Why All Jews Should Hate Halloween — and So Should Everybody Else 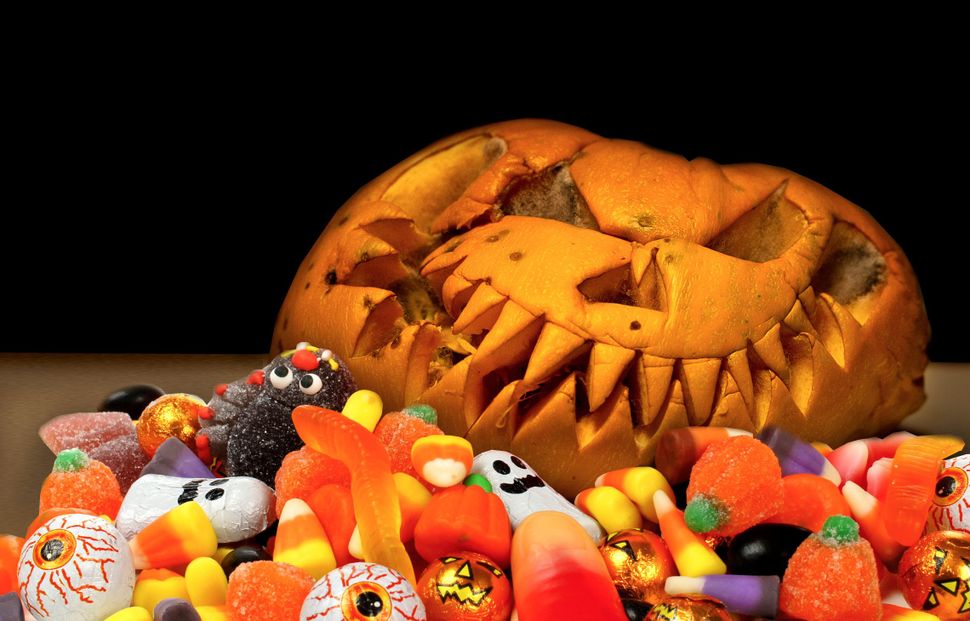 Because Halloween, as All Hallows’ Eve, has its roots in pagan mythology and the Christian calendar, Jews traditionally don’t celebrate it. But increasingly people (including Jews) around the world are celebrating American Halloween and that’s a terrible mistake.

As an Englishman I didn’t grow up with this particular pagan capitalist excrescence. I first saw the dressing up and Trick-or-Treating in the Spielberg film “E.T.” where Halloween observance seemed like a quaint local custom. Little did I realize that it would spread like kudzu through the supermarkets of the world, propagated by crass high-fructose corn syrup media.

As a Jew, I assumed that there was some basis for the holiday that I didn’t understand. You’d think the story would be pretty powerful to judge by the number of creepy skulls stuck on the wall. And corpses, for crying out loud, fake rotting dismembered corpses on buildings, though heaven forbid we watch the evening news about Syria.

Though Sukkot has much in common with it, Halloween for Jews is often how Purim is described because we dress up, drink and celebrate surviving the genocidal decree of an empire’s chief minister by reading the story of how we managed to do it. But no one I’ve spoken to during my 20 years in America can tell me the reason for their secular Halloween observance or the need to turn public spaces into Sam Raimi sets.

Granted, it’s an odd, transitional time of the year. In the northern hemisphere the harvest season has gone, the nights are getting darker and colder and winter beckons. There’s a carpe diem atmosphere to the holiday, a feeling that we should enjoy physical pleasures while we can.

For it is also a holiday of death. Pagan and Christian beliefs differ, but on the spiritual plane, they basically believe that souls are caught in transition but, through prayers and ritual, believers are helping them reach their final destination. Hence, I suppose, the skeletons, ghosts and ghouls — representatives of that post-dead, pre-afterlife stage.

But, in our globally interdependent lives, harvest is a theoretical concept, winter is mostly held at bay by lighting and heating and these vestigial customs are socially damaging. Spare a thought for parents outside the 1%, already spread thin as the butter on matzoh, who have to put together a prom-dress of a costume in their three seconds of personal time.

Perhaps it’s difficult to think critically of a custom that you’ve grown up with — even if it’s changed massively since the time of “E.T.” To avoid being a frog in boiling water though, perhaps we should consider a seasonally comparable English holiday. Every year in England on November 5, the country goes out to see fireworks, drink hot chocolate and, in a custom initiated by the Protestant majority in the 17th century, unthinkingly celebrate the transition of autumn into winter by burning Catholics in effigy. It’s fun, it’s universally celebrated, but it’s wrong.

If you are celebrating All Hallow’s Eve, go in peace, I respect your beliefs. If however, you are over 18 and celebrating American Halloween — that vacuous holiday of “dress like a sex object, eat sugar and decorate your house in cheap orange and black props from the Scream franchise” — I despair of your future.

The only spiritual need American Halloween (now celebrated in England too, I hear) seems to fulfill is the spiritual need to sell a whole bunch of polyester costumes and card decorations between Labor Day and Thanksgiving.

But even more than Christmas where popular culture retains at least a tenuous remembrance of the messianic birth (how about fighting against the capitalist war on Christmas, Mr. O’Reilly?), American Halloween has lost all links to its roots as a post-harvest reclamation of souls festival.

American Halloween is now purely a hollow carnival of consumption where we train our children to threaten neighbors for sweet poison. Where cheap stereotypes masquerade as costume. Where our teens learn that drinking and sexual objectification is an acceptable and effective way of celebrating life.

Born from a holiday where the normal rules can be relaxed for a day — where bosses and nobles are just flesh in the face of death — American Halloween has metastasized through a body politic that needs to rediscover a sense of propriety not relax its final dying grip. Social rules have become so democratized that popularity is truth, that vicious racism is once again commonplace and that a presidential candidate can openly lust after his daughter.

So put away your Kandy Korn and your sexy Kim Kardashian costumes, advise your neighbor with a mezuzah that dressing up as Anne Frank or Charlie Chan are equally bad ideas. Tell your teenage daughter that people will like her just as much — and respect her more — if she goes out with her underwear covered. Don’t burn Catholic dolls, or people — or of any other religion. And perhaps suggest to trick or treaters that they donate the canned fruit that you have given them to a food bank to help the needy through the cold winter that’s a coming.

Why All Jews Should Hate Halloween — and So Should Everybody Else