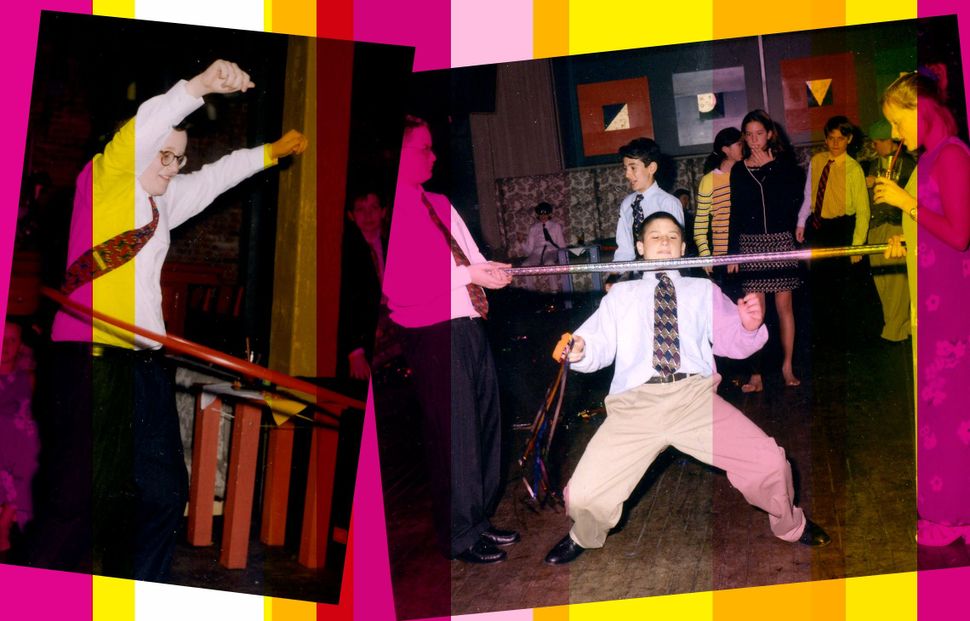 Image by Courtesy of Philip Eil

This is the third in a series of essays examining the Bar and Bat Mitzvah in America.

A bar mitzvah has many meanings. Mine was simultaneously a religious ceremony, a miniature family reunion, a finish line marking the end of years of Hebrew school and — still, to this day — the largest party ever thrown in my honor.

It was also one of the most stressful days of my life.

I don’t remember the food or the music or the weather or even the subject of my Torah portion. But, nearly 20 years later, I remember the gut-curdling dread that built up in the weeks beforehand, and the physical anxiety that made my legs literally tremble when I finally stepped onto the bimah to warble the day’s prayers and readings.

I empathize with that terrified teenage version of me. If you told me today that I would have to recite a Torah portion and a series of prayers to be sung in carefully rehearsed musical tones; that I would also have to write and deliver a speech analyzing the Torah portion, and that I would do all this in front of parents, family members and peers — well, I’d panic.

And yet, years before I could legally drive or vote, I completed this psychological gauntlet. It was, in hindsight, my introduction to the stresses of adult life.

The event took place April 4, 1998, at Temple Emanu-El in Providence, Rhode Island, an imposing room with marble pillars, wooden pews, stained-glass windows and a soaring domed ceiling. I wore a pinstriped, double-breasted black suit (the first suit I ever owned); a “husky”-sized button-down shirt; loafers, and a psychedelic Jerry Garcia-designed tie. I was dressed for business.

I can’t pinpoint exactly how long I had been prepping for the day’s events, but I know it wasn’t long enough. There was so much to focus on — writing the speech, memorizing word pronunciations, and learning how to handle the special metal finger-pointer-thing used while reading from the Torah.

As months dwindled into days before zero hour, an acute sense of foreboding set in. There were so many possibilities for errors, and there was absolutely no way to fade into the background. Some guests would be traveling hundreds of miles to see me perform. And this wasn’t merely public speaking, it was public singing. (I’ve sung publicly only one other time in my life: an ill-advised attempt at Al Green’s “Tired of Being Alone” at a karaoke bar in New York City during graduate school.)

At one point, days before the big event, I broke down in tears in the shower. I cried again in a final meeting with the cantor. I had never been that nervous.

And then it was showtime.

I survived the service without any major incidents. I didn’t drop the Torah. I didn’t forget any major portions of a prayer. I didn’t puke.

Photos from the party that followed show that I happily held one side of a limbo bar as my friends shuffled underneath, and that, later, I slow-danced with Katie Schwartz with a goofy grin on my face. One photo — a high-water mark of my preadolescent awkwardness — shows me hula hooping vigorously, with my arms raised in triumph and my tie flapping to the side. It is a portrait of euphoric relief. The ordeal was over.

In the years that followed, anxiety and stress emerged as a dominant theme in my life, a cloud that would return intermittently to shadow relationships, vacations and professional achievements. In college I developed a mild claustrophobia in classrooms and a fear of flying; out of nowhere, my heart would start thumping rapidly. During a junior-year trip to Italy, I had my first full-blown panic attack.

The years since have been marked by battles with waves of hypochondria, depression, anxiety and stress, and semi-successful attempts to reclaim equilibrium through therapy and self-care. I first started writing in my early 20s as a way of channeling and releasing my anxious thoughts. Eventually, finding that my ability to obsessively focus on a particular subject has its upsides, I pursued a career in journalism. But that, too, proved to be a minefield. Deadlines are stress factories, and bad news — the currency of the news world — fuels depression and disillusionment.

Recently, as stress and anxiety started claiming more of my energy and mental space, I started to explore where it all began. What were my first experiences of anxiety? There were some smaller early childhood moments, sure. (Once, on a particularly windy day when I was around 7, I refused to get out of the family minivan, fearing that I would blow away.) But a major mile marker was my bar mitzvah.

As a religious ritual, I confess, it never held much spiritual importance for me. (Afterward, I stopped going to Hebrew school and returned to synagogue only once or twice a year.) But it was a significant rite of psychological initiation. Adult life is filled with deadlines — taxes, bills, papers, presentations — and my bar mitzvah was my first big one. The workload dwarfed my other seventh-grade homework assignments, and the due date was entirely nonnegotiable. It was etched on the invitations my parents had sent: “Please join us when our son Philip Edward is called to the Torah as a bar mitzvah Saturday the fourth of April…” If I could go back and talk to my 12-year-old-self, I might slip him the business card of a good therapist, or hand him one of the self-help books that now line my bookshelf. I might tell him about the wonders of deep breathing, and the therapeutic benefits of long bike rides and writing in a journal.

Or maybe I would just show him that photo of me — of him — blissfully hula hooping at the bar mitzvah after-party. It’s photographic proof that there really was nothing to worry about.

Philip Eil is a freelance journalist and editor based in Providence, R.I.