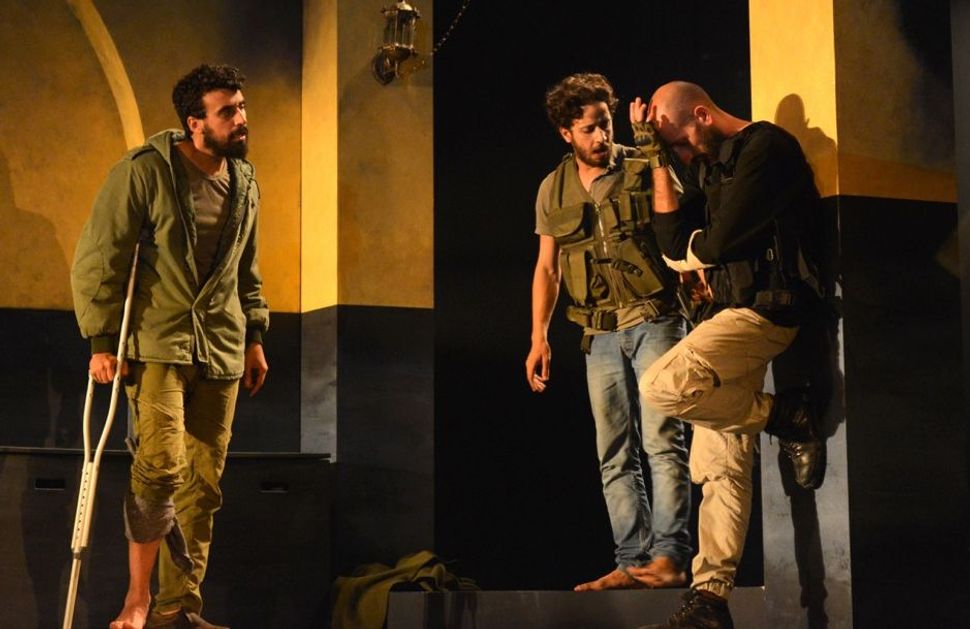 The play “The Siege,” created and performed by The Freedom Theater, which is based in the West Bank’s Jenin refugee camp, is itself under siege. It’s the latest lightning rod in an ongoing conflict over how Israel and the Palestinian territories are represented in theatrical productions.

The Palestinian play, which is currently being staged at New York University’s Skirball Theater, has sparked controversy from New York to Jerusalem. Heads of Jewish organizations and a member of the Israeli cabinet have unsuccessfully pressured the university to cancel performances. In response, multiple events are being held in conjunction with the play to explore art as resistance and the consequences of censorship.

“The Siege” focuses on the 39 days in 2002, in the middle of the Second Intifada, when Palestinian fighters occupied Bethlehem’s Church of the Nativity to try to escape the IDF soldiers who were searching out culprits responsible for suicide bombings that had been devastating Israel. The Palestinians – heroic fighters to their supporters and terrorists to their opponents – shared the church with its resident monks and some 200 civilians who had also sought refuge from the violence outside. Protracted negotiations with Israeli officials, led by Col. Lior Lotan, who spoke at NYU this past Sunday, led to the Palestinians turning themselves in. The militants were exiled to Gaza and to Europe.

Written from a Palestinian perspective, the play is performed in Arabic with English subtitles.

“With ‘The Siege’ we aim to tell the story behind the western propaganda, upending the dominant narrative of the time: ‘The terrorists have entered a holy place and have taken the priest and nuns hostage,’” write the play’s directors, Nabil Al-Raee and Zoe Lafferty, in a program note. “It is not a story of victimization but one of resistance in a situation of complete power imbalance.”

Critics of the play have included the ADL, World Jewish Congress and the director of NYU’s Taub Center for Israel Studies, Dr. Ronald Zweig.

“While we have not seen the play itself, based on past reviews we believe it presents a one-sided Palestinian view of the events of 2002 during some of the worst days of the Second Intifada,” the ADL wrote in a statement to the Forward. “During this period, Palestinian terrorists targeted Israeli civilians on city buses, in cafes, and even during a Passover Seder, killing hundreds.”

Even the Israeli government tried to get the play scotched. Member of Knesset Avi Dichter, now chair of the Knesset Foreign Relations Committee, headed the Israeli intelligence agency Shin Bet in 2002. He wrote to NYU President Andrew Hamilton asking that performances be cancelled, arguing “a hostile takeover of one of Christianity’s holiest sites must not be turned into ‘a struggle for survival and freedom,’ as it is described in the program.”

“New York University must not serve as fertile ground for this contemptible, anti-Semitic play that portrays terrorist attackers as freedom fighters,” he continued. “This is a play that is appropriate for Tehran or Beirut. Not for you, in New York!”

Conference of Presidents Executive Vice Chairman Malcolm Hoenein visited Bethlehem in an Israeli armored tank during the period depicted in the play. He told the Jewish News Service that “having witnessed firsthand the ‘siege,’ a blatant terrorist outrage, I am especially outraged at this presentation. Diminishing the true nature of this brutal attack serves to whitewash terrorism.” He did not return an inquiry from The Forward.

Zweig read the script months ago and saw the play last week. At least one key line was removed so actors now say they are fighting the occupation, not the existence of the state, Zweig told The Forward.

“We saw a watered-down version,” he said. “With no mention of the wave of suicide bombings in Israel or why Israel initiated the operation in Palestinian cities at that time, by focusing only on the difficult situation of the fighters in the church…they present an idealized version of the ‘struggle.’”

The imbroglio surrounding NYU’s production illustrates how theater has become a flashpoint in the fight over boycott, divestment and sanctions, or BDS, and the larger conflict between Israel and the Palestinian territories.

Most recently, succumbing to right-wing pressure, the American Jewish Historical Society canceled a planned reading of a play by Dan Fishback, a playwright who is also a member of the pro-BDS group Jewish Voice for Peace, at the Center for Jewish History. Fishback spoke at one of the NYU panel discussions about “Art as Resistance” on Sunday.

NYU continues to back “The Siege,” which runs through October 22.

This isn’t the first time “The Siege” has come up against pressure. Under artistic director Oskar Eustis, The Public Theater planned to stage it in New York last year but canceled the production for reasons never made public. Eustis spoke about “The Siege” at NYU this past Monday, and provided a blurb for the play’s website, calling it “brilliant and visceral,” and “necessary theater.” Sarah Schulman, a professor of English at the College of Staten Island, member of JVP’s advisory council and faculty advisor to the college’s chapter of Students for Justice in Palestine, claimed in her panel discussion Sunday that the play was cancelled at The Public after pressure from that theater’s Jewish board members.

Speakers at the two panel discussions Sunday included El-Raee, Columbia University Professor Rashid Khalidi and journalist Rula Jebreal, all Palestinian, as well as Jewish members of the theater community, like Fishback and Ari Roth of the Mosaic Theater in Washington.

“In Palestine theater is a form of resistance,” said El-Raee during the first discussion. During the second, Khalidi said theater as resistance is “having an enormous effect abroad.”

NYU’s Taub Center for Israel Studies ran its own program Sunday called “The Other Side of The Siege,” which featured a screening of the PBS Frontline program “The Siege of Bethlehem” and a talk by Col. Lotan, Israel’s chief negotiator during the siege. About 60 people attended, said Zweig.

The play has sold 85 percent of its seats, Jay Wegman, director of NYU’s Skirball Center for the Performing Arts, told The Forward.

Roth, who is founding artistic director of Washington’s Mosaic Theater Company, participated in the first NYU panel discussion, attended the second, went to the Taub Center’s program and proceeded to see “The Siege.”

The play “frightens people who hear about it…because it touches on third rail issues and third rail organizations that have been labeled forbidden,” Roth said in his panel discussion.

Roth started Mosaic in 2014, after being fired by the Washington D.C. Jewish Community Center’s Theater J. As Theater J’s head for 18 years Roth presented works including Israel’s Cameri Theater’s production of “Return to Haifa,” a play by the Jewish Israeli Boaz Ganon based on a novella by Ghassan Kanafani, a member of the Popular Front for the Liberation of Palestine, and “The Admission,” written by Jewish Israeli Motti Lerner about a massacre of Palestinian villagers in 1948. Roth also created “Voices from a Changing Middle East,” a theater festival which continues at Mosaic.

Speaking to the Forward, Roth said that theater censorship around issues concerning the relationship of Israel and the Palestinian territories started in the U.S. in 1989 when The Public Theater’s founder, the late Joseph Papp, cancelled a Palestinian play.

Censorship is also happening in Israel, Roth said during the panel. He recently returned from Israel and the Palestinian territories, and said “government appointed board members” are “infiltrating” the boards of directors of Israel’s nine regional theater companies. The government-appointed board members, he said, “are saying no to so much political work in the Israeli theater community.”

The use of financial pressure as a way to try to censor theatrical productions isn’t limited to issues related to Israel and the Palestinian territories. In June The Public Theater lost financial backing from two major corporate sponsors after its Central Park production of “Julius Caesar” portrayed the assassinated emperor as a Donald Trump-like figure.

Several speakers on the NYU panels decried the power of a small group of critics and board members to derail controversial theater. But Roth said that playwrights and producers are self-censoring and need to be more courageous about staging work that brings to life varied voices in the conflict between Israel and the Palestinian territories. “Criticism is useful,” Roth told The Forward. “It’s good to criticize a work of art. It’s not good to ban a work of art.”

“Everyone should be able to speak, but the whole story needs to be told,” said Zweig.