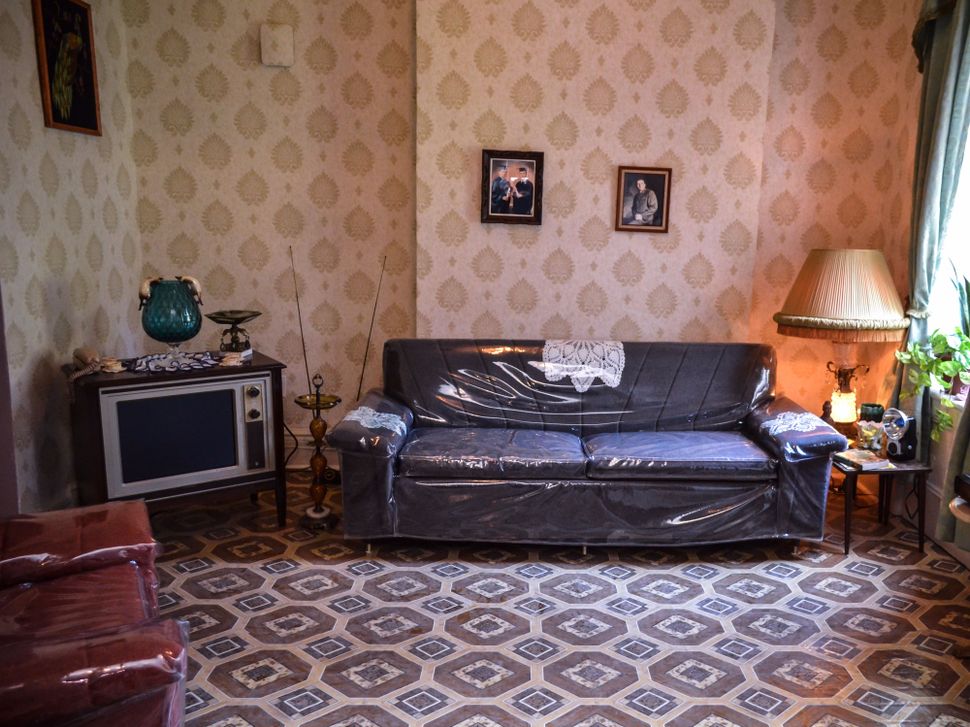 Image by Courtesy of The Tenement Museum

1955, the Lower East Side: Eight years after immigrating to the United States, two Holocaust survivors make a home in a six-room apartment. The rooms are big enough to live in comfortably, but only just. In a bedroom decorated in bright colors, its one slit of a window looking down at a staircase, their daughter Bella listens endlessly to Paul Anka’s rocking lovelorn ballad “Oh, Diana:” A Canadian singer, but a quintessentially American sound.

They will stay there until 1961, when Bella, the oldest daughter of Rivka and Kalman Epstein, is 13. Bella will marry, becoming Bella Epstein Seligsohn, move to Long Island, and name her children after the relatives her parents lost in the Holocaust. In 2013, when she first returns to visit the apartment at 103 Orchard Street, the mezuzah her parents had brought to the apartment almost six decades before is still hanging on the doorframe.

That mezuzah remains on that doorframe as part of The Tenement Museum’s new exhibit “Under One Roof.” It had been left there by the families that succeeded the Epsteins in the apartment at 103 Orchard Street, becoming, through the interceding years, an unwitting testament to the blending and evolution of cultures in one of New York’s most historically diverse neighborhoods. 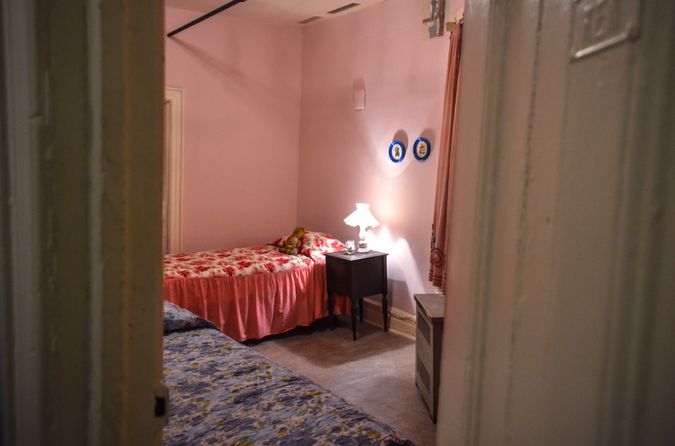 Bella Epstein Seligsohn’s childhood bedroom, recreated in “Under One Roof.” Image by Courtesy of The Tenement Museum

That evolution is the obvious and newly profound backdrop to “Under One Roof,” a tightly-packed exhibit in the Epsteins’ former apartment that recreates rooms from the apartments of three different immigrant families from three different countries who moved to 103 Orchard Street in the two decades that followed the end of World War II.

The Epsteins, who met in Germany’s Zeilsheim Displaced Persons camp, came to the United States after President Truman signed an executive order allowing wartime refugees to enter the country. Ramonita Rivera, later Ramonita Rivera Saez, came to New York as a single mother from Puerto Rico with her two sons, Andy and Jose, in 1955; she moved into an apartment at 103 Orchard in 1964, and stayed there until 2011. The Wong family moved into the same building in 1968, part a wave of Chinese immigrants who entered the United States after Congress relaxed controls on immigration from Asia with the passage of the Hart-Celler Act that same year. Mrs. Wong, the family’s matriarch, stayed in her apartment until 2014; she was the building’s final resident. 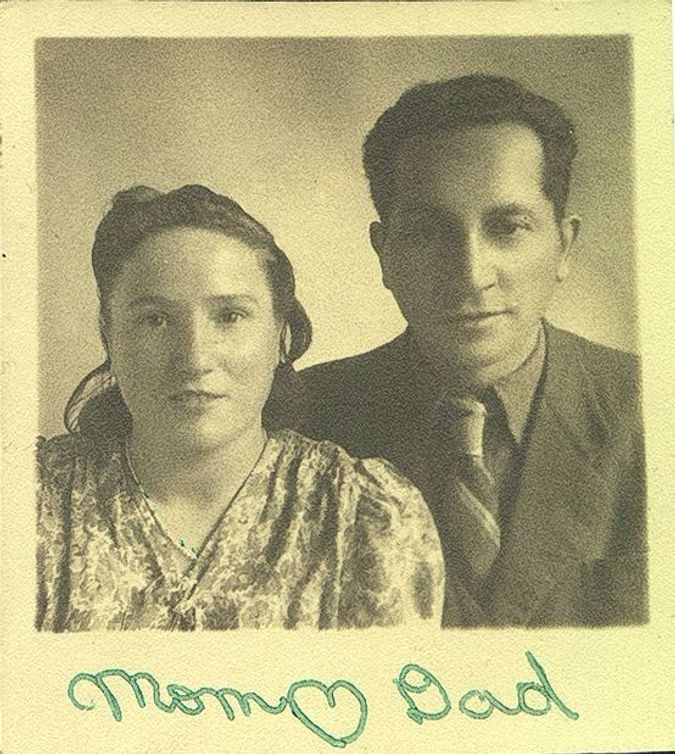 “Under One Roof” opens with recreated portions of the apartments lived in by each featured family: The Epsteins’ dining room and Bella and her sister’s bedroom, the Saez-Velez family’s kitchen and living room, the bedroom of three of the Wong family’s children. In an incongruous tonal shift from those intimate, almost romanticized living spaces, the exhibit’s final room is a recreated garment factory from the era. That industry employed one parent from each of the three families; the room housing the garment factory is modeled after the Chinatown garment factories of the 1960s and 70s, when Mrs. Wong began working in one.

There’s an easy, why-can’t-we-be-friends response to be had to the exhibit’s presentation of the blending of cultures that characterized the Lower East Side in the postwar years. Immigrants from all over the world lived on the same hallways, befriended each other and, like the families who preserved the Epsteins’ mezuzah, protected the symbols of each others’ heritages. Seligsohn, now 71, remembers her best friends from the neighborhood being Italian Catholic and African American.

The Epstein, Saez-Velez and Wong families didn’t actually share an apartment; it’s unclear to what extent any of them might have known each other. But the juxtaposition of all three family lives in a single living space carries an ambience of nostalgic peace: Surely in this time, when deportations are increasing both in frequency and cruelty, when the president is attempting to ban citizens of certain countries from setting foot in ours, we can learn something from this harmony?

That nostalgia was certainly a powerful force in shaping the exhibit. Seligsohn, who advised the Tenement Museum on the recreation of her family’s living spaces, told me over Skype that the experience of working on the exhibit “brought back so many memories of what the Lower East Side was like and what I felt like at that time.”

“Everybody was looking out for you,” she said. “To me it was a palace. Every culture came here, but together we formed another culture of the melting pot.”

Without debating the truth of that impression, it’s unclear how useful the lessons of “Under One Roof” really are. Immigrant families flocked to the Lower East Side in the postwar years because it was, at that point, an affordable hub for communities that they found to be familiar. In 2017, American society is struggling with enormous increases in economic inequality; with those come increasing inequality of housing opportunity. According to the Pew Research Center, the median household income of a white family in 2014 was $71,300, the median household income of an Asian family was over $70,000, and the median household income of a Hispanic family was close to $43,300. It’s a troubling fact that in today’s socioeconomic climate, the three families featured in the exhibit would be unlikely to all be found living in close proximity.

Ideologically, “Under One Roof” offers a realistic comfort: The life of immigrants is not and never has been easy, but brought together, as Seligsohn said, their intertwined experiences can create a vibrant, compassionate new culture. (As the recreated garment factory shows, that culture could also be exploitative and harsh: Workplace injuries, overlong hours and exposure to dangerous chemicals were all, unsurprisingly, routine.) The question of how a culture that reaps similar benefits from diversity might be created in the face of contemporary socioeconomic struggles, appended to the United States’ already devastating history of housing segregation, remains unresolved.

“I probably never left it,” Seligsohn said of her family’s old apartment. “What you bring up a child to be, that child is. The core of what was instilled in us remained.”

We can all hope for our society to embody the best values on display at 103 Orchard Street. For it to do so, families with backgrounds as disparate as those of the Epstein, Saez-Velez and Wong families will have to have more than passing exposure to one another. That troubling fact, less flashy than the more obvious appeal for compassion and respect for the experience and contributions of immigrants, is what makes “Under One Roof” most compellingly relevant. We may have a lot to learn from the families to whom it introduces us; without meaningful economic reform, we may never have the chance.