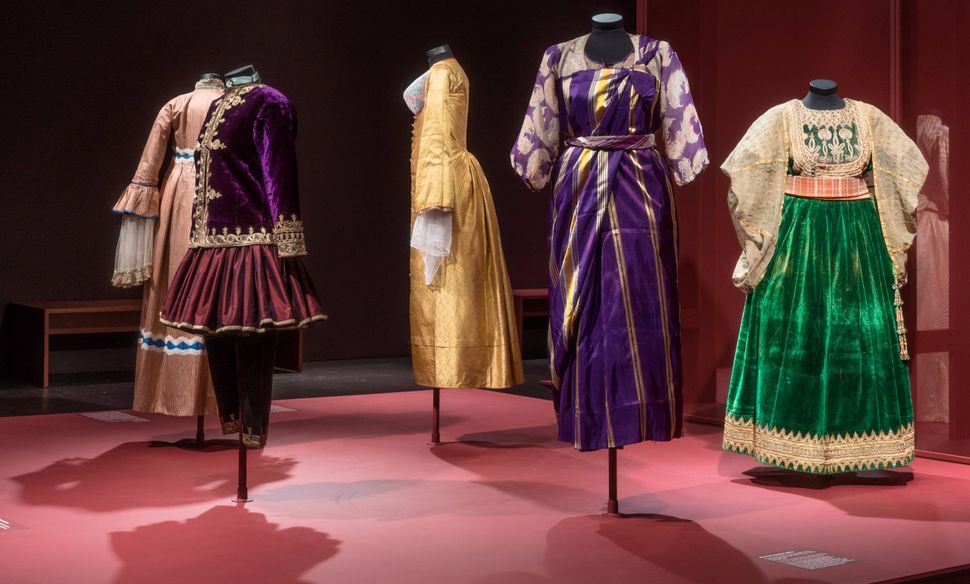 A new exhibit at Manhattan’s Jewish Museum, “Veiled Meanings,” opens on a striking note, showcasing three different veiled women’s garments that many Americans would not, on first look, associate with Jews, including the Afghani chadur.

The exhibit, a brief chronicle of garments common in Jewish communities of the past, has the potential to be a fascinating introduction to the astonishing diversity of Jewish life that, over the centuries, sprung up across the globe. Featuring garments from Germany, Iran, Yemen, Uzbekistan and India, among many others, the collection, drawn from that of Jerusalem’s Israel Museum, is a flurry of bright colors, dramatic shapes and astonishing hand-stitched embellishment.

Yet something about the presentation of the cultures from which the exhibit’s contents originated struck two Forward writers, Michelle Honig and Talya Zax, as troubling. The two discussed the exhibit; read excerpts of that conversation, below.

Michelle Honig: I felt there were some parts of the exhibit that were surprising, like the fact that Jewish women in Islamic countries wore the chadur.

Talya Zax: The exhibit showed the way culture changes when it moves. These clothes don’t make a comment on whether that is right or wrong, but they do show that this is how it’s always been: The culture we think of as our distinct culture is, in fact, anything but distinct.

MH: There were sumptuary laws that applied specifically to Jews, and you saw that in this exhibit: A lot of Jews were required to wear this garment to denote that they were Jews. Maybe the point of calling it “Veiled Meanings” is that they wanted to showcase cultures of Judaism that haven’t been showcased, that haven’t been dissected. And Ashkenazic Jewry has been dissected over and over again. But in a way, they other-ized it as well.

TZ: They could have drawn attention to Sephardic culture in a way that was a bit more cohesive.

MH: The truth is that fashion exhibits will always be other-ing, mostly because you’re removing the person from the garment. And garments are intrinsically human. When you put clothes on a mannequin, it almost becomes lifeless, which is compounded by the fact that these are cultures that we don’t really understand. Even though they did mention stories behind some of the dresses, it would have been nice to have a photo or a painting showing people living in them, instead of just explaining them.

TZ: One of the objects that I found most moving was the lulwi, a dress from Yemen that women wore the first Shabbat after they gave birth, which would also go over their shroud garment when they were buried. I also found it moving to see the wedding dresses that, after women passed away, would get repurposed to be Torah coverings or in some way connected to the worship-life of their community. These were congregations where women probably wouldn’t have been up there at the bima. But I think it’s interesting that after death, a woman’s garment can become part of that more prominent life. Depending on your perspective, it’s either very beautiful or a little troubling.

MH: Conceptually, that section of the exhibit was great and should have been the exhibit’s main focus. However, I felt that the exhibit’s main focus was further back with that wedding dress section. You had the huge, white American 1940s gown and, behind it, four other wedding garments from Sephardic countries, grouped together; it almost seemed like this metaphor for this dominance of Ashkenazic Jewry versus these smaller communities. And it was literally veiled, in this purple screened-off area: It was the most aesthetically powerful part, but it shouldn’t have been. The most aesthetically powerful part should have also been the most conceptually powerful part.

TZ: The “Exposing the Unseen” section is the exhibit’s largest section, which is where they display the undergarments. They wrote, in the press release, about how these garments, which were supposed to be only for women to see because they were hidden, were so elaborately done to draw attention to the attributes that they were trying to mask. I found that to be — I don’t want to say a fetishizing, but a fetishizing perspective. Instead of making it about women’s experience of that garment, it was about sort of sensationalizing it.

TZ: That’s crucial, because a lot of us conceive of diaspora Jews, before they came to the U.S., as living poor, isolated lives. Some probably were, but I remember I went to see this exhibit on postcards of old European synagogues at the Museum at Eldridge Street last year, and I was like: When people talk about the shtetl, they never say that they had synagogues that went back to 1200.

MH: The shtetl almost seems like this temporary space where everything is haphazard.

TZ: Admittedly, this exhibit wasn’t super shtetl-oriented. But you see these garments that were billed as everyday garments, and you think, “I want to know what this says about the community.” There was one wedding dress, outside of the white wedding dress section: It was red silk, and it said that a girl and her father found the silk pods, collected and spun it, they dyed and wove the silk and sewed the dress. I want to understand how that fit into their lifestyle. I want to understand what it looked like on a day-to-day basis.

MH: The exhibit could have used extant documents, like letters or photos. People going to an exhibit want direction; they want to be told what you’re trying to say. You need to have a narrative and you need to have a theme. I would have enjoyed an exhibit with just wedding dresses from every community.

MH: However, I thought that they were smart about their exhibit design. Everything was veiled. The garments were beautiful. You felt like there was a certain amount of wealth. Wealthy people tend to preserve their stuff, as opposed to poor people, who tend to work their clothes to the bone. The truth is, fashion exhibits in general don’t tend to talk about poor people because poor people in history are, sartorially, not that interesting. They are interesting in how they lived in their clothes: They were the working class, and they worked in them.

TZ: This actually brings out a key point: I think this exhibit was torn between wanting to provide a snapshot into a series of communities and wanting to give us something aesthetically pleasing to look at. If it had been about the community, I would want at least some attention to be paid, even if the garments weren’t there, to what poor people would have worn.

On a personal note, as a Jew writing about culture I think a lot about tradition. And I’m getting a little weary of seeing exhibits where the primary emotional draw is a hearkening to tradition. I felt that the primary draw of this, for Jews who came to see it, was either supposed to be curiosity paired with regret for the decline of these Jewish communities, or a welling up of Jewish identity, of feeling of “I come from these communities with these elaborate garments.” I would like to see an exhibit like this try to create a more nuanced emotional landscape for the people who come to see it.

MH: The thing is, when you do historical dress, it’s not another story of high fashion — it’s a human story. Because the humanity of it is what brings people, and that’s what moves them. And a lot of historical fashion exhibits fall flat in that sense, because they become this bland overview of these things that look like stuff. You want to feel something when you go to an exhibit, and in this one, I didn’t really feel anything.