Philip Roth Is Immersing Himself In Jewish History, And Doesn’t Know How To Respond To #MeToo 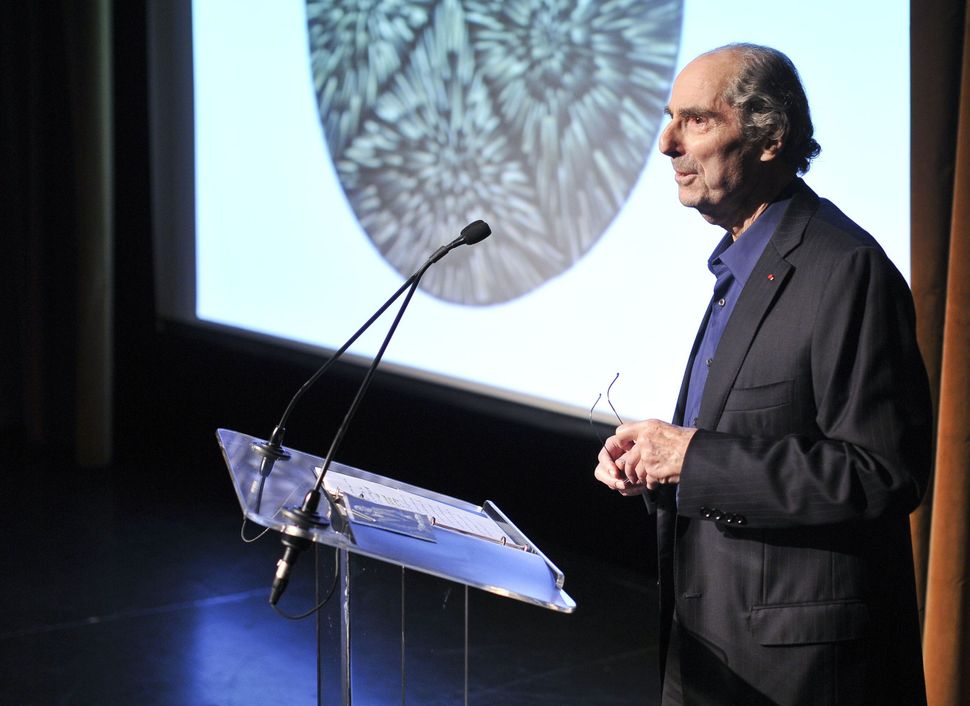 Philip Roth, almost 85 years old and seven years into retirement, is just another Upper West Sider who might be mistaken for Bernie Sanders.

Except, that is, for the persistently thwarted Nobel hopes, the all-too-timely novels about American demagoguery and the graphic and controversial portrayals of male sexuality.

In a new interview with Charles McGrath in The New York Times Book Review, Roth, over email, expounded on all those subjects — minus, tellingly, the Nobel.

Could he have predicted the internal dangers, and the one rotund orange one that governs them all, now faced by the country? No, he would never “have imagined that the 21st-century catastrophe to befall the U.S.A., the most debasing of disasters, would appear not, say, in the terrifying guise of an Orwellian Big Brother but in the ominously ridiculous commedia dell’arte figure of the boastful buffoon.”

Does he consider his 2004 novel “The Plot Against America,” often cited as a literary anticipation of the authoritarian threat now looming over the country, to be as prescient as popularly claimed? No, because that novel’s would-be tyrant Charles Lindbergh, despite his inclinations towards the racist and anti-Semitic, had earned his lofty place in the American imagination. “Trump, by comparison, is a massive fraud, the evil sum of his deficiencies, devoid of everything but the hollow ideology of a megalomaniac.”

No, he’s not surprised by revelations of pernicious predation. Nor does he offer any hope, for those of us — women especially — who hope that men might learn to become other than as they are. “I haven’t shunned the hard facts in these fictions of why and how and when tumescent men do what they do,” Roth writes; one wonders, in both the facts and fictions, where the opportunity might be for women to live in slightly less fear.

Yet the motions of history – whose narrative it prizes, the stem and continuation of fatal injustice, the desolate place left in the heart of it all for art — preoccupy him, night and day. Having set down his pen, he’s devoted himself to reading, mostly nonfiction. His recent docket has included three books each by Ta-Nehisi Coates and Stephen Greenblatt, Bruce Springsteen’s autobiography and “American Slavery, American Freedom,” Edmund Morgan’s exploration of the two inextricably entwined narratives.

Roth saved special words of praise for Steven J. Zipperstein’s “Pogrom: Kishinev and the Tilt of History,” which will be released in March of this year; ” Zipperstein pinpoints the moment at the start of the 20th century when the Jewish predicament in Europe turned deadly in a way that foretold the end of everything,” Roth commented. Yet that particular Jewish predicament is only one of those on Roth’s mind: See, also, “The Jewish Century” by Yuri Slezkine, Isaiah Berlin’s set of artistic elegies in “Personal Impressions,” and R.B. Kitaj’s autobiography “Confessions of an Old Jewish Painter.” The perils, pleasures, qualms and mysteries of Judaism remain a fascination, both in times past and the modern day.

Enough to warm this pondering Jew’s heart, but not that of this equally pondering woman: The only female author Roth mentions is the redoubtable Edna O’Brien. (He’s reading her biography of James Joyce.) Save inquiries as to the importance of equality in art for another time, but any investigation of history in which men’s voices all but entirely dominate is only half an investigation.

Roth is nearly 85, and in his telling, grateful to live each subsequent day. Perhaps it’s time to let preferences and prejudices, unconscious or otherwise, rest. Then again, as some have been saying: Time’s up.

Philip Roth Is Immersing Himself In Jewish History, And Doesn’t Know How To Respond To #MeToo