This UFO Changes Everything 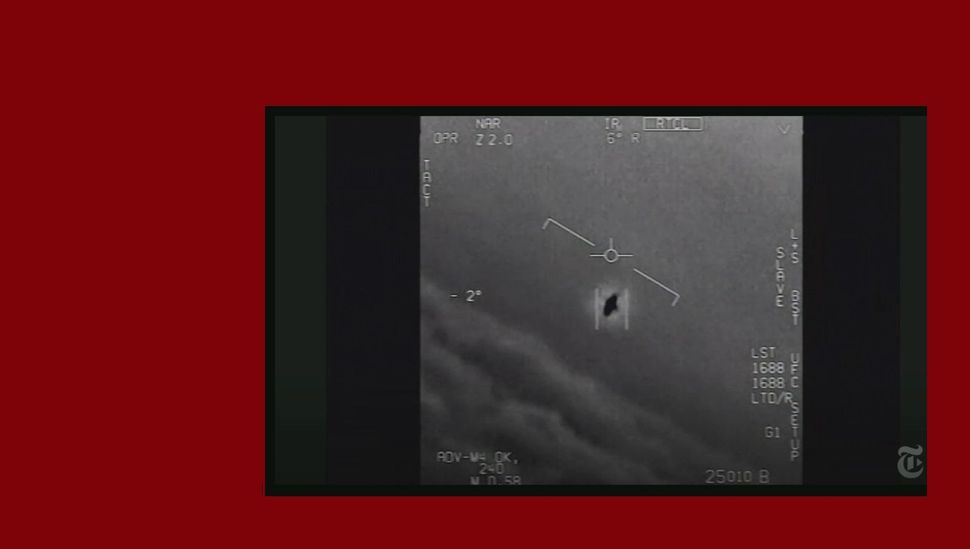 UFO footage released by the Pentagon in January 2018. Image by Image: Pentagon/NYTimes

We at the Forward are delighted to welcome Marty Kaplan to his first column for the Forward. An award-winning columnist for Huffpo and the Los Angeles Jewish Journal, Marty will be writing his “Oh Kaplan, My Kaplan” column for us twice a month. His eagle-eyed view from the West Coast promises to be eye-opening, heart-rending and occasionally jaw-droppingly insightful! He starts with UFOs and promises to go even further.

‘Look at that thing, dude!”

A hundred miles off the coast of San Diego, two Navy fighter pilots on a Super Hornets training mission spot a whitish, oval-shaped aircraft of some kind flying on an unearthly trajectory at crazy speeds. You can hear their astonishment on the 2004 recording.

“It accelerated like nothing I’ve ever seen,” one of the pilots, Commander David Fravor, told The New York Times when the video of what they witnessed was made public by the Pentagon at the end of 2017. He said he was “pretty weirded out.”

I was, too, when I saw it, though I was as much thrilled as freaked out.

I’ve been a sci-fi fan since I first read Ray Bradbury’s “The Martian Chronicles,” but I’ve never really been much of a UFO believer; I’ve always been skeptical of people’s stories about being abducted by aliens, and I think meteorology, psychology and other terrestrial sciences account nicely for the reported anomalies.

Yet this story, straight from the Department of Defense, got to me. The “Oh, my God!” that I said aloud when I watched the recording was less of a WTF OMG than a metaphysical skip of my heart. It was a this-changes-everything thunderclap, a disruptive wow akin to what Abraham Joshua Heschel calls “radical amazement.” It injected an unknown into the narrative of human history — a scary suspense, but also a terrible beauty. It reminded me of Ralph Waldo Emerson’s strange words in his essay on “Nature” about the exhilaration that swept him as he crossed a bare common under a clouded sky: “I am glad to the brink of fear.”

I’ve been wrestling with the thrill that video gave me, trying to figure out why I root so fiercely for tectonic change. Part of it must be my yearning for the re-enchantment of the world. There’s something irrevocably sad about the secular ditch that we’ve ridden reason into. We’ve figured out that materialism and randomness have at least as much explanatory power as divinity and Scripture. The good news about that is its upending of religious orthodoxy. Not so good is how that drains the universe of purpose and meaning. What a downer: We own the postmodern insight that everything is socially constructed, but at the cost of discovering that everything turns out to be nothing.

So I tell myself that the reason I love this UFO testimony is that it puts wonderment back into play. It wrests the cosmos from the string theorists and the hadron colliders. It gives a good name to the sense that there are more things in heaven and earth than are dreamed of in our philosophy. It stands witness to splendor. It makes the starry night sublime.

But that may be wishful thinking on my part. It could be that what ails our Zeitgeist isn’t as highfalutin as spiritual and intellectual exhaustion. Maybe we’re just bored. Maybe it’s not that our souls are sick; it’s that our attention has the heebie-jeebies.

What do we call something that grabs and holds our restless attention? Entertainment. And between Twitter and cable news, smartphones and streaming, it’s no wonder we’re addicted to the dopamine of the click. What confers on something the power to make us attend to it? Novelty does that. So does story. Change captivates us, as does danger; they’re the engine of story. A credible UFO sighting? Talk about breaking news. What could be more entertaining — better junk for us junkies — than that?

Sure, I may ache for Emersonian transcendence, but in our epidemic of distraction, Splendorama hijacks our attention more irresistibly than mere splendor. Splendorama delivers reality to us as a reality show, sells our eyeballs to advertisers, tosses bananas to keep the ol’ monkey mind jumping.

And because the business model of entertainment, especially social media, requires distracting and addicting us, its consequences reach beyond how we spend our time and money. At Davos, George Soros said that Facebook, Google and other internet technologies monopolies “are inducing people to give up their autonomy,” their “freedom of mind,” as John Stuart Mill called it. “People without the freedom of mind,” Soros warned, “can be easily manipulated” — not just our commercial choices, but also our political decisions. Just look at the 2016 presidential elections, and not only at the Russians’ mischief, but also the ways we played ourselves.

We couldn’t have wanted a more riveting ringmaster for that circus than the host of “Celebrity Apprentice.” He arose from our own toxins: It’s payback for our pollution. In the 20th-century version of that horror, it was atomic testing in the Pacific — science run amok — that awakened an undersea monster to terrorize us. Today, it’s digital fallout — silicon hubris — that’s fatal to us, and the creature it created is Godzilla with a carrottop.

Trump’s platform was, “Let me entertain you.” I don’t exempt myself from its appeal; I felt that undertow. I saw my doppelgänger in a Bernie Sanders supporter during the primaries who told a New York Times reporter at an Anaheim, California, rally that if Sanders didn’t get the nomination, he wouldn’t vote for Hillary Clinton because she’d be boring, but Donald Trump would be exciting.

A dark side of me wants to see what happens if Trump is in. There is going to be some kind of change, and even if it’s like a Nazi-type change, people are so drama-filled. They want to see stuff like that happen. It’s like reality TV. You don’t just want to see everybody be happy with each other. You want to see someone fighting somebody.

Look at that Charlottesville, Virginia, thing, dude. Awesome for ratings. Awful for America.

But awe? That’s something else. Awe is when ordinary life discloses the sacred to us — it’s when we apprehend what Wordsworth called “splendor in the grass.” My UFO freakout wasn’t awe — it was a thrill ride.

The French mystic Simone Weil said that “attention, taken to its highest degree, is the same thing as prayer.” I love that: Attention is prayer. Meditation, mindfulness, yoga, breath work, mandala… : Attention is the currency of all contemplative practices, secular and religious. But attention, that same faculty, also makes the Splendorama cash register go ka-ching and Trump’s tweets go viral. No wonder I’m pretty weirded out.

This UFO Changes Everything