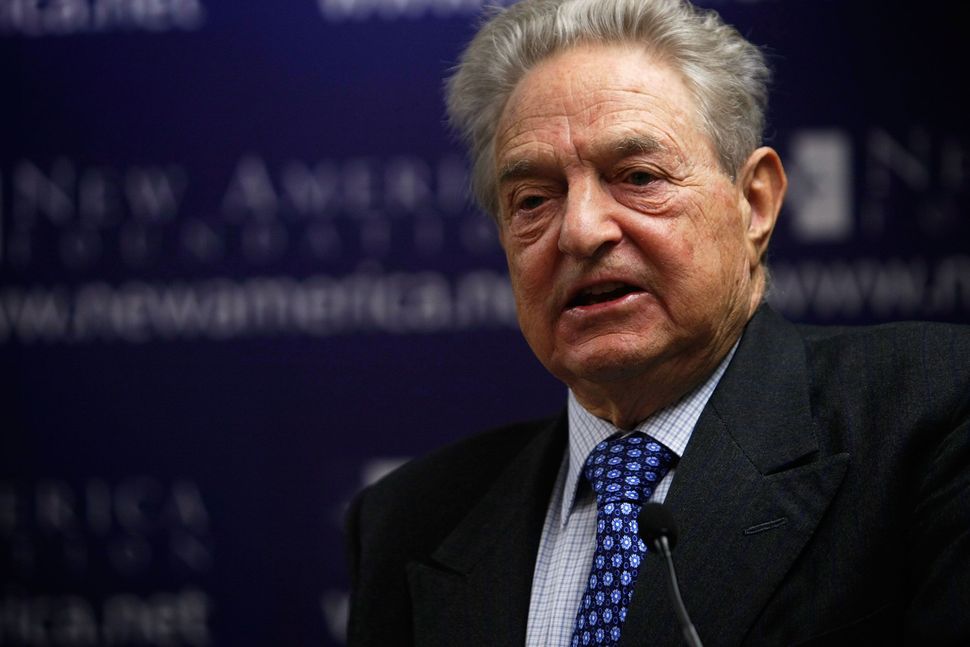 This week, Jewish billionaire George Soros came out storming against the internet.

At the global gathering of the financially and politically powerful at the World Economic Forum in Davos, Soros gave a long, withering speech on the state of the world. Part of his analysis was directed at the politics of Russia, the EU, China and the U.S. But the majority was directed at “The IT monopolies.”

In so doing, Soros was joining many who have begun to speak out against the dangers of unfettered technology, from Mark Zuckerberg to Lisa Goldman in these pages.

But the problems Soros and others outline may just find their solution among the faithful. We can all learn from ultra-Orthodox Jews and, surprisingly, the Amish, about how to adopt, and curb the destructive forces of tech.

Soros’s critique was twofold. First, as businesses, the big IT companies are bound to maximize markets and earning and, as such, they need to grow. That means they need to grow beyond the so-called “free world” into areas of the world governed by authoritarian regimes.

This spells disaster on a moral front, argues Soros:

US-based IT monopolies are already tempted to compromise themselves in order to gain entrance to these vast and fast growing markets. The dictatorial leaders in these countries may be only too happy to collaborate with them since they want to improve their methods of control over their own populations and expand their power and influence in the United States and the rest of the world.

Rather than bring democracy to the repressed as we once hoped, the movement of Apple, Google, Facebook, Amazon and their ilk into these markets will change the nature of those businesses. Google, with its motto of “Don’t be evil,” and its successor parent company Alphabet, with “Do the right thing,” are now in a situation where they are deeply tempted to collaborate with repressive regimes.

But the moral threat is second to the security threat. Mix state-based tyranny with corporate-gleaned intimate personal knowledge and you have a profound threat to society. As Soros puts it:

There could be an alliance between authoritarian states and these large, data-rich IT monopolies that would bring together nascent systems of corporate surveillance with an already developed system of state-sponsored surveillance. This may well result in a web of totalitarian control the likes of which not even Aldous Huxley or George Orwell could have imagined.

The other threat that Soros posits is the problem of what Orwell might have called “simplethink.” Effectively, television in a mild way and social media in a deeply pervasive way, shape the way in which we read, the way in which we think. They distract us from what’s important. They prevent us from thinking clearly about how we act in the world and how the world could be.

Democracy relies on an active, thoughtful demos — a citizenry able to engage in the shaping of their own society. Soros worries that the IT monopolies are eroding that ability to engage, perhaps terminally.

The power to shape people’s attention is increasingly concentrated in the hands of a few companies. It takes a real effort to assert and defend what John Stuart Mill called “the freedom of mind.” There is a possibility that once lost, people who grow up in the digital age will have difficulty in regaining it. This may have far-reaching political consequences. People without the freedom of mind can be easily manipulated.

Rabbi Shmuel Halevi Wosner, an important rabbinic decisor who passed away in 2015, was the Israeli author of the Orthodox Jewish ruling that the internet should not be used at all. Although later amended to allow for use in case of business need, with appropriate filters, it led — among other things — to a massive “asifa” in 2012, a gathering of 40,000 ultra-Orthodox Jews at New York’s Citi Field to hear about the dangers of the internet.

Much of the coverage dwelt on the irony of an anti-internet event garnering so much social media coverage (“Rabbis anti-internet Meeting Is Live-Streamed”). But there was something deeply laudable about the event. It represented a number of values-driven communities convening to discuss a new technology and to decide how to incorporate it into their lives.

While I don’t necessarily agree with the outcomes or the modes of discussion of the asifa (it omitted women, for one thing), I think that a convention on the internet is exactly what we need.

The Amish get a bad rap as luddites. But, actually, we as Jews and as Americans, need to take a leaf out of their book. Kevin Kelly, founder of the technology magazine Wired, writes of their deliberative attitude in deciding when to take up new technologies. The Amish are selective, for one thing, banning more often than adopting new tech. And they evaluate new things “by experience instead of by theory.” The Amish also believe that new technologies must “enhance family and community and distance themselves from the outside world,” in other words, that they must reflect Amish values. And finally, the choice to adopt a new technology is not an individual one but a communal one.

While living like the Amish is not necessarily an ideal to strive for, I think their caution with regards to tech is admirable, and worth incorporating into our modern lives.

And yet, a first step is necessary. In order to be selective about the technology we are faced with, we need to know what is important to us and how these tools will affect that. In order to shape the technology that is being developed, we need to be clear about the outcomes we want our tools to achieve. Because, as time goes by, with the growth of automation and artificial intelligence, more of our jobs and society will be affected by the IT monopolists.

So this is the challenge that the internet poses to every Jewish community and every human society in the world today. In order to shape a promising future from the dystopia that Soros paints, we need to have a human view of the society we want to live in, the communities we want to be a part of and the way that we want to interact with the people around us.

And then we need to shape our technologies — our hardware, software, algorithms and user interfaces — to achieve those goals. Maybe those goals are life, liberty and the pursuit of happiness, maybe our goal is just to love your neighbor, but let’s have that conversation, not get swept away in the tide of addictive social media.