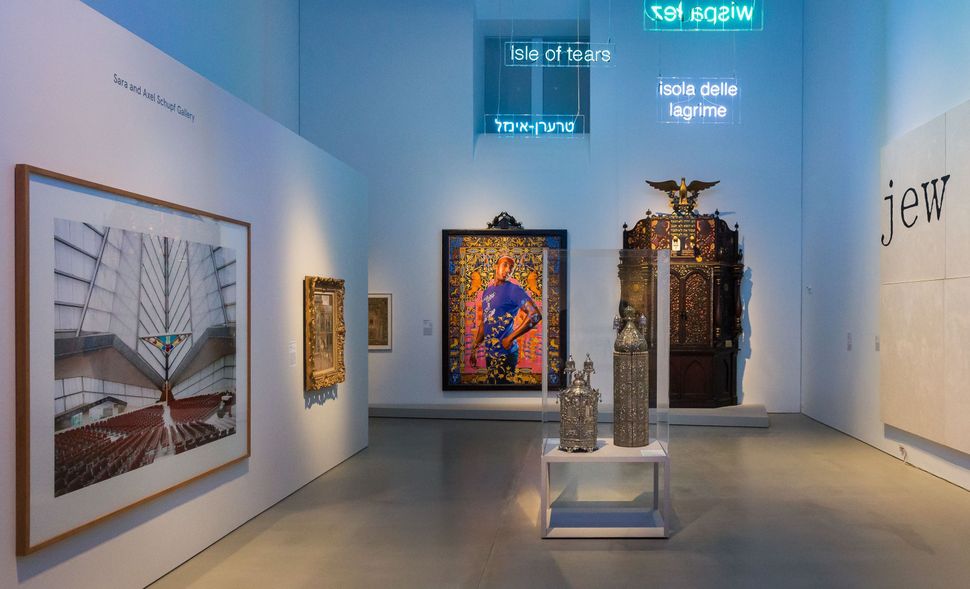 If you wish to be radicalized as a Jew, one unconventional way to do so would be to visit the Jewish Museum. While a comfortably endowed cultural institution housed in a 5th Avenue mansion may not sound like a hotbed of revolution, one of the near-600 items in the new permanent exhibit “Scenes from the Collection” serves to unexpectedly boil the blood. It’s a painting by Mark Rothko, best known for his enormous, abstract color field paintings, in the exhibit’s first section, titled “Constellations.”

The abstract expressionist canvas, titled “Crucifix,” is standard-sized for most artists but miniscule for Rothko, showing a side of its artist with which most viewers are likely unacquainted. The painting’s muted colors — mum, one presumes, in the face of horror — form not overlapping blocks and panes, but disjointed and disconnected body parts, dead and stacked as if piled in a mass grave. Painted during the Holocaust, the work demands two responses. First: A reflection on what it means that the largest global religion is based, in large part, on the worship of a dead Jewish body. Second, a question: Jewish bodies have repeated Jesus’ sacrifice millions of times. Who among the devout will worship them? 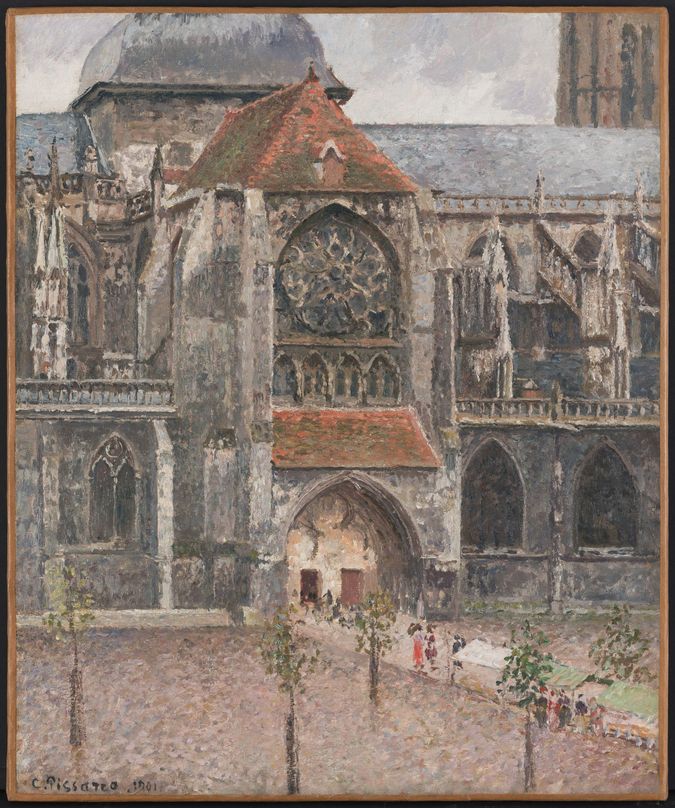 Camille Pissarro, “Portal of the Church of Saint-Jacques in Dieppe” (1901). Image by Courtesy of the Jewish Museum

And yet. Would-be radicals, once they move past the Rothko, will encounter a striking juxtaposition: Candida Höfer’s photo of a Frank Lloyd Wright-designed Philadelphia synagogue next to the Impressionist Camille Pissarro’s painting of a church in Dieppe, France. A light-filled Jewish sanctuary, designed by a Unitarian; a Catholic church, painted in affectionate, soft tones by a Jew. We live together; living together is the only real route to peace. What good radicalization?

The tension between various realizations of Jewish identity — radical, peaceable, tormented, comedic, platitudinous — is the animating force behind “Scenes from the Collection,” to revealing if not reliably positive effect. The exhibit is best when it is vehement: See, for instance, the heartbreakingly detailed analysis of a bracelet made by a prisoner in Theresienstadt that forms the centerpiece of a section called “Masterpieces and Curiosities.” 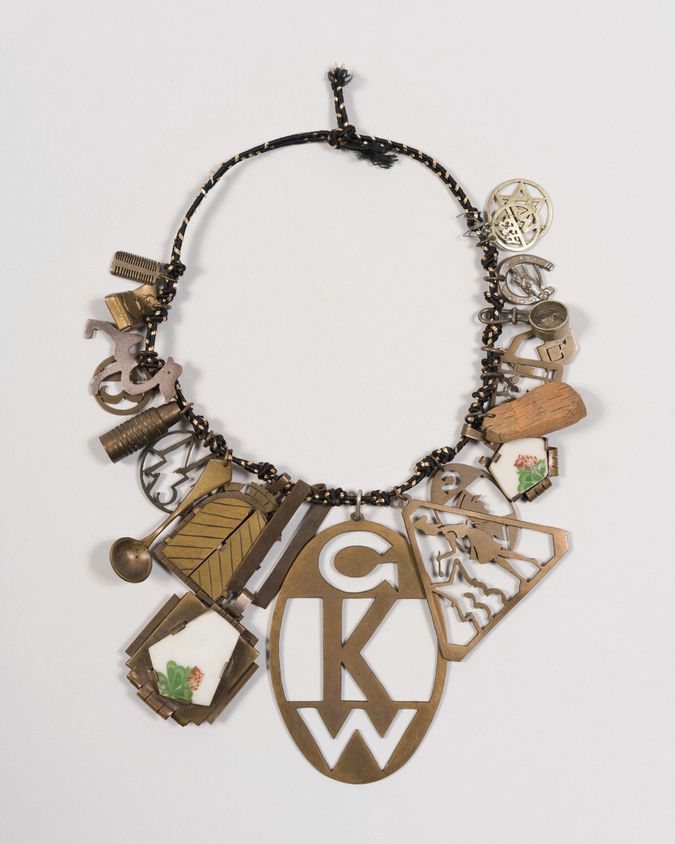 Greta Perlman’s bracelet, made in Theresienstadt. Image by Courtesy of the Estate of Greta Perlman

Yet those pieces’ resonance is somewhat deadened by their juxtaposition with the more aimless, cloying and cute representations of Jewishness with which the exhibit is rife. After Rothko, it’s difficult to muster enthusiasm, for instance, for “Signs and Symbols,” a room filled with a mix of Judaica and visual art that is focused on the Star of David. Often lovely and always tame, its contents, if hung directly alongside the Rothko or the Pissarro, would hardly pass muster. It’s unclear what the point of the grouping might be, aside from articulating the rather obvious point that the Star of David is an important Jewish symbol with a fraught past and present.

The exhibit’s unusual framework — each section, called a scene, reflects a different form of Jewish artistic production — helps explain both its tonal strangeness and a particular quandary of the Jewish Museum. Staging selections from the Museum’s vast collection in this way serves to neatly remove, in theory, the difficulty of drawing thematic connections within a collection that is part fine art and part historical record. In practice, that choice of framing makes the Museum’s split character all the more noticeable. Yet that weakness paradoxically makes “Scenes from the Collection” a surprisingly illuminating examination of a question at the heart of much contemporary Jewish culture: What does it mean to be Jewish, and what could it mean?

The exhibit’s answer to the former question, intentional or not, is unforgiving: To be Jewish is to be restrained by your history. There is an unquestionable clamoring, in scenes like “Signs and Symbols” or “Accumulations,” which displays hundreds of late-19th and early-20th century stereographs of what is now Israel — stereographs are, effectively, slides that show a three-dimensional image — to have the simple fact of Jewish history and culture acknowledged.

Regarding the question of what it might mean to be Jewish, “Constellations,” plays host to the most resonant ideas, as demonstrated by the dialogue invited by the trio of works by Rothko, Höfer and Pissarro. Another evocative trio in that section centers on a painting by Kehinde Wiley (this week in the news for his newly unveiled portrait of Barack Obama) in which the young Ethiopian-Israeli Alios Itzhak looks out from an ornately-patterned background with a searching, confrontational pride. That painting is hung next to a 19th-century Ukrainian mizrah, or plaque intended to mark a house’s Jerusalem-facing wall, that inspired its background. Standing on the portrait’s other side is one of its other aesthetic inspirations, an 1899 Torah ark from Sioux City, Iowa’s Adath Yeshurun synagogue. 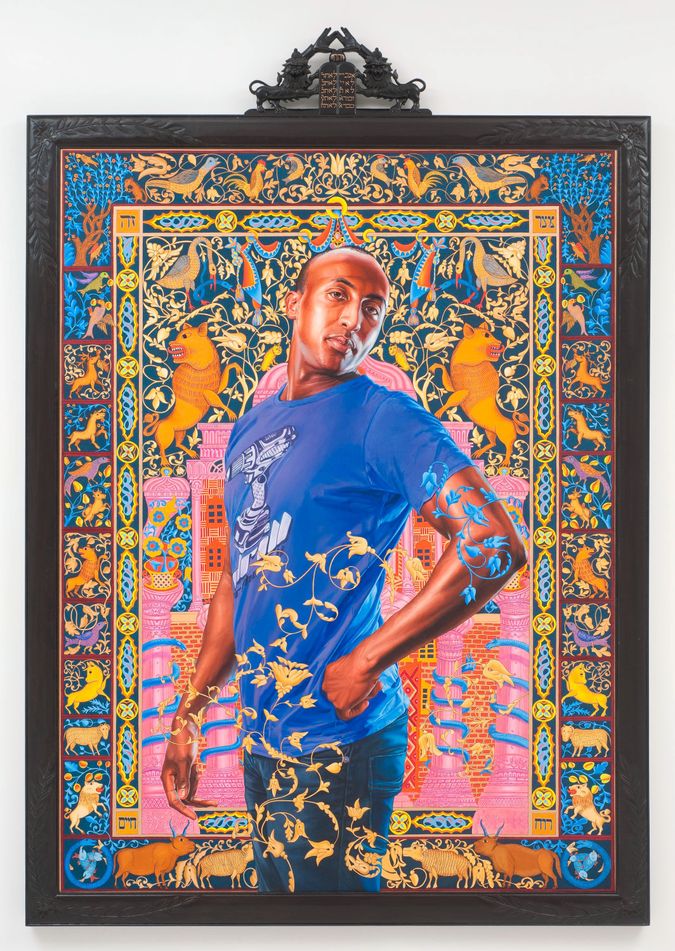 Those three objects might be understood to be making timely points about, say, the always-tepid and currently hostile attitude of Israel towards Jews of color, the cultural blending inherent to modern iterations of Jewish culture, and the complicated experience of diaspora. Yet the grouping is more than aesthetically meaningful and sociopolitically astute. It suggests a brief vision of utopia — one in which the culturally disparate Jewish sites from which each object originated might fruitfully combine — then undermines that vision just as readily. Those objects, no matter how nearly juxtaposed, emerged from moments in history too separate to be easily brought together. That the attempt to do so might be inequitable or unjust seems virtually assured.

Yet even that resonant trio makes one wish the museum might go further. I’m curious about what the impact might have been if Wiley’s portrait of Itzhak had been allowed to stand on its own, rather than flanked by its influences, because the painting offers a glimpse of what Jewish identity might look like if it was permitted to ferment purely in the imagination, rather than in the often bitter broth of history. I had the same response to two excerpts from “Orange is the New Black” included in the scene “Television and Beyond,” which shows a loop of selections from the museum’s National Jewish Archive of Broadcasting. In those clips, a character named Cindy Hayes converts to Judaism, meeting with a rabbi and then immersing herself in a lake, treating it as a mikveh under the guidance of a fellow Jewish inmate, Shelly Ginsberg.

Cindy’s happiness at her conversion is remarkable, a bright light. Seen underwater during her first immersion, she smiles as if looking at the single thing she loves best in the world. Looking up, she sees Ginsberg through the lake’s surface, smiling down with equal warmth. Cindy is black, and Ginsberg is white, but it hardly seems to matter. I have rarely been so moved by a representation of Jewishness. I have rarely seen the experience of Jewishness depicted as being one of unadulterated joy.

History is a necessary pain. Cindy converts to Judaism because she’s drawn to its insistence on moral complexity, not because it seems really fun. But there must be room, in life and in art, to imagine past the constraints we can’t control. I would like to see more of that daring in this exhibit as it changes, as it is intended to, over time. I think that might be truly radical.