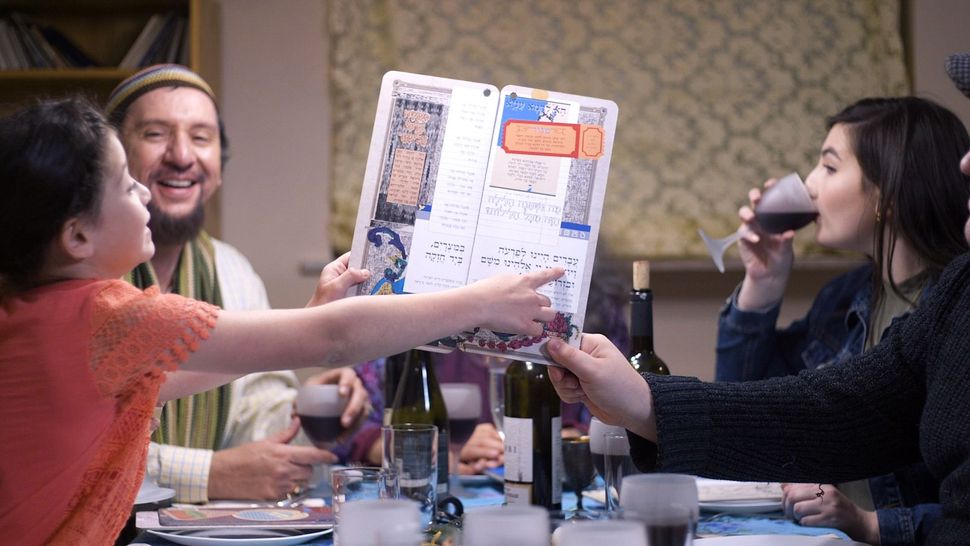 Over the last two decades, two trends have defined American religious life: disaffiliation and spiritual searching. More Americans than ever are leaving the religious denominations of their childhood: Protestant, Catholic, and Jewish communities alike. Each tradition, in turn, is becoming smaller, more traditional, and more conservative (except Catholics, due to the influx of Latinos).

And at the same time, record numbers of Americans identify as “spiritual but not religious.” We haven’t given up on the roots of religion — just on the notion that the tree has to look a certain way.

Enter the Passover Seder, which remains the second-most widely observed Jewish ritual (second to the Yom Kippur fast, but ahead of attending Yom Kippur services) and the most decentralized. Whether it’s a rote recitation of the Scroll of Maxwell House, an interactive ritual of participatory performance, or just a quickie before we get to the gefilte fish, American Jews have continued to roll their own Seders, even as they’ve left their synagogues and movements behind.

This year’s batch of new Haggadot — the tenth I’ve reviewed for this publication! — reflects America in a number of specific ways as well.

Of all the new haggadot of the year, Kerry Olitzky’s “Welcome to the Seder,” is the most representative of the trend in American haggadot to simplify, adapt, and demystify the Seder liturgy. The emphasis here is on inclusion. Of all the haggadot I’ve reviewed, “Welcome to the Seder” is the easiest to use. Someone give an award to the design team (Ann Koffsky and Zahava Bogner) who have succeeded in making the flow of the evening clear, unlike far-fancier haggadot — like the bete noire of my Haggadah-reviewing life, the hopelessly and incomprehensibly over-designed “New American Haggadah.”

Second, “Welcome” reflects the American reality that most non-Orthodox seders will have non-Jews, Jews by choice, and/or non-affiliated Jews at them. The text is short and sweet. The values are pluralistic (the washing ritual is analogized to Christian baptism; there are quotes from Marianne Williamson). And the emphasis is on the social justice aspect of the Feast of Freedom.

Occasionally, the SJW-PC bit gets a little much. Does the “wicked” son really have to say “I have chosen my own course in life, distant from what others had hoped for me. Accept me as I am, even if you don’t always like the decisions I have made”? I don’t know. But better too much than too little, when it comes to making the Seder welcoming to all.

This year, I even learned something new: namely, the Reconstructionist (or is it Reconstructing?) innovation of adding a pineapple to the Seder plate to remember the plight of immigrants and refugees, especially in our nauseatingly nativist political moment. I’m not sure my alt-Seder-plate can hold any more produce, what with the beets and olives and oranges already, but it’s still a great idea.

But for every concerned liberal in America, there’s also an outraged radical. So if “Welcome to the Seder” isn’t militant enough for you, consider Alan Wagman’s scrappy “Holy Haggadah,” set mostly to verse (and mostly to the rhythm and tune of Holly Taya Shere’s famous “Holy, Holy” chant), and featuring feminine God(dess) language and biting political lines like Wagman’s rewrite of the Gettysburg address:

Twelve score and counting years ago, Our fathers brought forth On this continent A new slave state, Conceived in servitude and Betrayal of the proposition That all men are created equal.

Bet that’ll wake up your millennial college student after three cups of wine!

Of course, “Holy Haggadah” isn’t for everyone. If you can’t stomach the massacre at Lydda being remembered at your Seder, then move along. But if you’re looking for a woke, rhyming Haggadah with lines like “Muslims, women, immigrants, LGBTQ; When they come for a minority, they come for me and you,” get in touch with Alan.

In addition to disaffiliation and political activism, the Jewish 21st century has also seen a renaissance of Jewish creativity, again mostly away from the mainstream institutional world. That’s reflected in a handful of new and newish haggadot this year.

First, the artist Eli Kaplan-Wildmann has produced an astonishingly beautiful… thing… called “Unbound: The Recreated Haggadah,” a craft-produced, small-batch set of twelve cards, each lavishly decorated, that together contain the entire traditional text of the Haggadah. Unbound is not meant to be a user-friendly introduction to the Seder. Though it comes with a set of guided questions and activities keyed to the art on each card, it’s best for “advanced practitioners” who will appreciate its many subtle themes and beautiful execution.

Second, and in a very different key, is the hilarious humor-Haggadah “For This We Left Egypt?” co-written by Dave Barry (no, not Jewish, but friends with a lot of Jews), Adam Mansbach (of “Go the F—k to Sleep” fame), and Alan Zweibel. (“For This” was published last year, but too late to be included in the roundup I wrote last year.)

I’m not sure if you could really run a Seder with this thing, but I laughed out loud many, many times while reading it. “For This” has what it thinks is the traditional Hebrew text of the Haggadah, but notes that “for all we know it’s a Hebrew repair manual for a 1973 Westinghouse dishwasher.” Helpfully, it notes, “You’ll also find discussion questions and activities sprinkled throughout the book. These will make the Seder last longer, so you should ignore them.” And it offers incisive commentary on the Exodus narrative, such as “slavery totally sucked.”

You get the picture.

And then there’s the lo-fi, kickstarter-funded “The Zombie Haggadah” – or, as it spells it at one point, “Aaaahggadah.” As with “For This,” I think the best use of “Zombie” is to sneak it in with you if you’re stuck at a Maxwell House type Seder. As your relatives recite the Wherefores and Exalteds of their habitual liturgy, you can suppress bursts of laughter at lines like “These are the brains of affliction that we ate in the land of Egypt.” What I liked most about “Zombie” is how knowledgeable it is, filled with excessively long commentaries and narratives, and with insider-baseball parody instructions like “Move the tray of brains to the side along with the second cranium filled with cerebrospinal fluid. Although you will be tempted, do not eat the brains or drink the cerebrospinal fluid… yet.” These guys know their Haggadah.

There’s more. Last year’s “Harry Potter Haggadah,” for example. McSweeney’s parodic “Kushner Family Haggadah” (“To those who are hungry and in need, we offer our prayers and hope, which is enough — Dayenu!”) And several new traditional Haggadot, such as Artscroll’s clear, handy “Illustrated Haggadah.”

You know, progressives could learn a lot from Artscroll. The traditionalism isn’t for me, and some of the illustrations are tacky. But it’s easy to use, helpful for religious families with children, and at an $8 price point, it’s affordable and usable. How come the ultra-Orthodox do such a better job of subsidizing Jewish culture than the non-Orthodox?

That’s all for 2018. See you next year — unless the redemption comes first, as the Zombie Haggadah prays: “Next year, we will be free zombies feasting on the brains of the Leviathan.” Have a meaningful Sedaaaaarrrh!