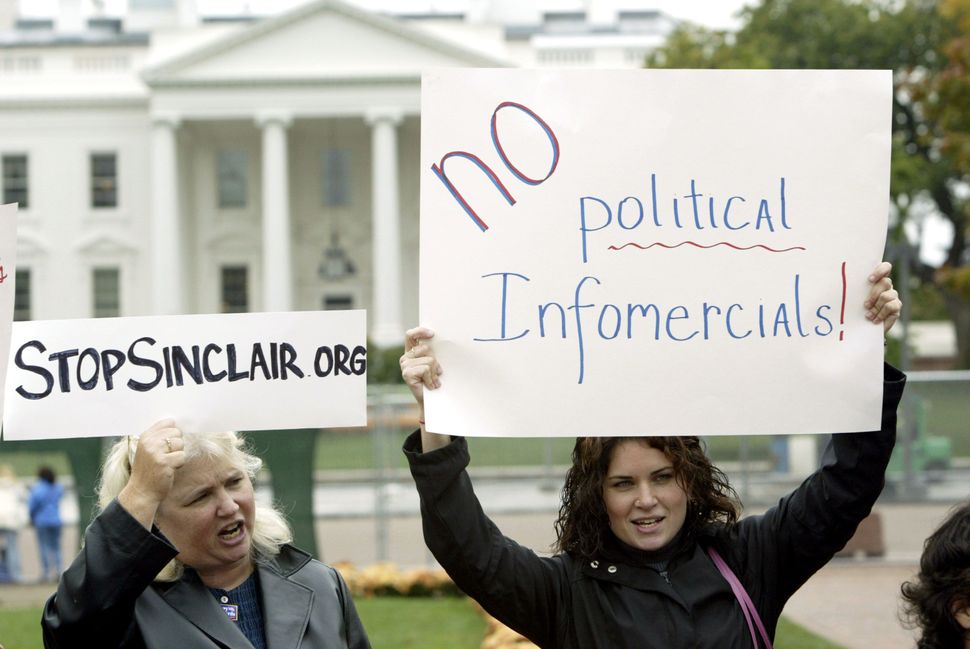 I don’t know if Timothy Burke is going to save journalism, let alone democracy, but the spooky video he made for Deadspin at the end of March racked up 30 million views within a week and got the country gasping at Sinclair Broadcast Group’s fake anti-fake-news campaign.

Burke, though, will need to pit what he calls his “weird dumb shit” against $5 billion of advertising revenue to stand a fighting chance of saving the American media from itself.

If you haven’t seen the video, have a look. It’s a mashup of anchors from Sinclair stations around the country forced by their corporate overlords to read a script that Russian trolls, or Orwell, might have written:

“Hi, I’m (A) ______, and I’m (B) _____…. Unfortunately, some members of the media use their platforms to push their own personal bias and agenda to control ‘exactly what people think’…. This is extremely dangerous to a democracy.”

Burke’s viral video threw attention on Sinclair’s buyout of Tribune Media, now pending at the FCC. With its 173 stations, already the nation’s biggest chain, Sinclair’s $4 billion play for dozens of Tribune stations would extend its reach to 72% of TV households.

It’s our decision. Should we really entrust them with that power?

But even if Sinclair weren’t committing what Philly Inquirer columnist Will Bunch calls “apocalyptic zombie journalism,” even if it owned 50 stations instead of 200, the role that local TV news could play in hastening democracy’s twilight would still be worth freaking out about.

You may not watch local TV news much, or at all. But 25 million Americans do watch it nightly, which is 10 times more primetime viewers than Fox News gets, 13 times more than MSNBC and nearly 25 times more than CNN. At the same time, 85% of Americans say they trust the information they get from local news outlets “some” or “a lot”; only 35% say that about social media like Facebook and Twitter.

What’s on local news? Its business model — advertising — drives everything else. In the 1970s, when broadcast networks discovered that news could be a profit center like their entertainment divisions, an industry of local TV consultants sprang up. Their message to news directors and general managers: Politics is ratings poison. Stations listened. By 1998, when my USC colleague Matt Hale and I measured how much coverage California stations gave to that year’s gubernatorial race, the answer was less than one-half of 1% of their news time — hardly enough to clear your throat. News may be a profit center, but news about policy? Not so much.

In the years that followed, we studied stations all over the country. Here’s one grim finding: In a typical half-hour of LA local news, coverage of city and county government — stories like education, transportation, health care, immigration, law enforcement, the budget, new ordinances and voting procedures — all together amounted to 22 seconds. On the other hand, crime stories took up almost 3 minutes, and almost invariably at the top of the broadcast. So crime 10%, local politics 1%. “If it bleeds, it leads” is an iron law of ratings, and not just in LA.

The picture of our world that local TV news paints has mean streets. People are victims, not citizens. Deliberation bores them; conflict rocks, That the filter bubble inhabited by 25 million Americans. When politics penetrate, it’s as poli-tainment — a reality soap delivering eyeballs to advertisers. That’s how Sinclair’s home office reframes politics: Self-government as outrage theater.

The advertisers who fund the stations sell more than soap. When we bitch about big money corrupting politics, we usually mean candidates selling their souls to contributors. We should bitch even more about why candidates need that money: to pay for media. During the 2016 campaign cycle, campaigns, PACs, special interests, independent committees and (thanks, Citizens United) undisclosed donors spent close to $10 billion on political advertising. Nearly half of that went to TV stations’ bottom lines.

Because those airwaves, like the air, are public goods, owned by we the people, station owners need licenses to broadcast over them. The FCC — our FCC, in principle — grants those licenses for 8 years, for free. In exchange, stations promise to serve the public interest. Eight years later, here’s how a station renews its license: It sends a postcard to the FCC. What must a station do to prove it’s kept its end of the public interest contract? Nada. It could run only crime news, or only Sarah Huckabee Sanders or no news at all. Since the Communications Act was passed in 1934, the FCC has revoked only a handful of licenses. A station license is basically a license to print money.

Political scientists call people whose news sources are light on substance “low information voters,” but really, “voters” is wishful thinking. They may not learn much from TV news, but they do see plenty negative stuff that disgusts them. More campaign ads are nasty than not. The effect negative campaigning has, beyond making us want to take a shower? It polarizes. Worse, it suppresses turnout.

It doesn’t have to be that way. In 2000, Walter Cronkite got behind an effort to give candidates free airtime, the way other democracies do, and he lent his name to a biennial prize, the Walter Cronkite Award for Excellence in Television Political Journalism given by USC. Sixty-six local news stations and reporters have won since then. Despite the discouraging things I’ve said, I also know that there’s impressive, even inspiring work being done in markets of all sizes. I direct the Annenberg School’s Norman Lear Center, which administers the award, so I get to watch the stations’ best efforts. The entries always make me hopeful about the good that responsible journalism can do.

There’s an award category for political coverage across a whole station group. Hearst Television, with 32 stations, has won it nine times in a row. What Sinclair gets wrong, Hearst gets right. They both tell stations what they want. Sinclair makes them carry Trump-bot Boris Epshteyn’s commentary. Hearst asked their stations to run what turned out to be 375 hours of coverage holding officials accountable to the public, and they covered races TV news usually ignore, like sheriff, school committee and state legislatures.

If you want a taste of Hearst’s work, here’s Candy Altman, the chain’s vice president, news, accepting the 2017 Cronkite award (from me!) at the National Press Club in Washington. (Here’s Hearst’s whole entry.) Scripps’ 33-station group also won that category last year; if you watch past Altman, you’ll see Scripps chairman and CEO Rich Boehne accept, and a bit of their entry.

“I talk to a lot of young people who want to enter our profession, and I tell them that now more than ever, we need people who are committed to finding and telling the truth,” said Altman, who’s stepping down in June after 35 years with Hearst, at the Press Club. She ended with this kicker: “Trusted local sources matter, and must remain strong for our democracy to flourish.” Those words won’t get cut into a “weird dumb shit” video: there’s nothing spooky or ironic about them. But I can easily imagine them getting chiseled into marble.