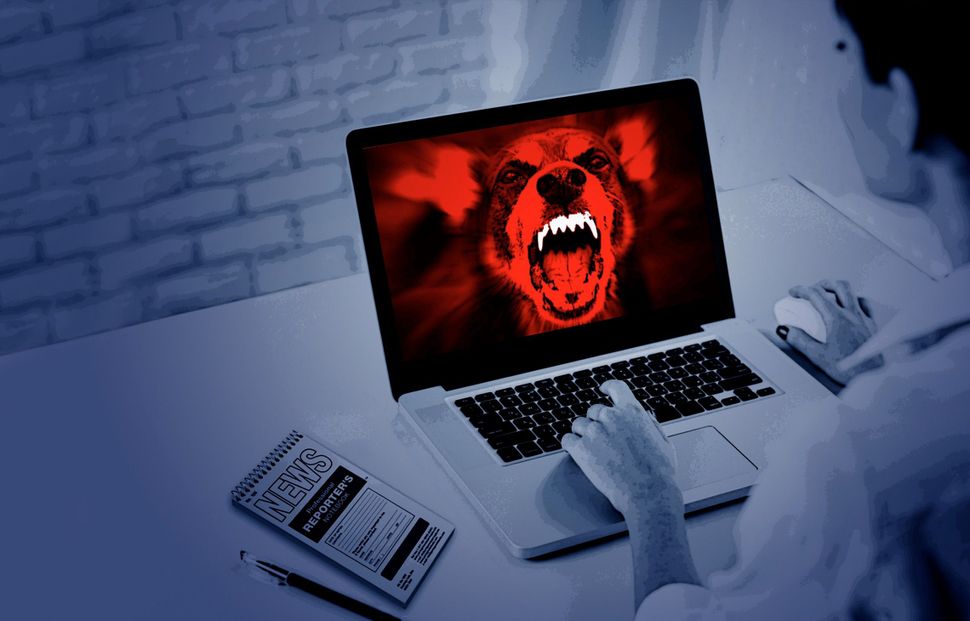 When the anti-Semitic emails and nasty messages on social media bombarded Jewish journalists last year, those of us receiving this online harassment knew that it was an outgrowth of the contentious presidential campaign, especially from supporters of Donald Trump.

As the attacks eased in the past few months, I exhaled a bit. Maybe the worst was over. Maybe those awful trolls went back into their corners, realizing that they weren’t going to stop us from doing our jobs.

Then I heard other stories. An African-American columnist faced threats and intimidation after he wrote provocatively about race and the law. A white reporter was the target of a campaign to ruin her reputation, from a businessman who didn’t like what she wrote.

The safety and security of American journalists are being tested in new and horrifying ways, enabled by technology, and given social permission by a president who calls us “enemies of the people” and denigrates our work to “fake news” while leading a nation that cannot agree on the core pillars of democratic discourse.

This isn’t just a Jewish problem or a journalism problem. It’s a democratic problem. This is not just for newsrooms to address; it’s for America to confront.

That message was reinforced after I participated in a recent discussion hosted by the Committee To Protect Journalists, the first time the advocacy group has convened a meeting focused on threats to American media. We know how dangerous it can be to do independent reporting in Mexico, Yemen, Russia, Egypt, Iraq, Afghanistan and Syria. Unfortunately, the list can go on and on, as 28 journalists have been killed so far in 2017 worldwide, and the year isn’t even half over.

There is no equating the assault on journalists in those countries to what is happening in America now. The protections guaranteed in our constitution, affirmed by centuries of law and practice, place us in a far different category, and while our democracy is shaky, it is not broken from within. I’d much rather pursue my craft here than anywhere else.

Cyber abuse is a gathering cloud. American journalists faced danger in the past — like courageous Southern editors decrying segregation — knew who their enemies were. Online, you have no idea.

Given the topic’s sensitive nature, the CPJ gathering followed the Chatham House Rule, meaning that participants can summarize the conversation without using names. Afterward, I did get permission from Elie Mystal, a Harvard-trained lawyer who writes for the Above the Law blog, to share his story. He had become used to dismissing abusive messages, because, as he said, “crazy dudes are part of our business.”

But after the election, one of his columns — and it’s a provocative one — was picked up by a Breitbart writer who twisted Mystal’s argument into an incitement for murder. “I started getting threats through every communication I had — social media, email, text. ‘I’m going to lynch you.’ Images of ropes and nooses. As a person who deals with criticism all the time, it was different in kind,” he said.

Having seen someone taking photos of his license plate, he now parks in random places near the office.

It’s had a chilling effect. “I don’t have the luxury of writing without intentionality,” he said.

The abuse comes from other sources as well. Dune Lawrence, a reporter at Bloomberg News, allowed me to cite her story. A businessman she covered who has dealings in China created a damaging profile of her online that was filled with lies, racist accusations and sexual innuendo. Her best recourse was to write a story about the abuse, which was published last year. At least this allowed her to reclaim her reputation.

Hearing these stories made me grateful that the Jewish community has an infrastructure to deal with anti-Semitic harassment. The Anti-Defamation League issued a report last year documenting online harassment of Jewish journalists. The Jewish Community Relations Council and other groups hel p organizations secure the safety of their staff.

In my experience, though, these sorts of attacks and threats at their core are rarely about content. They are about identity, displaying a gross, even willful misunderstanding of the media’s part in the intricate system of civic institutions that hold leaders accountable, ensuring that uncomfortable stories are told, multiple voices are heard and democracy sustains itself.

Fundamentally, we must restore trust in those institutions, the media included, and build back the collective respect for, as the great Carl Bernstein says, “the best obtainable version of the truth.”

It’s no time to exhale.