Roseanne Greets Muslim Neighbors With Islamophobia — Until This Happens 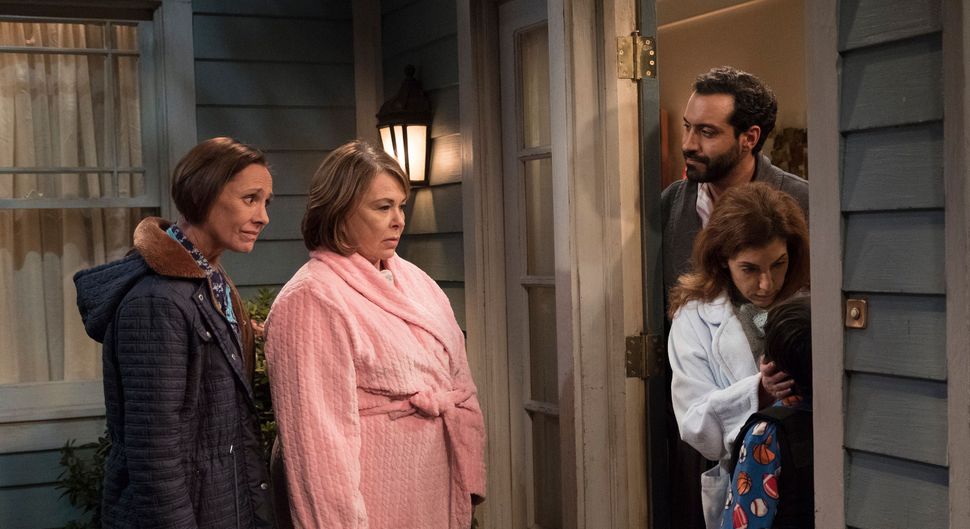 Roseanne: The Conners can’t pay their Wi-Fi bill, so they befriend their new neighbors to use the internet for Mary to Skype with mom Geena, who is stationed in Afghanistan. Image by ABC/Adam Rose

In this week’s episode, Roseanne hates on the Muslims. Spoiler alert: By the end, Roseanne gets woke. But how many racist jokes can the season’s highest-rated scripted TV series make without itself being racist?

I wonder how I’d feel if Roseanne Conner (played by Jewish actress and comedian Roseanne Barr) made the kind of cracks about Jews or gays that she makes about Muslims on this week’s episode of “Roseanne.”

The Conners have new Muslim neighbors, the Al Harazis — Islamophobic hilarity ensues. Roseanne suspects they’re stockpiling fertilizer and thinks they’re using it to build bombs. “What if this is a sleeper cell full of terrorists,” she asks her sister, “getting ready to blow up our neighborhood?”

Too broke to pay her Internet bill, but determined to help her granddaughter Skype with her mom who’s stationed in Afghanistan, Roseanne tries to log onto the Al Harazis’ Wi-Fi. Her first guess at their password: DeathtoAmerica. Desperate to help the little girl make a 2 a.m. Skype date, Roseanne goes next door to ask her neighbors to borrow their password; she arms herself with a baseball bat.

Every beat of that story is accompanied by laughter from the live studio audience it was recorded in front of — and also, I freely admit, by laughs from me. Does that mean we’re racists?

I think of myself as respectful and welcoming of diversity. I cheered when George W. Bush said “Islam is peace” just days after the events of September 11, 2001. I reviled Donald Trump’s oft-debunked lie that “thousands and thousands” of Muslims in New Jersey, “where you have large Arab populations,” cheered the fall of the Twin Towers.

On the series and in real life, Roseanne is a Trump voter. I am not. But Roseanne’s second try at the Al Harazis’ password, DeathtoAmerica123, cracked me up. Would I have laughed just as hard at an “alt-Roseanne” who guessed that her Jewish neighbors’ password was KilltheGoyim123? Or who suspected that her gay neighbors were buying beer for minors in exchange for hand jobs?

I’m writing this before the episode airs, so I don’t know whether some voices will condemn it as Islamophobic. But I do know that at least two Muslim scholars who’ve seen it don’t believe it is.

Full disclosure: “Roseanne” producer Tom Werner is my friend — we were college roommates — and the series is broadcast by ABC, owned by Disney, where I worked for a dozen years. While the episode was in post-production, Tom wanted to anticipate and understand what Muslim reaction might be, so I connected him with Amir Hussain, professor of theological studies at Loyola Marymount University in Los Angeles, and Sohad Murrar, a doctoral candidate in psychology at the University of Wisconsin-Madison.

They both think the episode is pretty terrific. (You can read what they told him here). Why? Roseanne ultimately recognizes and defends her neighbors’ humanity. But she can’t go on that character journey unless she starts with a fault she needs to fix.

At the episode’s pivotal scene, on the Al Harazis’ front porch, Salim tells his wife Fatima, “You see? They hate us.” “We don’t hate you,” Roseanne says. “We’re scared of you.”

It’s no accident that the -phobia at the end of Islamophobia and xenophobia doesn’t mean hate; it means fear. The distinction is crucial: Hatred is difficult to counter; Fear — especially of the unknown — can be addressed.

By the end of the episode, Roseanne is calling out the racism of a young cashier who’s disrespectful to Fatima at the ShopMore: “You are ignorant. That woman is twice the person you’ll ever be.” “We may have fears and prejudices,” Hussain writes, “but when you actually meet people, they may be decent. And that transforms you in the process.” Or as Murrar put it “It is difficult to dehumanize and stereotype other people when we get to know them on a personal level.”

It was almost 50 years ago that an American TV series first put a bigoted character at its heart. Archie Bunker, the patriarch of Norman Lear’s pioneering “All in the Family,” casually let fly the kind of talk — “spic,” “dago,” “heeb,” “Polack,” “fag” — that viewers knew from their living rooms, but not from their living room screens. (Adulation disclosure: I hold the Norman Lear chair at USC’s Annenberg School.) For making Carroll O’Connor’s Archie lovable, Norman was accused of normalizing bigotry and validating the racism lurking in his audience. But Archie had plenty of foils to contest his pronouncements, like his son-in-law, Rob Reiner’s Meathead (a role played on “Roseanne” by her sister, Laurie Metcalf’s Jackie). Plus people, including Archie, aren’t unidimensional. Norman modeled Archie on his dangerously charming father, Herman “H.K.” Lear. “I could never forgive him for being a bigot,” he has said. “But I found there were other things to love him for.”

Every American family torn by their feelings about Trump, or about anything else, knows how hard it is to reconcile their love for each other with their hate of each other’s hates. “Roseanne” is first and foremost about a family. But even though Trump’s name has come up in the series only once since the pilot, there’s been enough loopy off-screen chatter from Trump and Barr to blur the line between the scripted series ABC is airing and the political sideshow that has de facto been marketing it.

But how will this actual episode affect the Muslims in the audience, or that segment who believe Muslims are bent on blowing up their neighbors?

“If there’s any negative feedback,” Prof. Hussain wrote about the episode, “I suspect it won’t be from Muslims, but from right-wing extremists who think Roseanne has gone soft. She hasn’t of course, she’s just come to realize that the Muslim refugees next door aren’t terrorists, but neighbors.” He may be right about a sliver of the audience. And maybe another sliver will have some new racist jokes to tell, the way Archie Bunker’s jibes were suspected (mistakenly, in my view) of giving an all-clear to ethnic slurs.

But what I hope will happen is that some of the many “Roseanne” viewers who don’t know any Muslims, and who also, like Roseanne, fear them, will feel that they’ve met them by proxy in “Go Cubs!” and will travel her transformative journey. Oh, yeah — Spoiler Alert! — that’s the name of the Muslim episode. “Go Cubs!” is the Al Harazis’ Wi-Fi password. They’re big baseball fans. What could be more American than that?

Roseanne Greets Muslim Neighbors With Islamophobia — Until This Happens