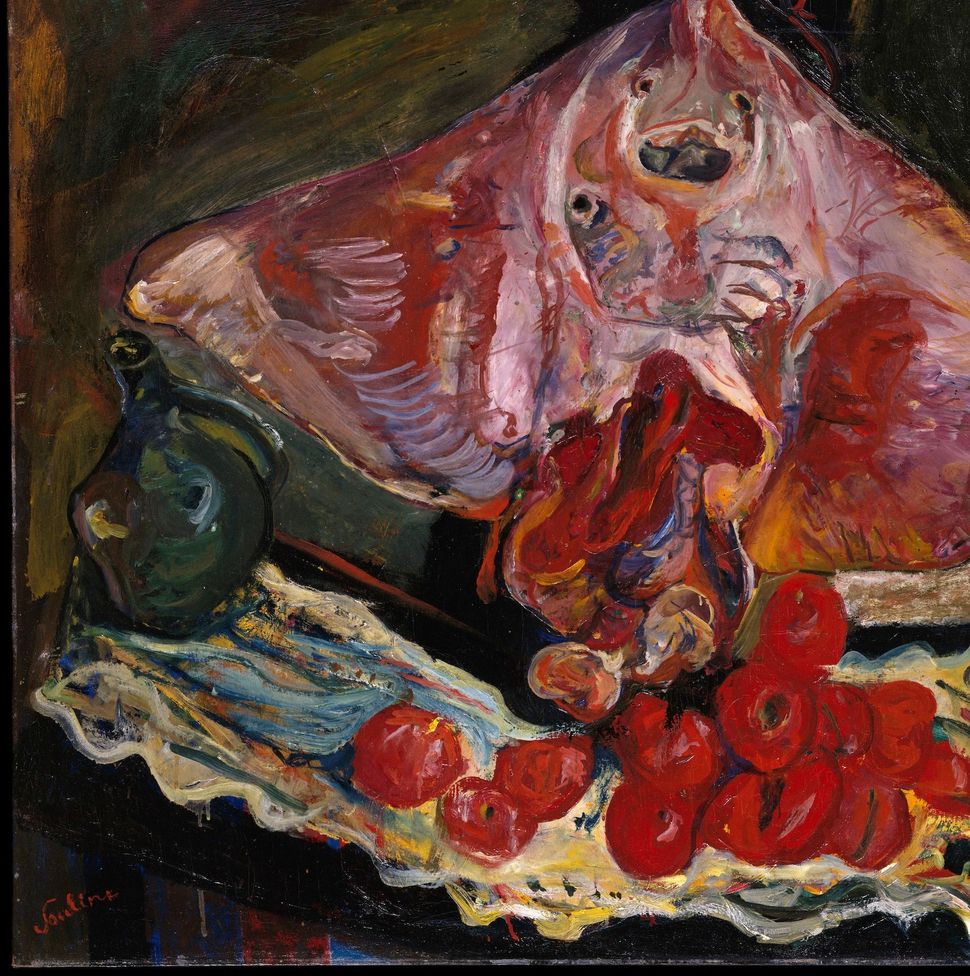 “Still Live with Rayfish” (1924) by Chaim Soutine. Image by Courtesy of the Metropolitan Museum of Art

There is a well-known send-up, in the movie “Notting Hill,” of self-righteous dietary fads. “I’m a fruitarian,” a mousy young woman announces on a first date with Hugh Grant. “We believe that fruits and vegetables have feelings,” she says; with a sniff, she confirms that the carrots at dinner were murdered.

Anyone who has laughed off her statement as ludicrous might reconsider upon seeing the Jewish Museum’s new exhibit “Chaim Soutine: Flesh.” Soutine, a tormented Lithuanian Jewish expressionist who found an artistic home, if not peace of mind, in Paris just before World War I, had a strikingly macabre imagination. That imagination was famously preoccupied with dead animals and specifically raw meat, a fascination that is, unsurprisingly, the subject of “Flesh.” But Soutine’s interest in the soon-to-be-consumed also extended to the odd vegetable; see “Still Life with Artichoke” (1916), in which both the titular vegetable and the fork suggesting its imminent doom appear to vibrate with living vigor. 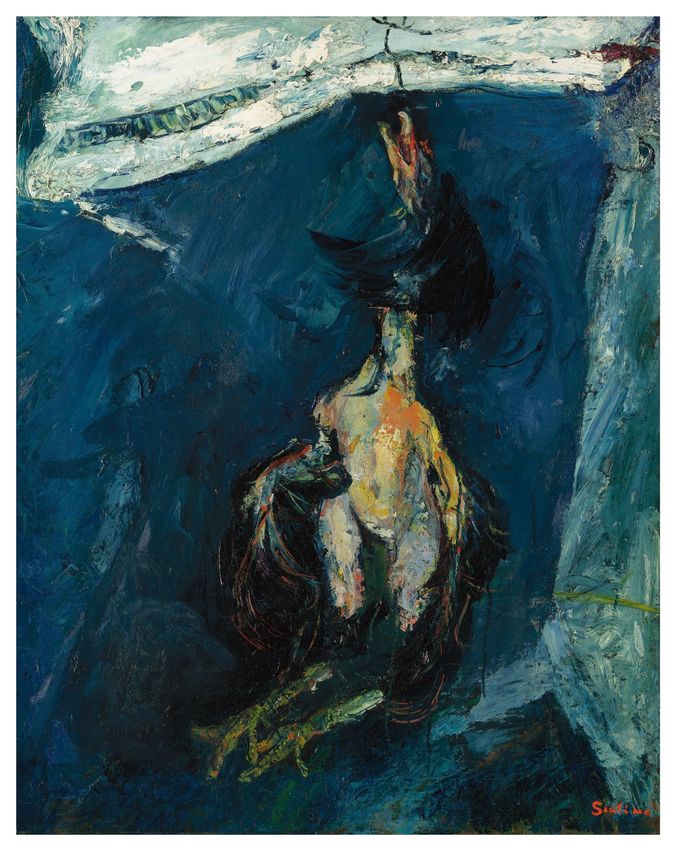 It’s a grim joke, as is each of Soutine’s still lives, a genre that tends to focus on the inanimate and decorative. Soutine shows that genre’s apparently gentle premise to be, by nature, as brutal as any other in art. In “Still Life with Fish” (1921), for instance, a group of slender silver fish occupy a circular, light-colored dish, their bodies so taut as to trick the brain into thinking them in motion. But that dish itself occupies a dark background, suggesting the struggling fish have been caught, perhaps in a stomach, a reverse Jonah and the whale.

Is the crueler implication that they have been swallowed alive, or that, in death, they are unable to cast off the impression of life? In Soutine’s work the answer is obviously the latter. “Chaim Soutine: Flesh,” which consists of 31 canvases, is organized in four sections: “A Modern Still Life” — home of the artichoke and fish — “Fowl,” “Flesh” and “The Life of Beasts.” Each segment examines a facet of Soutine’s faunal obsession, and each, save the last, suggests a desperate curiosity about the violence of animal life. In “Fowl,” a series of strung-up birds gaze heavenwards, their expressions reminiscent of those usually worn by sacrificed saints. Soutine was reverent about little aside from art, but it’s unlikely that in adopting the cast of religious martyrdom for slaughtered chickens and turkeys, he intended to insult the church. The birds’ beauty is enrapturing; the artist’s message registers as one of hopeless empathy. All flesh goes this way, whether celebrated for doing so or not. 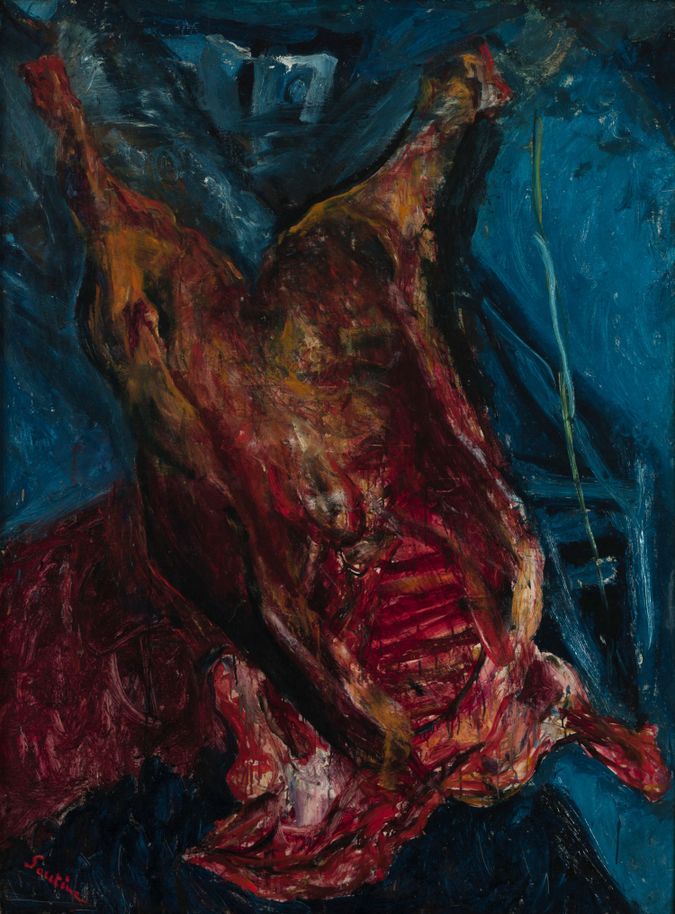 “Carcass of Beef” (1925) by Chaim Soutine. Image by Collection of Albright-Knox Art Gallery

Yet that message turned out to be too neat for Soutine. “They say Courbet could give in his nudes all the character of Paris,” reads a quote by Soutine on one of the exhibit’s walls. “I want to show all that is Paris in the carcass of an ox.” Soutine’s notorious disdain for personal hygiene made him a recognizable character in Montparnasse, the hotbed of Paris’s art scene when he arrived in 1913, but his active war on hygiene in the name of art became the subject of local legend. His paintings of sides of beef required his long exposure to his rotting subjects; he would hang the raw meat in his studio, and douse it in animal blood to refresh it as it became steadily more putrid. His neighbors complained of the smell, and once the police came to investigate it, only to be met by a stern talk from the artist on the unforgiving nature of his business.

One can hardly imagine a more effective way of making oneself unforgettable. Yet Soutine’s lurid methods, although they may have translated as persona-building, add meaning to this body of his art. He aimed to convey the impression of recent death; in doing so, he insisted on imposing that impression on flesh already decayed. He was illustrating the way in which death could reach for and resemble the guise of life. In painting death, he was painting antipathy to death. 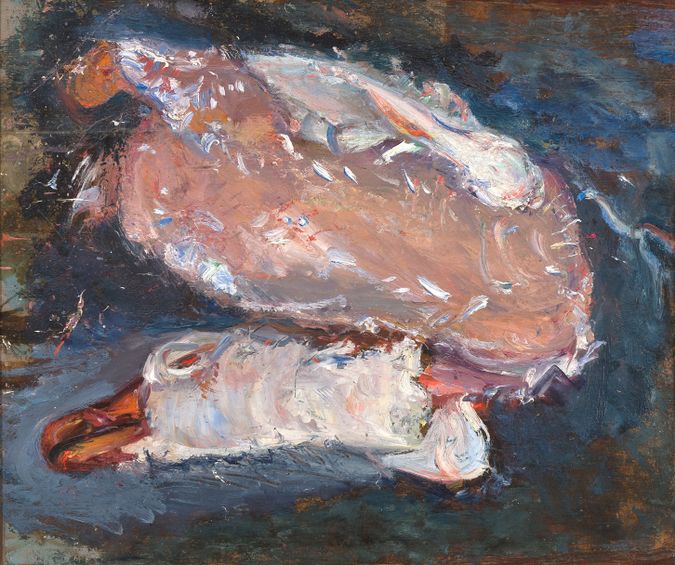 The exhibit’s last section, “The Life of Beasts,” is its most overtly emotional. In “Plucked Goose” (1933), the bird’s body is foreshortened; it looks to be the same size as its unplucked head and broken neck. Soutine’s grief over the dead fowl is palpable. Its half-closed eye looks exhausted, not lifeless, a childlike dream of ongoing life. Next to the goose, the subject of “The Donkey” (1934) is already a ghost, its living body transparent against the background. “The Fish” (1933) appears, convincingly and unironically, to shed a tear. There is only one painting in the entire exhibition in which an animal is not aesthetically linked to death: “The Duck Pond at Champigny,” which Soutine painted in 1943, the same year in which he died following unsuccessful surgery on a stomach ulcer. It is nearly impossible to spot the ducks, two uncharacteristically indistinct white blotches. Around the pond is lush and hectic vegetation.

It’s when life is seen up close that its end presses on the mind. The morning I saw “Flesh,” I was woken before my alarm by the scrabbling sound of a frantic animal trapped in the ceiling above my bed. In the exhibit, I stared at one of Soutine’s dead and gape-mouthed fish and parsed the levels of my early-morning disgust. I did not want the animal in my space; I did not want to think about the diseases borne in its fur, feces or breath. Mostly, though, I was anxious that it might die in the close space into which it had worked itself, and that I would be left with the rot.