Can Natalie Portman And Jonathan Safran Foer Save The World From Humans? 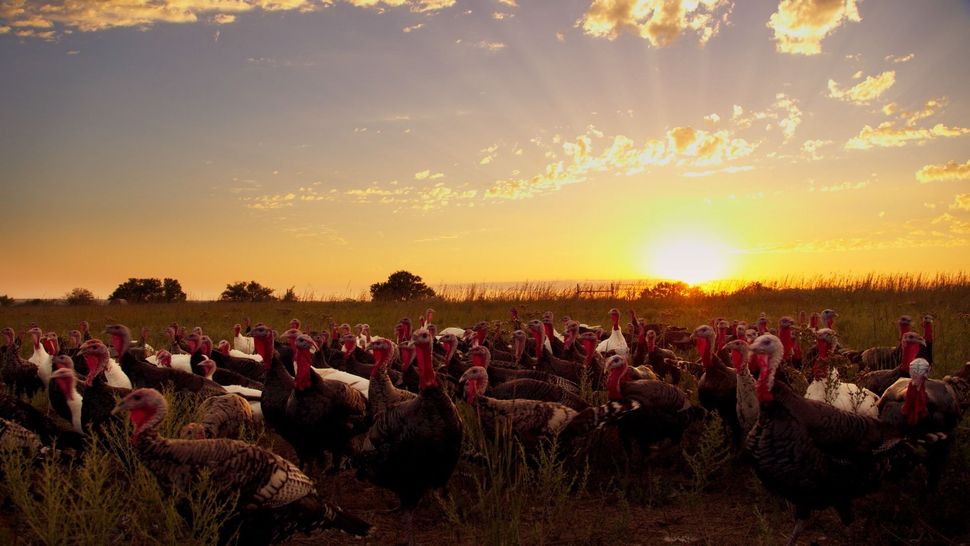 A still from the documentary “Eating Animals.” Image by IFC Films

It’s difficult to tell 98% of your audience that they are inhumanly cruel and then not lose them.

But that’s what producers Jonathan Safran Foer, Natalie Portman and Christopher Dillon Quinn hope to do with “Eating Animals.” It’s a new movie whose subject is the production and consumption of food from animals, loosely based on Foer’s 2009 book of the same title. Spoiler: Our current system is broken.

One way to win the audience over is to craft a marked aesthetic contrast between the beautiful and the harrowing parts of the movie and trust that people will come to agree with you. Another way is to entwine many types of stories and arguments to produce a cumulative rather than a bludgeoning effect.

“Eating Animals” does both yet, despite that, it still largely fails as a movie: in part because its scope is unfeasibly large and the movie’s aims cannot be achieved by a single piece of art.

At a minimum, the film focuses on the moral disgrace and the physical unsustainability of early 21st century “developed world” food production and consumption. Reasonably the film could be construed as targeting the forms of capitalist development over the last 50 years. And, probably, the film faults the explosion of population growth in the past 80 years and the mindlessly destructive systems that have buttressed humanity’s expansion.

As animals who eat (i.e. eating animals), it is we, not pigs, cows or turkeys, who are the real subject of this film.

So on one level it’s the “Inconvenient Truth” of food, bringing the truth of a central disaster to the masses — the potential cataclysms when the Earth has to support 8 billion people — some in luxury. But, not least because the real object of the film’s critique is so massive and systemic, the central point gets lost or diluted. That point is: What you eat matters. And it matters not because it has a piquant herbal tang, but because of its ethical and ecological cost.

Additionally, though the film is indeed gorgeous in the parts where animals are treated right and harrowing when they are treated brutally, that’s not enough.

Even the uncanny pink ponds of North Carolina that have killed all the fish and poisoned people nearby, feel strangely disconnected. Not just geographically distant from the vast majority of people in America, but politically absent.

Yes, the white male military vets who have been monitoring this despoiling of nature are compelling, even to Fox News viewers. These are not tree huggers. The members of the Waterkeeper Alliance started by wondering what had happened to their fishing and ended up worrying about their grandchildren’s health. They explain the “Pepto-Bismol” ponds are the result of mixing vast amounts of excrement from factory farmed pigs with chemicals to kill off the bacteria. Sometimes the runoff from these CAFOs (pronounced kay-foe) — concentrated animal feeding operations — renders local waterways toxic. At worse times manure is sprayed into the air to distribute it or the ponds are breached by extreme weather, leading to widespread contamination.

But what to do?

If these pugnacious vets can’t even save their granddaughters or win the right to film their own local polluters, after decades of struggle, what hope have we against the global industry?

Taken individually, the stories of the film are compelling. There’s the sustainable farmers — people who live the kids’ storybook idea of farmers that now comprise barely 1% of food output.

For example, Frank Reese is a turkey farmer who loves his turkeys and grows heritage fowl in a humane, sustainable way — did you know that most farmed chickens today can’t breed, in fact can barely live long enough to get killed for food? For most producers, Reese says, “the turkey is just a widget that has to get sent down the assembly line.”

During the filming of “Eating Animals,” he sends his hand-raised heritage turkeys down an assembly line (which he has to, to be federally certified). There they are carelessly “sprayed with fecal matter” and 40% of his small, high quality, precious flock is condemned — because that’s normal waste in commercial turkey slaughter.

Paul Willis is a “free range pig farmer” who, though he recently stopped raising his own pigs, still shows his granddaughter and other farmers at Niman Ranch how to raise pigs among other crops. A founder of Niman Ranch Pork Co., he notes that husbandry was standard for most farmers only a generation or two ago. It was a “way of life rather than going to a factory and producing protein units.” Now, unlike Niman Ranch, pigs (and cattle) are confined in ways that would appall consumers if they knew.

Both Willis and Reese need films of their own.

Likewise deserving of their own movies are the whistleblowers: veterinarian Dr. James Keen who saw so much animal abuse and cruel testing at the government’s U.S. Meat Animal Research Center (USMARC) in Nebraska that he felt like he was betraying his own Hippocratic oath but, in doing so, lost his job, his career and his marriage. Or, heartbreakingly, chicken farmer Craig Watts who put his young family into long-term debt to give them a reliable livelihood only to see his farm turn into a hellhole cog in the machine of Big Poultry.

By combining these narratives and more, the film misses the opportunity to become “An Inconvenient Truth” or even “Philadelphia” — a flagship introduction to a cause. Perhaps multiple stories means that the food activism Farm Forward organization (deeply involved with Foer’s original book and this movie) can call on a deeper bench of presenters. Maybe. But that doesn’t help the movie which though deeply right, is not compelling.

Most people today, and throughout history, know that animals die for our meat and have made our peace with that. But the cruelty that lies behind virtually all contemporary animal products — meat, milk, eggs — is something we haven’t faced. Most people today understand that climate change is an imminent threat, but while we recycle cardboard, drive hybrid and reuse bottles we don’t think about the vast contribution of animal waste to climate change (“somewhere between 14% and more than half of all climate change is due to animal farming”).

And, of course, if we scrap our current system which produces cheap food for more people than ever, how will we feed the world? As the film asks of where we’ve ended due to a series of unintended consequences, “how do we go somewhere else?”

One of fledgling Christianity’s major innovations was to scrap all significant food prohibitions. I’m not suggesting that there’s a straight line from St. Peter’s “vision of a sheet with animals” to factory farming and avian flu, but there’s a reason that the word “kosher” has spread from meaning “fit for Jewish dietary consumption” to meaning “ethically appropriate.”

It makes sense for Jews to be at the forefront of food ethics and, unlike the bizarre “correspondence and underwear” magazine piece last year in The New York Times, this movie is a totally laudable collaboration between Foer and Portman. Despite her celebrity, Portman’s voiceover is unobtrusive, though strong and measured. Along with director Quinn, they have provided a proof of principle, but they have a long way to go. As their allies in the food movement and the food industry know, there are a lot more movies and a lot more actions before meat is not murder and before the cruel treatment of livestock is not part of a system that feeds us while making our planet unlivable.

Can Natalie Portman And Jonathan Safran Foer Save The World From Humans?