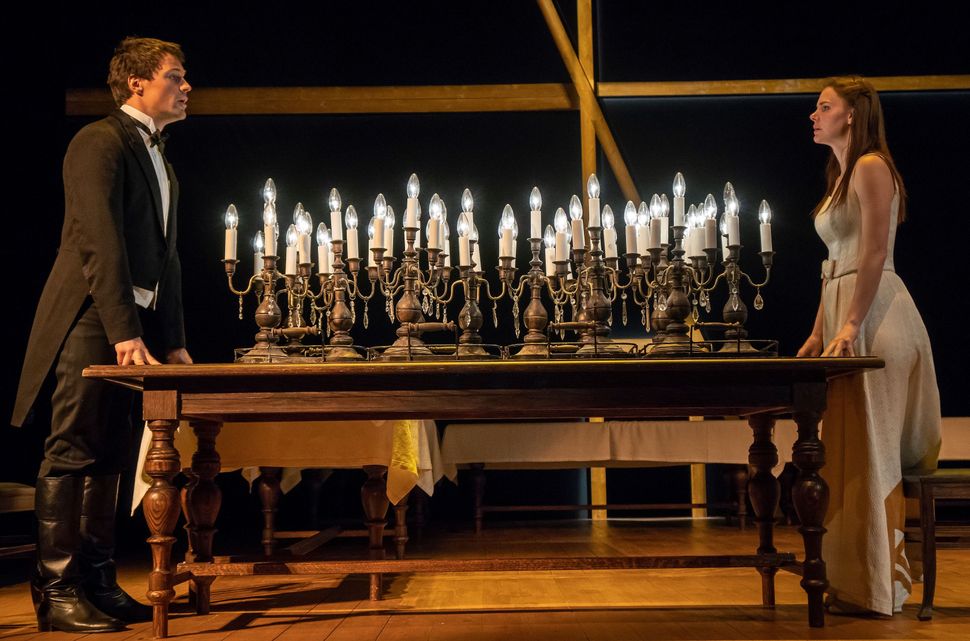 The Maly Drama Theatre’s “Love and Intrigue” at BAM. Image by Stephanie Berger

I have been thinking, recently, about the prevalence of female suicide in literature. It started when I saw Simon Stone’s update of Federico García Lorca’s play “Yerma,” in which the unnamed main character kills herself, driven mad by her inability to conceive a child. I was troubled by the choice; in the original “Yerma,” the anti-heroine kills her husband. And then I was struck by how often authors, especially male ones, have used women’s suicide to craft a shocking end to a plot or make a crude moral point. Even when that point is intended as outraged or progressive, it’s a form of objectification: A dead woman’s body, in literature, is rarely a subject of grief over that specific woman, for her sake alone.

Given that, the premise of “Love and Intrigue,” Friedrich Schiller’s 1784 play about a young couple doomed by class differences and the unrepentant politicking of their elders, made me anxious. I’d never encountered the play before seeing the Maly Drama Theatre of St. Petersburg’s current production at BAM, but when ill-fated young lovers are the subject, it can usually be assumed that their ill fate will include a dead woman’s body. 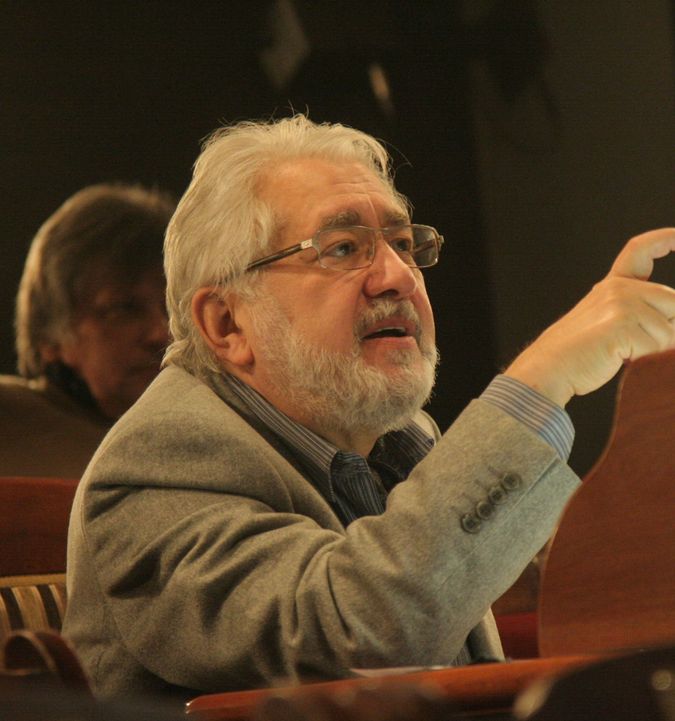 In “Love and Intrigue” that holds true. The woman in question, Louise, ponders taking her own life but is instead murdered by her jealous lover, Ferdinand, to whom she reveals her innocence as she dies. He kills himself in questionable repentance: “I’m a murderer, the son of a murderer,” he proclaims, downing a glass of the same poison that he earlier forced on Louise.

In the Maly production, these climactic deaths are marked by an opulence the bare-bones staging otherwise avoids. As Louise and Ferdinand circle one another, still infatuated but now at odds, a group of white-tuxedoed waitstaff, who have previously served as a menacing would-be security service, set the stage for a banquet. Tables are laid out with white cloths, candelabra, extremely depressing bouquets of pale, drooping tulips. Louise and Ferdinand join in, battling as they lay out a tablecloth. Their deaths, ugly but muted, are arranged to occur in state.

Those deaths are then tacitly sanctioned by the state that, er, poisoned their love — no one has accused “Love and Intrigue” of being particularly subtle — as Ferdinand’s father, the scheming president, is heard giving an emotionless speech celebrating the marriage of the ruling duke, an event that, in its incipience, started the whole drama. His voice betrays no sign of grief over the death of his son. Louise and Ferdinand, dead but somehow still listening, raise their heads in disbelief.

I do not think that “Love and Intrigue” is a particularly good play. It is morally blunt, a parable that appears to hardly need performing. Its message, megaphone-clear from the first scene on, never shifts or deepens: Power, it insists, is inherently and absolutely violent. A well-intentioned point, yes; also a fairly nuance-less declaration of an idea that many, in 2018, appear to already take as fact.

But I was interested by an idea that Lev Dodin, the much-heralded longtime director of the Maly Drama Theatre, expressed to me about the play, which the company has been performing in repertory since 2012. (Dodin was losing his voice; we spoke with the assistance of a translator.)

“I think the fact that [Ferdinand] actually kills himself, in a weird way, makes us hope that there would be a world where love would be possible,” Dodin said. “And of course, unfortunate is the world where the only point of redemption and point of hope is the suicide of a young man who’s just poisoned the woman he loves.”

The idea that it might be potentially redemptive for a young man tainted by the inhumane behavior of the milieu in which he’s been raised to kill himself is profoundly disturbing. But it’s also somewhat radical, especially in that it makes Ferdinand, rather than Louise, the more lurid object in the play’s moral gaze. Louise may be, as Dodin thinks, the only character uninfluenced by intrigue. (Per Dodin’s description, “intrigue” is better understood as an “absolute lack of humanity.”) Yet in his estimation, her determination to act according to the dictates of love is noble but useless

“I think today’s world is so full of intrigue that love is becoming nearly impossible,” Dodin said. “When I was much younger I thought that [‘Love and Intrigue’] was about love, love, love. I thought, this is a play that paraphrases ‘Romeo and Juliet’ quite neatly. But as time went by I realized that ‘Romeo and Juliet’ is a story about love being impeded by intrigue, but the story of Ferdinand and Louise is the story of ruthless intrigue being impeded by love. By a very fragile specter of love, by something infinitely weaker than intrigue.”

It is strange to consider a director whose understanding of his bleak chosen text’s sense of moral good is so different from that which the text naturally encourages; strange, too, as a critic, to attempt to ingest so stark a worldview. The critic’s work is to be both cold-eyed about and intensely dedicated to humanity. One must stand in favor of both a deep-piercing objectivity and a fundamental belief in the human capacity for beauty. Few devote their lives to art, whether creating or analyzing it, without having a persistent sort of hopefulness, however jaded, at their core. Surely there will come a phrase or image, we think — a gesture or high note or bravura stillness — that will briefly show the lofted, gleaming space beyond our everyday human cruelty.

For Schiller, theater served a distinct religious purpose. “The theater has the power to punish the thousand vices which justice must patiently tolerate; the thousand virtues which the latter must let pass without comment, on the stage are held up for general admiration,” he wrote in his formative essay “Theater Considered as A Moral Institution.” With that in mind, “Love and Intrigue” appears to be not so much the work of a cynic as a succinct and damning affirmation of what is often taken as religious truth. There is a lofted space, it suggests. It is only that the path by which one may reach it is choked by human flaw.

Why did I find a play of such moral scope so dull? The critic’s view of the lofted space is, I think, different from that of the ideologue. (Schiller, in his damning view of ideologues — “my concept would be that any ideology, any high ideal that becomes ruthless, isn’t worth the paper it’s written on,” said Dodin — unfortunately came to somewhat resemble his subjects.) It is not a final destination, but a place you visit when you are lucky. It may not have a moral value. You get there through an appreciation of depth and ideas and beauty, not merely by evading the infinite and brutal lure of power.

It is a privilege to be a critic, just as it is to be an artist. Dodin, working in an authoritarian state and an increasingly authoritarian-leaning world, has stripped the luxury from making and parsing art. He told me he first directed a scene from “Love and Intrigue” in 1964, while a theater student. He does not remember doing so, but, years later, ran across the note about the scene in his former teacher’s journals. The play has been embedded in his mind, and as realized after 50 years of latent stewing, he has shaped it so as to include no room in which to seek or enjoy a fleeting sense of goodness and grace. There is only the hungry certainty that any such sense, in a harshly-minded world, is self-deception.

I asked Dodin if he thought another kind of world might be possible. “I firmly believe that as long as we’re capable of being outraged by what is happening in our world, it means that in our hearts and our minds we carry the possibility of another better world,” he said. But uncertainty crept into his voice. “Maybe it’s just a possibility,” he said. “Maybe just a supposition.”