The Food Truth Is Too Inconvenient 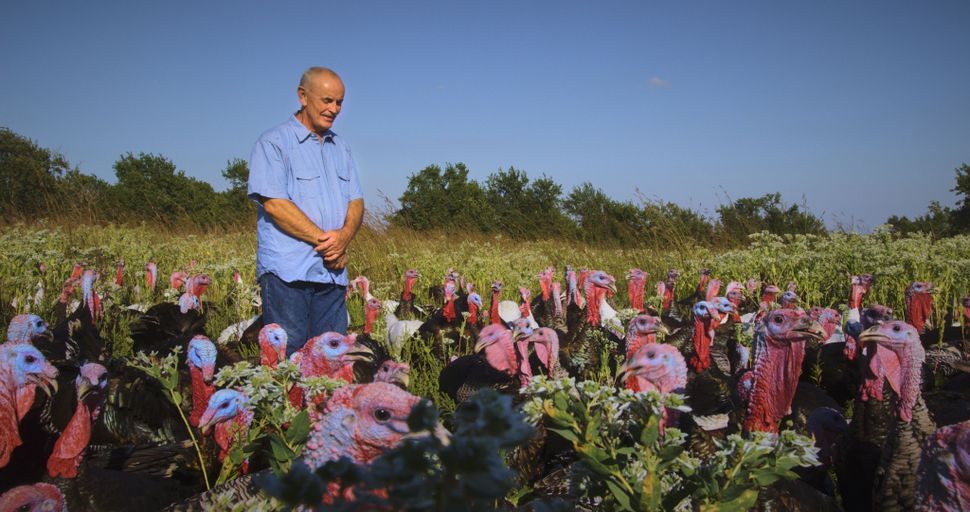 The Forward’s executive editor Dan Friedman is not convinced by Natalie Portman’s and Jonathan Safran Foer’s new film critiquing factory farming, “Eating Animals” — a film I and my team at Farm Forward contributed hundreds of hours over five years to help make possible. While acknowledging the importance of the topic, Friedman calls the film “unfeasibly large” and ultimately “not compelling.” Ouch! Yet, even as I wince, I find myself secretly smiling. Let me explain.

I believe that factory farming is one of the greatest evils of the contemporary world. More than 50 billion sentient beings live and die in a broken system that benefits only its corporate owners. The system is broken not only for the animals who suffer egregiously in it and for the millions of people who directly suffer from the pollution and economic devastation wrought by the factory farm. It is also a wrong that distorts the world we live in at other levels.

That is, factory farming is not only, for example, one of the single largest causes of climate change, but a force that shapes our political and social climate as well. This is the more unusual message of “Eating Animals,” both film and book. As Foer wrote in the book, “We are not merely animals that eat, but eating animals.” The system is not just broken for any particular species or community, but for all of us.

I’m tempted at this point to add a few sentences more about the nature of that broken system. What makes me stop from recounting any more of the ugliness is simple: you would almost certainly stop reading.

As Friedman so perceptively points out, that is the challenge faced by the film. To critique factory farming as “Eating Animals” attempts to do is “to tell 98% of your audience that they are,” at least some of the time, supporting a system that is “inhumanly cruel.” That is one hard sell.

Without ever saying it directly, the film hopes to evoke the same sentiment that Foer expressed in the book “Eating Animals” when he wrote:

Setting aside the direct material changes initiated by opting out of the factory farm system, the decision to eat with such deliberateness would itself be a force with enormous potential. What kind of world would we create if three times a day we activated our compassion and reason as we sat down to eat, if we had the moral imagination and the pragmatic will to change our most fundamental act of consumption?… the regular exercise of choosing kindness over cruelty would change us.

So, if you don’t decide to become a vegan, how many farmers are there — to take the chicken industry as an example — who operate outside of the factory farm system the way one of the film’s heroes, Frank Reese, does? It’s less than 5%. It’s less than 1%. In fact, as the film shows us, Reese is probably the only one breeding chickens for commercial sale outside the factory farm system in the entire United States.

Rather than putting forth the simple message that all one needs to do is buy more humane meat, and instead by focusing on the life of real farmers, the film shows that we need to reform animal agriculture to get a meaningful supply of meat outside the factory farm system in the first place (the film also points to plant-based “meats” as a part of the solution). This is what makes the film’s message especially challenging and, perhaps, too complex for a 90 minute film. Part of the message of the film is that some of the meat we buy thinking it’s part of the solution, is part of the problem.

The bad news that Reese delivers about chicken is that the “free range,” “organic,” “kosher” chicken you paid a premium for might or might not have been more humanely raised, but it is almost certain that it is a genetically modified “hybrid” whose fast-growing genetics predispose it to disease and suffering. If you spend the time to really learn about animal welfare certifications, you can identify the small amount of meat that really is better, but farmers like Frank who know what they have to breed and raise, look askance at most of what gets labeled as humanely raised.

Ultimately, Friedman’s critique of the film is that it tries to do the impossible. Speaking of the compelling story of individual farmers in the film, Friedman concludes that they each deserve “their own movies.” I tend to agree.

If you look at the strength of the factory farm industry today, it’s easy to feel overwhelmed. The scale of the violence and injustice — to animals, to vulnerable human populations, especially people of color, and to the environment that sustains all of us — is hard to comprehend. The scope of the problem is, as Friedman observes, “unfeasibly large.”

Yet, here is where religion — Judaism in my case (as, perhaps, in Portman’s and Foer’s) — comes in. The Torah tells of a tribe of enslaved Israelites, who break free from (at the time) one of the greatest earthly powers ever known, Mitzrayim (Egypt). Contemporary Jews, at least in theory, inherit this injunction to wrestle with the dominant powers of the world, to deal with impossibly large challenges.

Judaism, as well as much of what might be called religion, need not only be about what is “feasible.” Friedman argues that “it makes sense for Jews to be at the forefront of food ethics,” but he is thinking too narrowly of the longstanding Jewish engagement with the ethics of eating. Another reason — one that matters just as much to me — is that religious traditions can often help us better confront the “unfeasibly large” problems of the world.

“Eating Animals” takes on a problem too massive to fit in any one film, and, yes, it therefore fails in some respects. But if that failure leads more people to conclude, as Friedman does, that we need “a lot more movies and a lot more actions,” then that is the kind of failing that just might fulfill the film’s most audacious promise: to signal the beginning of the end of the factory farm. And such a change would, as Foer noted, surely change us in other ways. The end of the factory farm will also mark a new beginning. The film does not tell us what that new beginning must be, but it inspires us to ask.

Aaron S. Gross is the Founder and CEO of Farm Forward, an organization devoted entirely to ending factory farming and the organization executing the Jewish Initiative for Animals (JIFA).

The Food Truth Is Too Inconvenient