RBG Goes Classical For New Album Inspired By Her Life 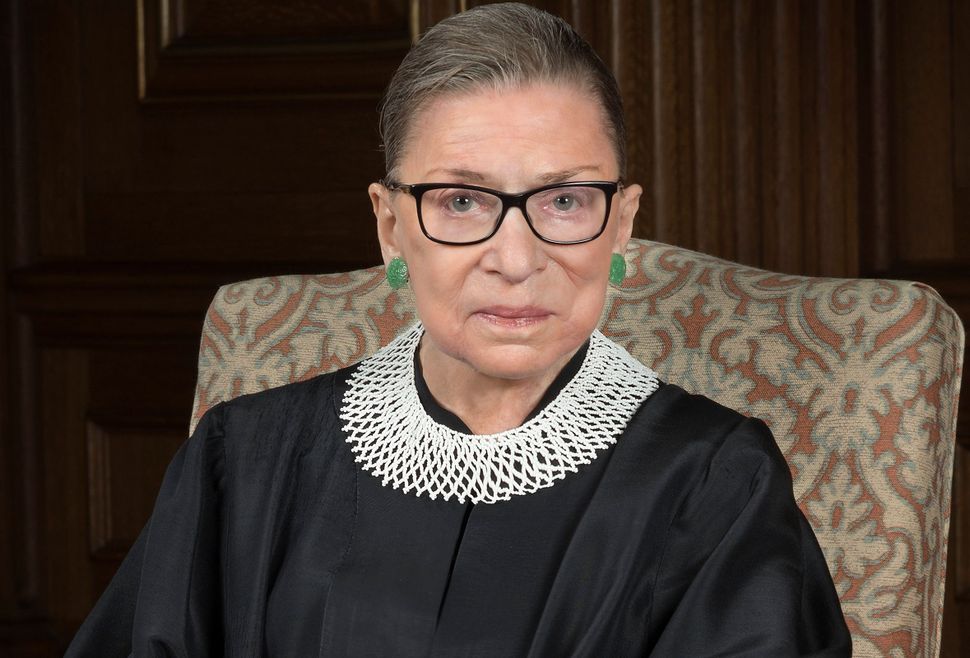 With Justice Anthony Kennedy’s retirement threatening to throw the Supreme Court’s balance off kilter, all eyes are on Ruth Bader Ginsburg, the famous dissenter and keeper of the progressive flame — but all ears? A new, nine-song cycle inspired by the liberal lion’s life is now available for those who can’t get enough RBG. While perhaps not as sexy as Lin Manuel Miranda’s “Hamilton,” the last musical work to feature debates on American jurisprudence, the album is, at least, a family affair.

Ginsburg’s son, James, whose label, Cedille Records, was profiled in the Forward, produced the nine-track release written and performed by his wife, the soprano Patrice Michaels accompanied by pianist Kaung-Hao Huang. The album “Notorious RBG In Song,” is a loving, but self-aware tribute to the 85-year-old Justice, blending testaments to her strength and judgment with digs at her sometimes prickly demeanor (“with a warm friendly snarl, she said ‘I don’t read tax cases.’”)

A devotee of the opera, and one-time performer, Justice Ginsburg might appreciate the arc of the piano-soprano record which follows her life from the early encouragement of her mother (“Celia: An Imagined Letter from 1949”), to her time as a law professor at Rutgers (“On Working Together”) to her ultimate ascent to the Supreme Court (“Dissenter of de Universe: Five Opinions and a Comment”).

The songs are reliably recitatif and amusing in the way they cram clumsy legalese into melodies (“I came upon a one-page brief, written by Charles Moritz, a pro se litigant.”) They’re fun to listen to and often, as in an aria lifted from a letter by Ginsburg’s late husband, Martin, moving.

Michaels’s written contribution to the album (collectively, the song cycle is called “The Long View”) is rounded out by the work of four other artists, which she also sings. These songs stand out as more tuneful than the arias in the cycle and include a jaunty rundown of RBG’s pot roast recipe by Vivian Fung and a torch song pulled from Derrick Wang’s opera “Scalia/Ginsburg.”

The album is a welcome addition to Ginsburg’s growing media catalogue, which numbers this May’s documentary, “RBG”; her published workout regime and an endless cascade of shirts, magnets and memes comically conflating her with the rapper Notorious B.I.G.

When asked by the Guardian about his mother’s unexpected cultural moment, James Ginsburg seemed to delight in it, saying, “I love this cottage industry that’s developed around her. I don’t want it to stop. I think if nothing else it’s helping people pay attention to what’s going on.”

By cementing her legacy (including many of her seminal opinions) in song, Michaels and Ginsburg are feeding a spirit of judicial integrity in a time when we need it most. It helps that you can hum it, too.

RBG Goes Classical For New Album Inspired By Her Life