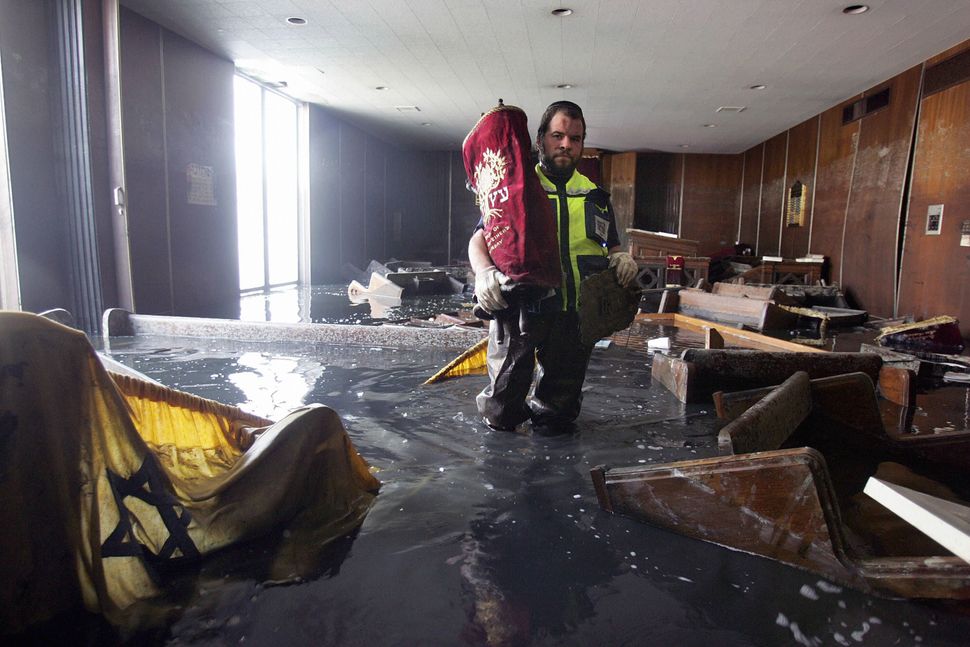 A rabbi removes a Torah from a flooded synagogue after Hurricane Katrina. Image by Getty Images

For whatever reason, I have attended only one funeral in my life, and it was for a Holocaust survivor. After liberation, Gilbert Metz made his way to Natchez, Mississippi, of all places, and soon to New Orleans and Tulane University, an education he paid for by window washing. He served with distinction in the Korean War, returned to Mississippi, started a family with his wife, Louise. His daughter, Helene, in time became a surrogate Southern auntie to me.

When I was growing up in Clinton, a suburb of Jackson, Mississippi, Gilbert was the one living Holocaust victim at our synagogue. The state’s sole survivor of both Auschwitz and Dachau, Gilbert lived out a Jewish American immigrant dream. A battered Torah, rescued from Europe during the war, rests inside a glass case in the Jackson shul’s foyer. A memorial garden outside is dedicated in Gilbert’s name, but as I tumbled through my adolescence, pausing before Shabbat services to see the preserved parchment through spotless windows hit me harder than any intentional tribute or grave marker.

I haven’t seen that Torah, or the synagogue and its garden, for years now.

These days, I work at Tulane for what remains of their healthcare benefits, and I write about Judaism in the South, often exploring stories I heard but never experienced, encroaching into the region’s past like kudzu vine and all the other clichéd metaphors the plant inspires. I’ve talked with older Southern Jews, and learned their stories. Mildred Covert, who helped coin the term Kosher Cajun cooking, passed away not long after I interviewed her a couple years ago. In May, I received a nearby synagogue’s email announcing the death of Jackie Gothard, a woman instrumental in the revitalization of the area’s Orthodox Jewish community after Hurricane Katrina, a community in which my father completed his conversion when I was a child.

Trying to understand what Southern Judaism is now, I became fixated on where it was before me. Inevitably, that meant watching it fade further away, all while I audaciously tried penning its elegies amidst a backdrop of tiki torches and crumbling Confederate monuments. I saw a proudly Jewish Southern past, weathering anti-Semitism, supporting desegregation, adapting to a region I often say was not built with Jews in mind, but it generated a feeling of being one step behind the moment.

When I was growing up, Jews seemed largely historical. The few I saw were the last Southern stragglers at my synagogue on Friday nights, occasionally swelling in numbers at High Holy Days only to mostly disappear until the next year. I intermittently attended religious classes with a handful of others kids, most of whom went to better private schools during the academic year and escaped to Jewish summer camps I couldn’t afford. I heard stories from the older congregants about a more vibrant Mississippi life, one of bustling Purim carnivals and an active youth group. On television and in books I saw stories of the fabled, exciting “Semitic” worlds in New York, Los Angeles. Otherwise, I was essentially on my own.

Much like many places in the South, my hometown had no real separation of Christianity and state. Mondays meant prayer breakfasts at Chick-Fil-A before school. Fridays entailed dances in a church gymnasium following high school home football games; spotlights shone from balconies on couples dancing too closely to one another. As we got older, friends counted down days until the next Christian straight edge hardcore show, and I’d tag along, trying not to get weirded out by the concerts’ more rally-like qualities.

I was the only Jewish kid at my public high school, a fact that arose almost daily in conversation, often of my own making. I resented the inherent differences between my friends and me, and in turn cultivated that division out of some sense of cultural and religious responsibility, however misplaced or selfish. Jews may have lived here in the South at one point, few but integral, but it felt like those days were all but dead and gone, and I both resented and prided myself on being here, at its terminus.

The South reflects its deaths through a prism. Something often happens to the dead here, an otherworldly transformation keeping a heart, or at least reflections of a heart, beating long after its physical decay. There is an entire literary subgenre dedicated in part to this kind of metamorphosis, often explored — perhaps unsurprisingly — through the eyes of Christian authors who grew up not far from me.

I have to often remind myself American Judaism is still growing, even in the South. New minyans meet in Walmart’s birthplace of Bentonville, Arkansas, as well as in Auburn, Alabama, even as synagogues shut their doors in nearby Natchez and Vicksburg. There are few reasons why many Jews would congregate as they once did in places such as the Mississippi Delta, where a local merchant class could still make a decent living only a few decades ago.

And yet there are no halcyon days; that’s true for Jews and gentiles alike here. As much as we like to remind ourselves of our high points, such as our support of the Civil Rights movement, there were countless willfully blind, or actively racist Jews benefiting from their passably white lives in a supremacist society. Even with that tainted reward, social dynamics rarely allowed for complete integration. I don’t mourn for a staged whiteness against an Old South backdrop. I mourn for passing of people, places, of entire communities who no longer exist to struggle towards something better and holy.

The South does its death better than anywhere else in America. Gilbert’s funeral, while undeniably mournful, was a beautiful thing to witness. His grave was decorated according to his military honors, as well as by his Freemason brothers. Southern Jews and non-Jews bid farewell together not only to a singular man, but a singular era of history. Similar farewells happened at Mildred Covert’s passing, as they will with Jackie Gothard’s. The late Barry Hannah, patriarch of the University of Mississippi’s literary scene and dabbler in the Southern Gothic vein, once wrote “The Deep South might be wretched, but it can howl.” He died one day before my twentieth birthday, the semester I was scheduled to take one of his writing workshops. Another era gone, another era barely missed. But I’m still here, and I often must remind myself I’m not alone.

I’m not sure what to do with the actual Jewish communities now in front of me. There are certainly many more to choose from here than I ever saw before, but I’m used to such a predominantly solitary experience. I find myself anxious in the shuls. Modern movements feel too lax for me, the Orthodox and Conservative too rigid, too demanding of theological and cultural knowledge. Which perhaps explains why I remain focused on an era I never truly was a part of.

The history of Southern Judaism is a history spent picking up the pieces to build something better. In that sense, no different than anywhere else. I’m not sure I still feel quite at home here, even among new, developing Southern Jewish communities, but I feel like there is still something to construct here for myself. The laws of mourning allow for a year of grief, of howling, then survivors must work to move forward in our lives, because that’s what lives are for.

Andrew Paul has written for GQ, Slate, The Believer and Oxford American. He grew up in Mississippi, and currently lives in New Orleans.