In Anton Rubinstein’s ‘Demon,’ A Moving Examination Of Exile 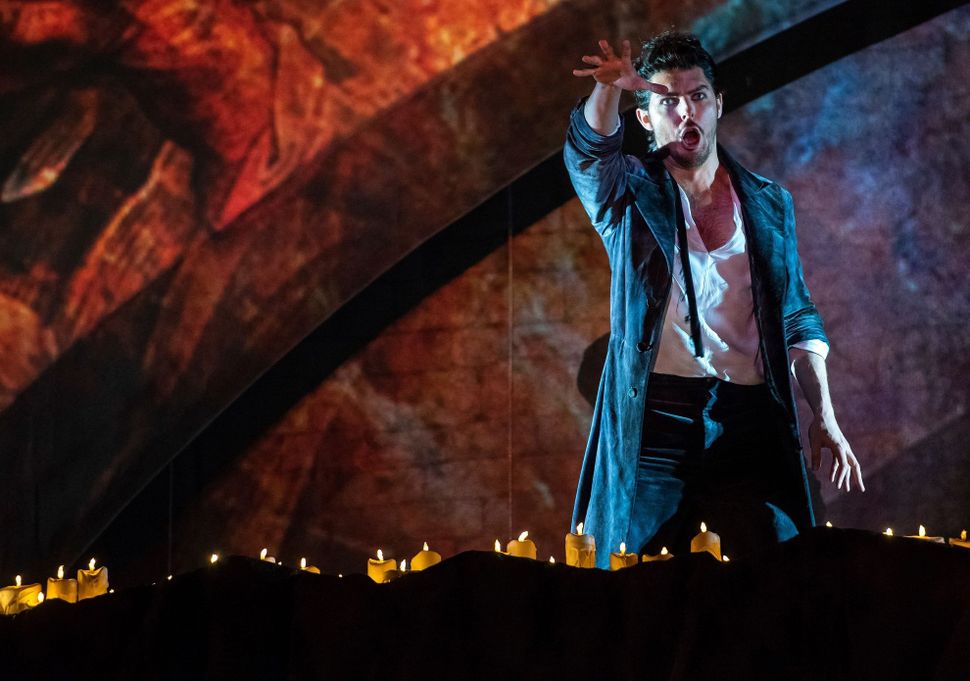 The title character of Anton Rubinstein’s opera “Demon,” appearing at Bard SummerScape through August 5, is an anomaly. He’s not really interested in sowing evil. He doesn’t yearn for heaven; he always found it boring. He’s profoundly skeptical of the unquestioning worship of God. He doesn’t care for the idea of divine love, convinced only human love can redeem him. He commits a grievous crime in pursuit of that love. But his punishment is not relegation to hell; it’s simply to remain solitary on earth.

The opera, directed at Bard by Thaddeus Strassberger, conducted by Leon Botstein and based on a poem by Mikhail Lermontov, sees the Demon, who has been trapped on earth for centuries, fall in love with the soon-to-be married Princess Tamara. He arranges for the death of her intended, Prince Sinodal; Tamara, drawn to the Demon despite her better instincts and horrified by Sinodal’s death, retreats to a convent. The Demon follows her there, elicits a declaration of love from her, and kisses her, prompting her death. An angel appears to guide Tamara’s soul to heaven, offering her redemption. The Demon is forced to stay behind, once more alone.

For all that the Demon is menacing and ruthless, little about him recalls the figure of a demon as popularly portrayed. He’s more desperate than malevolent; he doesn’t appear to really be evil. Although Tamara’s attachment to him proves her downfall, it seems genuine, and apparently unforced. In a program note for the Bard production, the scholar Emily Frey writes that the demon of Lermontov’s poem was “a titanic figure” in the pattern of “Faust, Milton’s Lucifer” and the devilish figures popular among the Romantics. By adopting the musical tradition of the romance, a genre of Russian folk song, Frey writes that Rubinstein’s opera, with a libretto by Pavel Viskovatov, “humanizes its protagonist.”

An additional interpretation is possible: Rubinstein crafted an opera in which the characteristics that made the Demon human closely resembled those that made Rubinstein Jewish.

Rubinstein was born into a Jewish family that converted to Russian Orthodoxy when he was a child, hoping that doing so would gain them entry to mainstream Russian society. Yet Rubinstein remained attached to Jewish identity throughout his career, writing operas about the Maccabees and Moses. Regardless of how well-acquainted Rubinstein was with Jewish ideas about the world’s moral structure, from a Jewish perspective, the limbo Rubinstein’s Demon occupies appears profoundly relatable. Searching for meaning and hopeless of finding it, he is in exile from a home he both misses and found intolerable.

Exile is a powerful theme in “Demon.” The Demon is drawn to Tamara by a difference he perceives between her and her peers, a quality of passion the others lack. That difference is precisely what moves her to seek exile from her own home, sure the future that awaits her there contains nothing good. Sinodal, in the moments before his caravan is set upon by Tartars while delayed on the way to his wedding, muses hauntingly on his desire to span his distance from Tamara. His brief aria is one of the opera’s most lovely moments, musically, possessed of a melancholy Sinodal himself surely does not fully understand. He, unlike Rubinstein, does not know what is about to befall him. He will die in exile from his love.

In a powerful rebuke to operas that exist in a more traditionally Christian moral universe, Sinodal and Tamara both die while seeking resolution, never having found it. Tamara’s salvation is so abrupt as to feel nearly violent. In the closing moments of the Bard production, her spirit slowly heaps dirt onto her own grave, a gesture that evokes Jewish ritual. The orchestra sounds a final chord of grim triumph. You cannot help but feel that she would have preferred to live.

Rubinstein himself was an exile, a convert to Russian Orthodoxy whose peers never let him forget his Jewish origins. By orchestrating “Demon” with the music of Russian family life, he was doing his own kind of searching for a home, embracing the most intimate traditions of a society that often would have preferred for him, as a born Jew, to remain on the sidelines. His tragedy mimics those of the characters to whom he gave plaintive voice. Just like them, he could always see the idealized position in life that he yearned for. And just like them, he could never truly reach it.

In Anton Rubinstein’s ‘Demon,’ A Moving Examination Of Exile