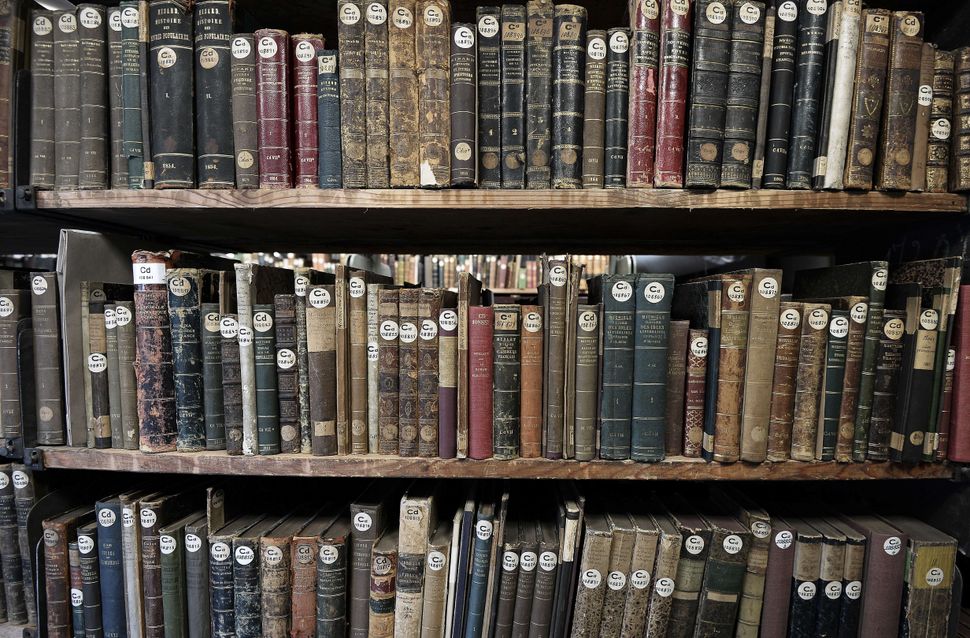 What’s a bookstore owner to do when he’s strapped for cash?

If he’s John Ezra Schulman, proprietor of Caliban Books in Oakland, Pennsylvania, he may — allegedly — pilfer rare books in excess of $8 million dollars from his local library. For almost two decades, Schulman got away with it.

The Pittsburgh Jewish Chronicle reports that Schulman was charged on July 20 with several counts of theft, as well as receiving stolen property, dealing in the proceeds of illegal activity, criminal conspiracy, forgery and — as if that weren’t enough — deceptive and fraudulent business practices.

Schulman allegedly executed his scheme with the help of former Carnegie Library archivist Greg Priore. Priore, who has been charged with library theft, is accused of selling Schulman rare items from the library’s William R. Oliver Special Collections Room, with Schulman paying him in advance by business check or cash. The erstwhile archivist, dismissed in June of 2017 after the start of an investigation into the fate of missing items in the library collection, estimates that since the late 1990s he sold Schulman hundreds of items for somewhere between $40,000 and $50,000. Investigators say Priore is low-balling, claiming his bank account reflects payments totaling $117,700 from Schulman, plus $17,000 in cash deposits from the stolen books.

The New York Post reports that among the books found to be taken from the room is a 1787 first edition of Étienne Claviere’s “De la France et des Etats-Unis,” a book about early French-American relations, signed by Thomas Jefferson. Investigators discovered the valuable tome was sold by Caliban to Bartleby’s Books in Maryland in 2013; four years later, it was found listed on the website of New York’s Bauman Rare Books for $95,000.

In recovered email correspondence between Priore and Schulman, the former mentions financial difficulties related to his kids’s college and private school tuition. The pair’s alleged misdeeds were discovered after an audit of the Oliver Room in 2017, prompted by a complaint by a library employee who noticed many items missing from the collection. The appraisal by Pall Mall Art Advisors concluded the collection was short 320 items and that another 16 were “diminished,” with pages and plates torn from manuscripts.

Knowing the audit was coming, Priore reached out to Schulman to try and “cover things up,” The Chronicle reports. But the duo was sloppy. Schulman kept many of the looted texts in his warehouse in Wilkinsburg, Pennsylvania and a few were recovered by investigators at his home in Squirrel Hill. Many more of the stolen goods were found listed on Caliban Books’s website.

“I should have never done this,” Priore told investigators. “I loved that room, my whole working life, and greed came over me. I did it, but Schulman spurred me on.”

Schulman wouldn’t speak to The Chronicle, but his attorney Albert Veverka told them “we will review the charges and look at the complaint and dissect it… We don’t know the full scope of the allegations.”

On August 1, Judge Jeffrey A. Manning of Allegheny County ruled to allow Caliban Books and its accounts to remain open to provide for Schulman’s employees and to pay for store’s rent and utilities, The Pittsburgh Post-Gazette reports. However, Schulman and his wife, co-owner Emily Hetzel, are forbidden from receiving money from the business. A preliminary hearing for the case is on the books — literally — for October 12.