Among the many oddities of the President Trump years is the extent to which relatively obscure government officials — the kind who, in any other administration, would barely register in the public consciousness — have become subjects of fascination. Hubbubs have been made over the many civil servants who have conscientiously resigned, often through the medium of blistering open letters; Preet Bharara, having been fired from his appointment as U.S. attorney for the Southern District of New York, has become a popular and surprisingly funny critic of the administration. 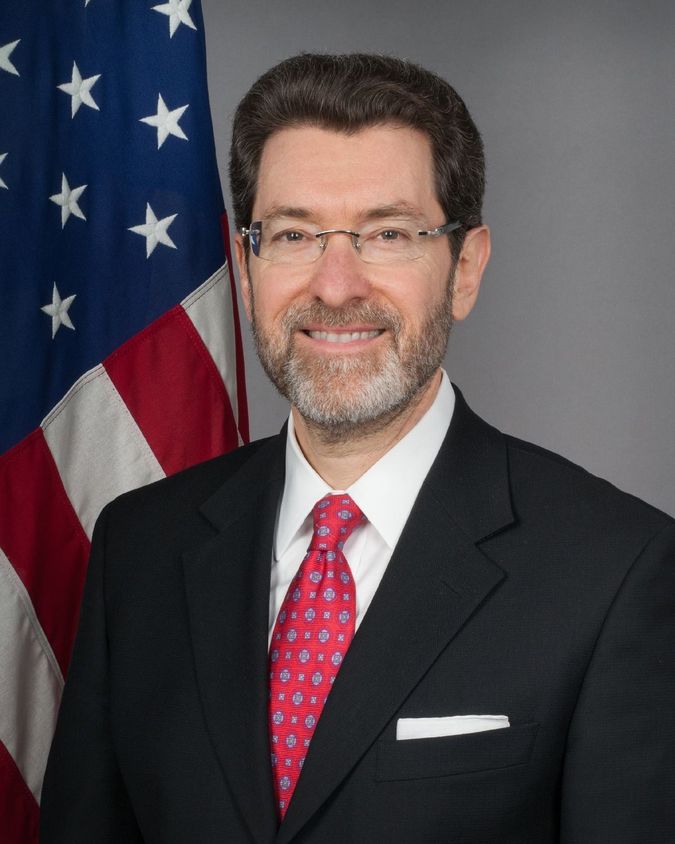 Norman Eisen, in his ambassadorial portrait. Image by U.S. Department of State

And then there’s Norman Eisen, whose government tenure predated Trump’s. Eisen, who worked on Barack Obama’s first campaign for the presidency, served as Obama’s ethics czar between 2009 and 2011. Credited with shaping the Obama White House’s stringent sense of internal ethics, Eisen found himself in an unusual spot as Trump seemed poised to enter the White House in a uniquely ethically compromised position. Eisen, a co-founder of Citizens for Responsibility and Ethics in Washington, took swift action, working with CREW to bring Trump’s many conflicts of interest to light. CREW is currently suing Trump, alleging he has violated the Emoluments Clause — a provision of the constitution that prevents government officials from receiving compensation from foreign governments. Despite the Trump administration’s efforts to stop it, the case has moved steadily forward through the courts.

To those who know Eisen, now a senior fellow at the Brookings Institution, as a political crusader, the subject of his new book, “The Last Palace,” might come as a surprise. Far from a political screed, the book is a painstaking history of the ornate U.S. ambassador’s residence in Prague, which was built by the Jewish financier Otto Petschek. It housed the German commander Rudolf Toussaint as he oversaw the German occupation of Prague in World War II, and was later home to Shirley Temple as she worked to end the grip of the USSR on what was then Czechoslovakia.

Eisen served as the U.S. ambassador to the Czech Republic between 2011 and 2014. Living in the palace, he found its story to be a compelling illustration of democracy. Talya Zax spoke with Eisen about the book over the phone.

Talya Zax: Tell me how you chose your subject.

Norman Eisen: I didn’t choose the subject; the subject chose me. When I left Otto Petschek’s palace behind, I found that — to paraphrase a Kafka saying about Prague — this little mother sinks her claws into you. The palace had really come to occupy my imagination. As I witnessed the stirrings of illiberalism on both sides of the Atlantic, I had the eerie feeling that history was repeating itself. And so I determined to take a look at the history of the last 100 years through the lens of the palace.

What in that history surprised you?

I found hope. That surprised me the most. A substantial amount of the book was written as we saw the rise of these illiberal forces, and there were many days where everyone I would talk to would say, “I just can’t believe it, it’s so horrible, I can’t get out of bed.” I was able to say to them, “Look, it’s been a lot worse than this, and democracy has survived.” Liberalism, not in the sense of [political] parties but in the sense of this package of ideas about freedom, has endured.

You’ve been working on this book at the same time you’ve been working at Brookings and pursuing CREW’s lawsuit against President Trump, among other endeavors. What has it been like to balance these efforts? Have they informed one another in any way?

When I worked on the Obama campaign I used to joke, “I work 75% at my law firm and 75% on the Obama campaign.” It’s a similar idea here. Whatever else is going on in the world, I would close my door and I would write until I had 1,000 words. The CREW work I really tend to do is almost more a hobby. There was a very intense period immediately after the election of the president when both my Brookings scholarship and my CREW work were very intense, and I put the book aside.

Many of the figures in the book have morally complicated arcs. Did diving into their stories give you a new perspective on ethics?

Petschek felt that creativity can have a moral dimension. So he felt that [his] palace expressed his faith in the values of democracy and liberalism, and that those values would last as long as the palace, which was built to last forever. As I was writing and learning, I was always conscious of the moral valence of the story. I became increasingly aware that the cycle was turning again. You had this flourishing of democracy [in] 1918, 1945 and 1989, three great births of democracy and three powerful illiberal counterattacks. I also had the sense: Oh no, it’s happening again. But as before, there would be hope.

Tell me more about that.

Every one of these three great cycles of democracy has been stimulated by the U.S., and the downturn always occurs when the U.S. withdraws from the field. Eventually we always come back to our commitment to democracy on both sides of the Atlantic. If there’s one takeaway from the volume, it’s that we must engage. We cannot avoid, in the U.S., the consequences of European surges in illiberalism.

Your mother was a Czech Jew who survived the Holocaust; in the book, you recount your efforts to try to get her to come stay with you in Prague during your ambassadorship. Did she ever make it?

She always wanted to write a book. So in a way this is my tribute to her. Sadly, she was never able to come. But she did finally agree to come, and as a reflection of my faith, that is where I chose to end the book.

Are there other ways that she influenced the book?

For one thing, she was a wonderful storyteller. And certainly, my perspective, the distance that you need to write about the influential, I think that comes from being outside that world. Having grown up in my parents’ [Los Angeles] hamburger stand — very modest origins — gave me the distance. That’s another way that my mom’s spirit affected the story. She warned me not to get too carried away with myself.

One of the primary characters in the book, Rudolf Toussaint, must have been particularly difficult to write about, as he helped implement policies that directly affected your mother and her family. How did you handle that?

I didn’t want to portray him as simply a one-dimensional symbol of evil. I wanted to understand how he was as a military man who rejected membership in the Nazi Party and who privately disdained the Nazis, and who turned on the SS and the Nazi regime at the end of the war to save Prague. How do I describe the positive side of this complicit figure and make sure I’m right? That was emotionally complicated, and it was complicated to research, and it was morally complicated. Readers will have to see if they think that I’ve been fair to him in depicting his misdeeds but also in illustrating his humanity.

From its first page, on which your mother calls you Nachman, this book has a very Jewish focus. Did working on it change your own relationship to Judaism?

I would describe myself as a traditional or an observant Jew. Like everyone who is seriously engaged with their Jewish heritage, [that relationship is] constantly morphing and changing and growing. Seeing the perspective of a century, if there’s one way that it affected me it was to remind me of the persistence of anti-Semitism. The Jews are really the canaries in the coal mine, and anti-Semitism is an early sign of these illiberal reactions.