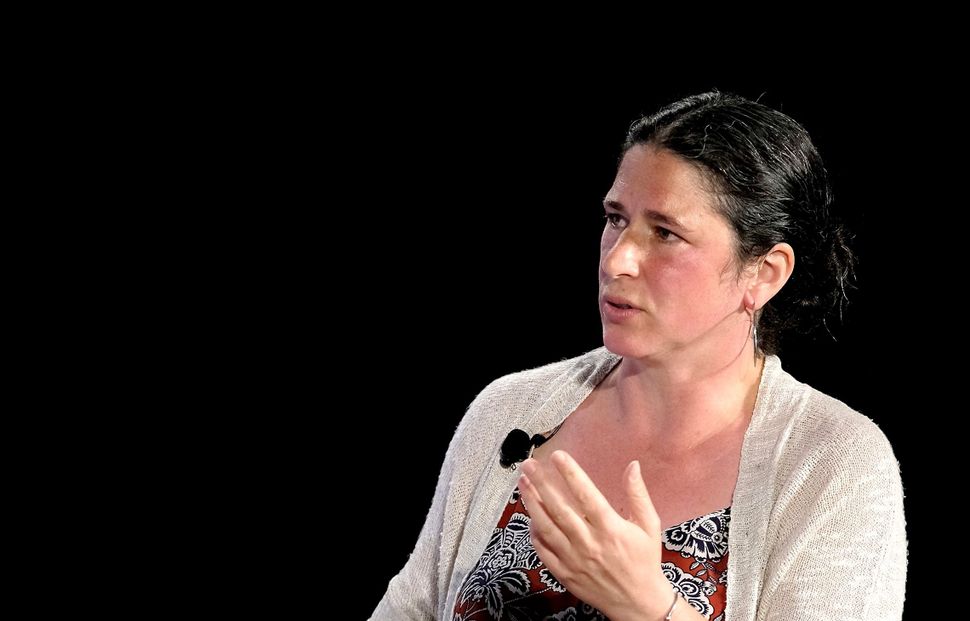 Rebecca Traister at Vulture Festival on May 20, 2018 Image by Bryan Bedder/Getty Images

Rebecca Traister and I spoke about women’s anger on an angry day, during an exceptionally angry week.

It was the last Tuesday in September. The evening before, in the wake of the Deborah Ramirez’s allegation that Supreme Court nominee Brett Kavanaugh had exposed himself to her, Kavanaugh and his wife, Ashley Estes Kavanaugh, had given a lengthy interview protesting his innocence on charges of sexual assault to Fox News. Two days later, Kavanaugh would testify about those allegations in front of the Senate Judiciary Committee, giving a furious performance that stood in stark contrast to the measured, quietly anguished testimony delivered by the first of his accusers, Christine Blasey Ford. The day after that, two women confronted the Republican senator Jeff Flake and told him about their own experiences of sexual assault, a last-ditch effort to persuade him not to support Kavanaugh’s nomination. A specifically female anger was, that week, one of the most visibly prominent forces in American politics.

Traister’s new book “Good and Mad: The Revolutionary Power of Women’s Anger” argues that women’s anger has often been one of the most effective forces in American politics, even when it operates outside the public spotlight. We spoke on the phone; the following interview has been edited for length and clarity.

Talya Zax: What are you angry about today?

Rebecca Traister: Today I’m f**king livid that this man has gone on television and behaved as though him being a virgin has any relevance [to] whether or not he might have committed an alleged sexual assault that had nothing to do with anyone’s virginity. Brett Kavanaugh has been working to do a variation of “a little bit nutty and a little bit slutty,” which is what they used on Anita Hill in 1991. His assertion that he was a virgin is basically asserting his own sort of sexual morality. [It’s] wholly unrelated to whether or not he did the thing he’s alleged to have done.

That’s the particular thing. But there are 45 things I could have told you about.

This book is coming out at a very particular moment in the story of women’s anger that your book helps tell. Have the developments regarding Kavanaugh in any way changed your understanding about the meaning of that anger?

Had I written the book after this happened, there would have been a whole section on this particular nomination, because it’s such a direct echo of Anita Hill. Anita Hill’s testimony is a fulcrum on which the last 25 years of women’s activism and protest hinges.

I decided to write the book in January of 2017, before the Women’s March became the biggest one-day political protest in American history. Then all the candidates started running for office, then there were the airport protests, which were dominated by women — and women judges, a woman attorney general — then it was so many women activists leading the healthcare fight. During all of that I was thinking “Wow, this is my book happening in front of me.” That was before even #MeToo took off, and then the teacher’s strikes, and the women winning their primaries. At any moment, we would have a conversation where you would have said “Wow, this is a particular moment for this book to becoming out.”

This is particularly resonant. But it’s also just the most recent iteration of a very long story.

How did you first become aware of that story?

My last book [was] about contemporary life for unmarried women. Somebody pointed out to me there was this tremendous history of women living outside of marriage; suddenly, I realized there was this story of unmarried women being essential to so much of the change we’ve seen in this country. Because I had just been in the history of so much of this stuff — women’s engagement in the labor movement, the abolition movement in the early 19th century — that history was in my brain, but I hadn’t considered anger as the lens through which to look at it.

As I started to look at the anger that was bubbling up around us in a contemporary way, I was understanding this as a political story. But I was very quickly able to focus in and say “Wait, not only do I want to make the point about how we should be taking contemporary women’s anger seriously, in fact women’s anger has been regarded as marginal, but if you look at the history of social change in this country angry women have often been behind it.”

“Good and Mad” highlights the ways in which our social and political system tends to make a vicious circle out of women’s efforts to change their status as individuals and a group. I’m thinking specifically about your early analysis that “the idea that the nation had moved beyond retro… attitudes about who could lay claim to political power had always been a fable, one that worked to quash the dissent and discourage the disruptive fury that might have otherwise had more power to beat back Trump before his rise.” What do you think it will realistically take to break free from that circle?

There are so many different things that need to be changed, and they build off of one another. I can imagine what I would be driving toward, which would be wholesale re-evaluation of our economic and social policy, better representation in government of what our country’s population actually looks like. It means policy changes around everything from minimum wage and paid leave to reproductive autonomy, reproductive justice, a federal job program, and universal basic income. It means legal changes and changing our ideas about sexual power, about power abuses within the workplace, including in spheres that aren’t by their nature political. I don’t think that history tells us that it’s likely that it will all get done. Do I see this project getting us closer to those goals? Yes.

How has your Jewishness influenced your feminism?

I’m not a person of faith. My father comes from a Jewish family, my mother comes from a Baptist family, I was not raised religious in any direction. However, the left politics in my family were a product of the Civil Rights Era in which my parents had come of age but also the strain of left[ist] Jewish politics that was particular to my father’s family: My grandmother was a socialist, her brother was a Communist Party leader. The Jewish women who I write about in this book are the women of the labor movement of the early 20th century, many of them are immigrant Jews working in the textile factories of New York City: Clara Lemlich, Rose Schneiderman.

In a column you published about Deborah Ramirez, you wrote about her understanding of “the imperfection of her victimhood.” Do you see a connection between her insistence that that imperfection in no way disqualifies her victimhood, and the new inflections of rage on which you report in “Good and Mad”?

I think that anger at inequality and injustice helps us to shed light on the things that we’ve been trained [to think] we don’t have a right to be angry about. I think that shapes the way that we hear a story like Deborah Ramirez’s. I think there stories that are familiar to so many women of having experienced harassment or assault that they would never [report] because they have absorbed the idea that their retelling of it can’t be authoritative, because they were drunk, or they don’t remember it perfectly, or they flirted, or were nice afterward. They can already anticipate the way that their behavior will be used to invalidate the experience. We don’t tell a judge that a blanket denial doesn’t count because there’s a lot of evidence he was drunk at the time, so how could he remember? But we regularly tell women that because they don’t perfectly remember everything that happened their story cannot count.

How do you think that the starkly different ways in which society responds to male and female rage — and specifically white male rage — reflects on the larger scope of the different ways that men and women are received in our political society?

Do you think that anger poses any dangers to the contemporary women’s movement, or is it purely a positive force?

The only thing I think it is purely is potent.