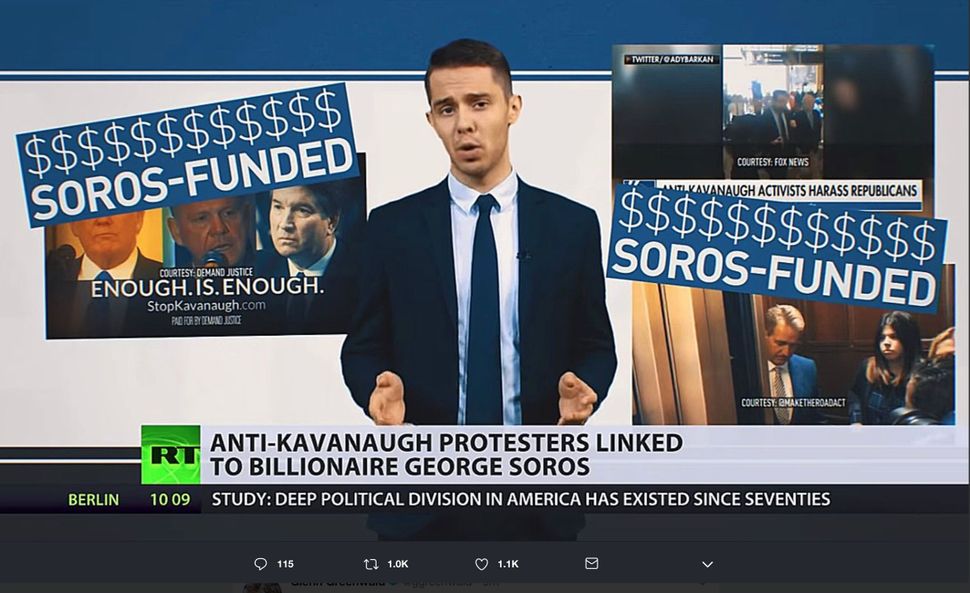 ‘Lou Dobbs, the great Lou Dobbs,” President Donald Trump called him at his Council Bluffs rally on Tuesday, going on to namecheck seven more of his “great friends” on Fox News. It was to Dobbs that Texan congressman Louie Gohmert said that Democrats “might as well raise their forearm and raise their hands and yell, ‘Heil Soros!’”

Gohmert was voicing and Nazifying the subtext of pieces in the Daily Caller and National Review claiming that one of the right’s favorite bogeymen, a rich foreign-born Jew, was paying protesters to confront senators supporting Kavanaugh’s Supreme Court nomination.

“Do you believe George Soros is behind all of this,” the great Fox Business host Maria Bartiromo asked Senate Judiciary Committee chairman Chuck Grassley the next morning, “paying these people to get you and your colleagues in elevators or wherever they can get in your face?” “I tend to believe it,” Grassley answered. “It fits in his attack mode and how he uses his billions and billions of resources. I think it promotes incivility in American society.”

Patient Zero was apparently watching, because 80 minutes later, Donald Trump himself tweeted that “the very rude elevator screamers are paid professionals only looking to make Senators look bad. Don’t fall for it! … Paid for by Soros and others.” When columnists like Slate’s Jamelle Bouie replied that Trump’s tweet “should be understood as both an anti-semitic dog whistle and an attack on the idea of legitimate opposition itself, a tactic imported from european far-right parties,” [sic] RT, which is to Russia’s president what Fox News is to ours, rushed to defend Trump from this “outrage.” (And, in case Facebook stymied their trolls, it added, “Like this story? Share it with a friend!”).

On the heels of Trump’s Soros tweet, Senate Majority Leader Mitch McConnell called the Kavanaugh debate cloture vote. His peroration hit an Orwellian high note: “Justice matters. Evidence matters. Facts matter.” Indeed they do. That night, the Washington Post’s Fact Checker gave Three Pinocchios to the idea of a Soros conspiracy. Yes, a spokeswoman for Soros’s Open Society Foundations freely acknowledged, OSF “has long supported the work of the Center for Popular Democracy,” and yes, the two women who confronted Sen. Jeff Flake were with CPD. But “No,” the Post’s headline ruled, “George Soros isn’t paying Kavanaugh protesters.” CPD gets at most 10% of its budget from OSF, and none of that pays protesters.

(Full disclosure: I direct the Norman Lear Center at the USC Annenberg School, and OSF sponsors work we do in India and Colombia on the depiction of palliative care on TV. No Republicans have been harmed in the making of those shows.)

The hit on Soros offers an opportunity to situate this miserable moment in a historical context. Soros’s mentor was Sir Karl Popper, the Austrian-British philosopher whose two-volume masterwork on the origins of tyranny, “The Open Society and Its Enemies,” gives its name to Soros’s philanthropy. My tutor at Cambridge assigned the books when I was reading Plato and Marx (the “Enemies” in the title, along with Hegel); together with his work on the philosophy of science, no other thinker had a bigger impact on my education than Popper. 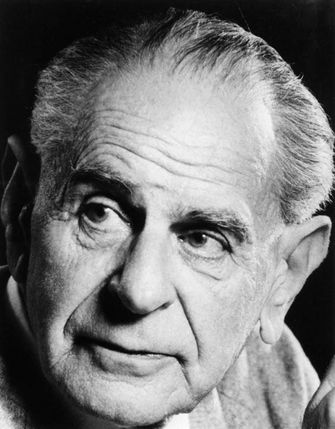 Popper says he decided to write “The Open Society and Its Enemies” in March 1938 on the day news reached him in New Zealand, where he’d fled the year before, that Hitler had invaded Austria. When Popper finished it five years later, war still raged. The fate of civilization was far from certain, and even though he never explicitly mentions the war in it, those stakes lent his argument an urgency and suspense that’s a rarity in philosophy.

The story of civilization that Popper tells is the transformation from tribal culture — a closed society, ruled by tyranny, assured of security, submissive to magic thinking; to an open society — not shrinking “from the task of carrying our cross, the cross of humaneness, of reason, of responsibility.”

This transformation is never final. It recurs across the ages, and it springs from our ambivalence about democracy. The strain of freedom and the burden of seeking truth arouse in us a reactionary temptation, a nostalgia for the old order. “The more we try to return to the heroic age of tribalism,” Popper writes, “the more surely do we arrive at the Inquisition, at the Secret Police and at a romanticized gangsterism. Beginning with the suppression of reason and truth, we must end with the most brutal and violent destruction of all that is human.” We have, he says, “a simple decision before us. We can return to the beasts. But if we wish to remain human, then there is only one way, the way into the open society. We must go on into the unknown, the uncertain and insecure, using what reason we may have to plan as well as we can for both security and freedom.”

Is there a better term for the way Putin turns Trump on, and Trump turns rally crowds on, than “romanticized gangsterism”?

Popper fell into a depression after he finished “The Open Society and its Enemies.” He wrote in 1950 that “the strong feeling of optimism which pervades the whole book struck me more and more as naïve, as the years after the war went by.” But his funk passed “largely as the result of a visit to the United States.” What made him “in spite of the present world situation… feel as hopeful as I ever did” was Americans’ longing “to free themselves and their minds from the tutelage of authority and prejudice,” “their attempt to build up an open society… that measures up to their standards of freedom, of humaneness, and of rational criticism,” “their readiness to share the burden of responsibility for avoidable suffering, and to work for its avoidance.”

Popper believed that “the greatest of all moral and spiritual revolutions of history” began with the Enlightenment. Among its highest achievements: Western democracies, including ours, committed to bettering the lot of their citizens. Our impatience to accomplish that “is as admirable and sound as it is dangerous.” He calls it a danger because of the risk that when we push for change, we sweep away dissent, force consensus and fail to hold abuses of power accountable.

The appeal of authoritarianism, evident in a far right ascendant around the world, is that the difficulty and disagreement inherent in public deliberation go away, and tribes rule. Frustrated by democratic conflict, riven by inequality, swamped by human catastrophe, bit by bit we trade away our freedom in exchange for the person who says “I alone can fix it.”

That dark bargain, Popper says, “creates powers of appalling destructiveness.” Its anthem, in the idiom of our troubled times: “Heil Soros!”

But there is also hope. Not the naïve optimism Popper faulted himself for, but hope nevertheless. At the close of his preface, he permits himself to dream that the lure of tyranny “may yet be conquered.” Wielding what weapon? I can think of one. It exposed the beast in Gohmert; it revealed how instinctive it is for Grassley and Trump and Fox News to jump on an anti-Semitic bandwagon; it stirred Flake’s humaneness. Two women in an elevator staved off powers of appalling destructiveness for one darkening week, and they did it armed with eight simple words: “Look at me when I’m talking to you.”