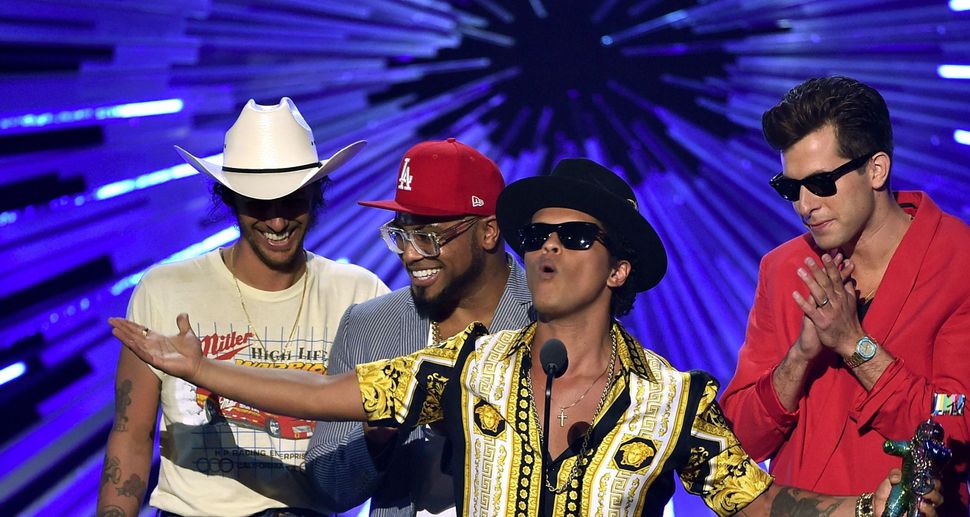 On October 18, 2018 Slate revealed their “New American Songbook,” drawn from the insights of critics and musicians including Chuck Klosterman, Carl Wilson and The Hold Steady keyboardist Franz Nicolay. As is typical, Jews over-performed, even beating out those famous Swedish masters of Pop Max Martin and Dr. Luke. Of the 30 tracks to be enshrined into canon, eight have Jewish singers or songwriters behind the beats.

At number 30 is “Let it Go,” that indelible hit known to parents and young children worldwide. The Oscar-winning tune’s from Disney’s 2013 flick “Frozen” where it was sung by Jewish songstress Idina Menzel (aka Adele Dazeem).

At 28 was 2013’s club jam “Get Lucky” by Daft Punk, who are known for their face-hiding headgear. One half of the French duo, Thomas Bangalter, has a Jewish father, though he was raised in a non-observant home.

26 on Slate’s list is “Wagon Wheel” by Old Crow Medicine Show. The song’s chorus and melody are cribbed from an unreleased Bob Dylan demo from 1973. For the record, we think keeping this terror of an earworm in the ashbin of music history was the right call.

Israel Kamakawiwoʻole, despite the name, was not Jewish. But the hits that got him to 24 on the New American Songbook, “Somewhere Over the Rainbow/What a Wonderful World,” were written by a group of mensches. Edgar Yispel “Yip” Harburg penned the lyrics to Harold Arlen’s music for Dorothy’s immortal “I Wish” song. George David Weiss and Bob Thiele are the pair behind Armstrong’s “What a Wonderful World.” Together they’re only six short of a minyan.

“My Heart Will Go On,” from 1997’s “Titanic” is number 15 in Slate’s ranking and was co-written by California-born Jew James Horner. Horner, who died tragically in a plane crash in 2015, was fonder of Celtic sounds than Klezmer ones. Sung by Quebicois diva, Céline Dion, the ballad worked, entering into the repertoire of street musicians everywhere.

1999 was a huge comeback year for Santana. His album “Supernatural” took home eight Grammys, including Album of the Year. Its blowout track, the recipient of two Grammys on its own, was undoubtedly “Smooth,” which lands at 14 on Slate’s list. Matchbox 20 front man Rob Thomas shares a credit with co-writer Itaal Shur who is the son of Israeli and Jewish music composer Bonia Shur who served as the director of Liturgical Arts at Cincinnati’s Hebrew Union College. If you play this bop backwards you can hear a shofar call.

Aubrey Graham, better known as Drake, cracks the Slate Songbook at number 12 with “Hotline Bling.” The hook of this song is beyond reproach, even if his widely-reported texting of 14-year-old actress Millie Bobby Brown makes its subject matter a bit uncomfortable.

They’re not the new Simon and Garfunkel, but Mark Ronson and Bruno Mars are still a Jew-y duo. 2014’s “Uptown Funk” enters into the annals of Slate’s New American Songbook at number 6. I bet you’re hearing it in your head right now. Maybe imagining the music video. Maybe even that parrot that seems to know the tempo. It’s a throwback track and, for that reason, timeless. May it, and all the winners (minus “Wagon Wheel”) be inscribed in the Songbook of Life for years to come!