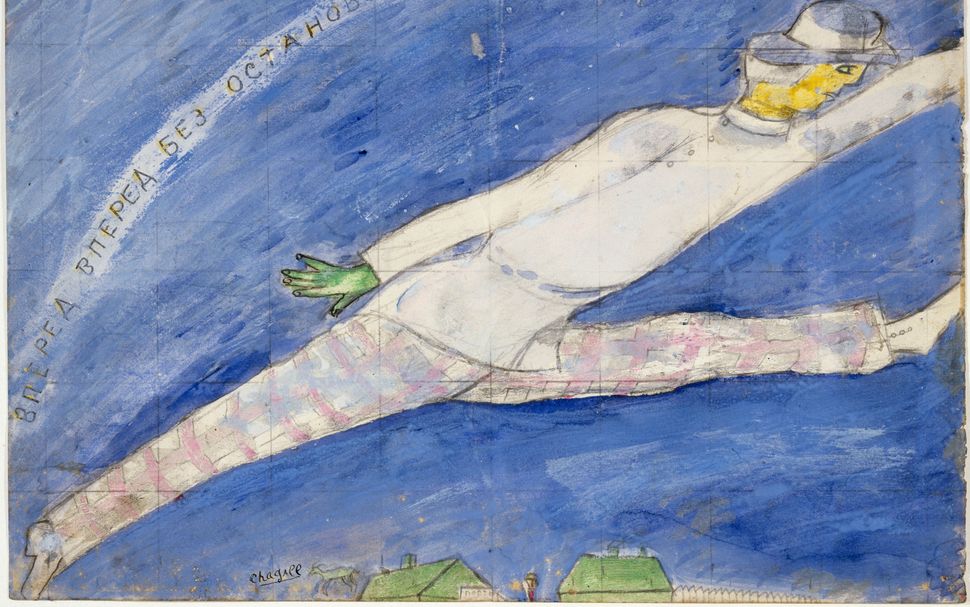 When it was over and done with, perhaps the main thing that stood out about the Soviet Union was its success in restricting the character of its citizens. As Masha Gessen wrote in her 2016 book “The Future is History,” in every totalitarian state “The shaping of the New Man is the regime’s explicit project.” Under the Soviet regime, that project “reward[ed] obedience, conformity, and subservience.”

Yet before the Soviets shaped their New Man, there was debate over just what he should look like. As the Jewish Museum’s new exhibit “Chagall, Lissitzky, Malevich: The Russian Avant-Garde in Vitebsk, 1918-1922” makes clear, that debate was fundamental to the growth of post-revolutionary Russian art, newly and deeply intertwined with politics and philosophy. On one side was Marc Chagall, whose magic-infused work, which featured strangely-colored animals, floating humans and a freewheeling spirituality, remained staunchly rooted in figurative art. On the other was Kazimir Malevich, who preached a strictly prescribed, abstract and often confrontational mode of art-making that he labeled Suprematism. 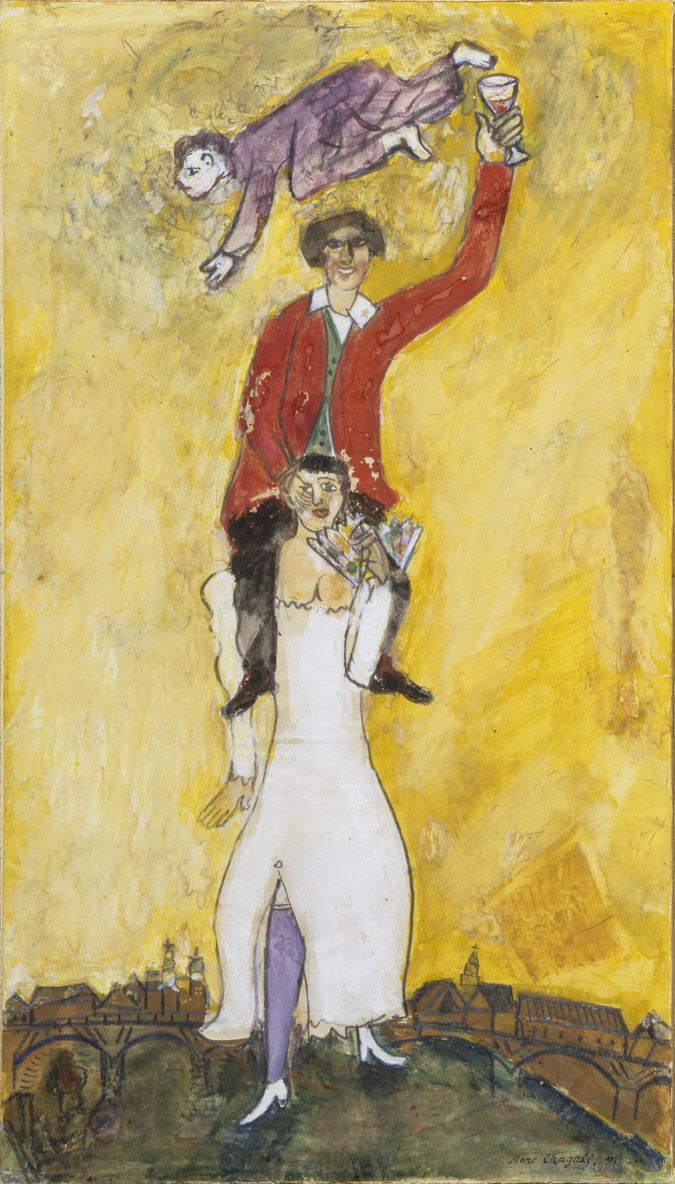 The conflict played out in Vitebsk, now in Belarus, Chagall’s hometown. Chagall established the People’s Art School there in 1918; the institution, part of a wave of populist art schools the Bolsheviks established shortly after the 1917 revolution, offered free entry to the general populace. Chagall’s leadership encountered an early snag, namely, that the residents proved wary of his work, finding its avant-garde liberties to be, well, weird. Determined to popularize revolutionary art, he attempted to win the town over by hiring as instructors artists working in a broad range of styles, each of whom Chagall found revolutionary.

That was the second snag: Chagall’s ideas about what counted as revolutionary, it turned out, were opposite to those that would prevail on the subject.

The exact ways in which his understanding of the new artistic moment differed from the mainstream are made clear by one of the first paintings in the Jewish Museum exhibit: Chagall’s “Double Portrait with Wine Glass,” painted between 1917 and 1918. In it, the artist, dressed in an exuberantly red tailcoat and holding the titular wine glass gleefully aloft, sits on the shoulders of his white-clad bride, Bella. It’s a portrait of a couple caught up in their love, at least on the surface. But the key to understanding it as a statement of artistic principle lies in its coloration.

After the toppling of the tsarist regime in 1917, the same year Chagall began painting “Double Portrait,” Russia was caught in a civil war between the White and Red Armies. The anti-communist White Army had its roots in the former imperial forces; the Red Army was Communist, and ultimately, victorious. One can imagine the danger, in that time, of painting red and white joined in the celebratory intoxication of love and art.

Chagall’s choice to embrace that danger appears, from the perspective of history, to have been fully integrated with his particular revolutionary sentiments. His idea of revolutionary artwork centered on equality: that of differing artistic ideals, yes, but also that of all Russian citizens. As a Jew, Chagall had never been granted the full privileges of citizenship prior to the Revolution. Now that he was a newly-minted citizen, his painting suggests he harbored a magnanimous vision of the future of Russian solidarity, one that encompassed as equals those who supported the Revolution and those who opposed it. 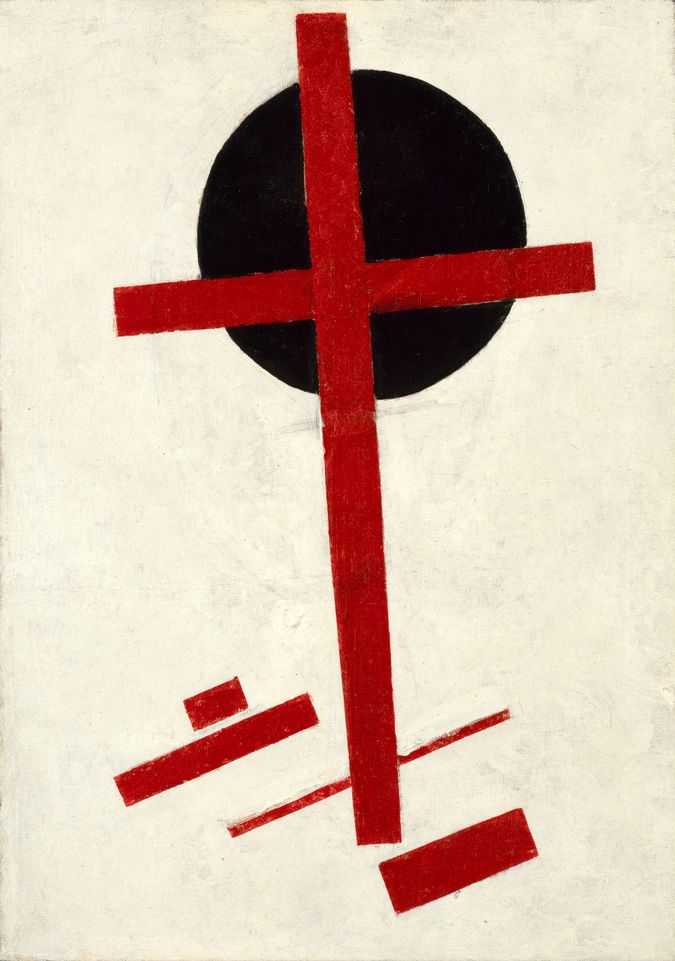 In that quest for equality, Chagall’s story-driven, folk-inflected art was resolutely proletarian. Yet in the Vitebsk People’s Art School, his influence was quickly overwhelmed by that of Malevich’s Suprematism. Malevich, whom Chagall admired, arrived to teach at the school in November 1919, slightly less than a year after its opening. By the following June, Chagall had left the school for Moscow. As curator Angela Lampe of Paris’s Centre Pompidou, where “Chagall, Lissitzky, Malevich” originated, writes in an essay in the exhibition’s catalogue, Chagall’s students switched their allegiance to Malevich in a matter of weeks. Chagall’s pluralistic experiment, in which he imagined his figurative methods of revolutionary art could prosper alongside Malevich’s abstract ones, had failed.

That loss presaged further losses the reinvented country would face. While Malevich’s work was densely creative and spiritual, the Suprematist school he founded, while energetic, came to be rigid and homogenizing. It was also tellingly disconnected from the human form, depicting people only as angular and precisely disordered assemblages of parts. Little could have been more different from Chagall’s humanistic painterly storytelling. Malevich could see where things were heading; while truly original storytelling would prove anathema to the Soviet enterprise, his evocative, elusive work, alongside that of his protégées, made an easy fit for the Soviet Union’s lack of clarity about its real purpose. That’s part of why, today, Chagall’s work registers internally like a song, a nuanced and emotive reflection on something both individual and essential. Malevich, however, provokes an admiring flinch; it is, in some fundamental way, martial.

The split between Chagall’s work and Malevich’s captured an essential truth about the New Man: So long as he was defined by a consistent set of traits, rather than contradictory ones, he would never be whole. The vision of artistic harmony in Chagall’s “Double Portrait with Wine Glass” caught a brief moment of balance, in which it seemed possible that the people of the new Russia, and specifically its artists, could be individual and revolutionary, diverse and unified. Yet even in the painting, Chagall’s posture is visibly perilous. His hopefulness was a model for the hopefulness of his country, more fragile than any of the revolutionaries were willing to admit. For him and them alike, the balance couldn’t hold.