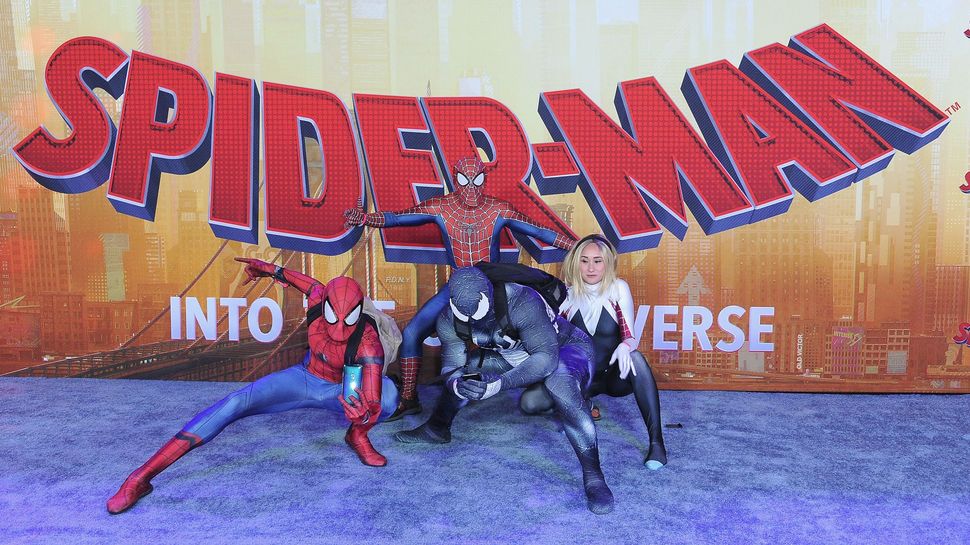 Cosplayers dressed as Spider-Man arrive for the World Premiere Of Sony Pictures Animation And Marvel’s ‘Spider-Man: Into The Spider-Verse’ held at Regency Village Theatre Image by Getty Images/Albert L. Ortega/Contributor

In the new film “Spider-Man: Into the Spider-Verse” a tear in space-time introduces audiences to a coterie of new web slingers. We make the acquaintance of Penny Parker, a girl from the future whose spider powers come courtesy of a giant robot; Spider-Noir, a grayscale arachno-man from the 1930s; and even Peter Porker, aka “Spider-Ham,” a Chuck Jones-inspired pig who, yes, has all the trademark Spidey skills.

Also in the mix is a Jewish Spider-Man.

Bear with us and beware spoilers below: It all starts when a goyische-looking Peter Parker in one universe dies. Just after this blonde Peter expires, an accident involving something like the Large Hadron Collider creates an inter-dimensional hole. A different, brunette Peter Parker, from a parallel universe (which some have speculated is the world of the original comics), slips through into the universe of the Dead Peter Parker — along with Spider-Ham, Spider-Noir and Penny Parker. This other Peter Parker, “Peter B. Parker” can’t live long outside his own dimension without fading into the webby ether. So the film’s protagonist Miles Morales, an Afro-Latino teen recently bitten by a radioactive spider, forces Peter B. Parker to train him to take over for the Dead Peter Parker of his own universe. (Things get sticky when you dabble in string theory).

Peter B. Parker has swung into a rough patch following his divorce with Mary Jane Watson. But in recounting his tale of marital woe, he gives us what may be the first definitive proof that at least one Spider-Man is a member of the chosen people — and I don’t mean the Avengers. Over Parker’s narration, we see a flashback of his wedding in which he steps on a glass. Mazel!

Before we wonder about which havdalah set was listed in the Parker-Watson registry, we must first confront some doubts. In a piece for Vulture — the New York Magazine entertainment site, not the Spider-Man villain — the film’s directors addressed the sequence’s Semitic implications. Their conclusions were mixed.

“I happen to have a personal conviction, for many reasons, that Peter B. Parker is likely Jewish,” co-director Rodney Rothman told Vulture. But, he said, “because this is an alternate universe, we just don’t know. It could be that Buddhists step on glass. It could be that M.J. is Jewish and Peter converted.”

“It could be, maybe that’s not a glass!” added co-director Peter Ramsey. (It’s worth noting that most modern Jewish weddings replace the traditional glass with a lightbulb, as the latter are easier to smash.)

But the film’s Hebraic touches don’t begin and end with the shattered glass. While Peter B. Parker of “Into the Spider-Verse” loves cheeseburgers and records a Christmas album, he also has a deep affinity for bagels and is voiced by actor Jake Johnson, whose father is Jewish. But Peter B. Parker isn’t the first iteration of the wall-crawler to be considered a member of the tribe.

Avi Arad, the Israeli producer behind every Spidey film since the superhero’s big screen debut in “Spider-Man” (2002), trumpeted Peter Parker’s Jewish roots in Queens. “These are practically shtetl Jews living in Queens,” Arad told the Times of Israel in 2012. Arad also noted Parker’s quips were pretty Jewish or even, as Slate reported in 2014, Borscht Belt-y.

“I was mainly just messing with people,” Rothman told Vulture, of his choice to include Spider-Man’s Jewish nuptials in “Into the Spider-Verse,” “but I would say, ‘You know Spider-Man is Jewish, right?’ I was like, ‘His name is ‘Spider-Man,’ just for starters.”

So, Mr. Spiderman, have you met the Goldmans?