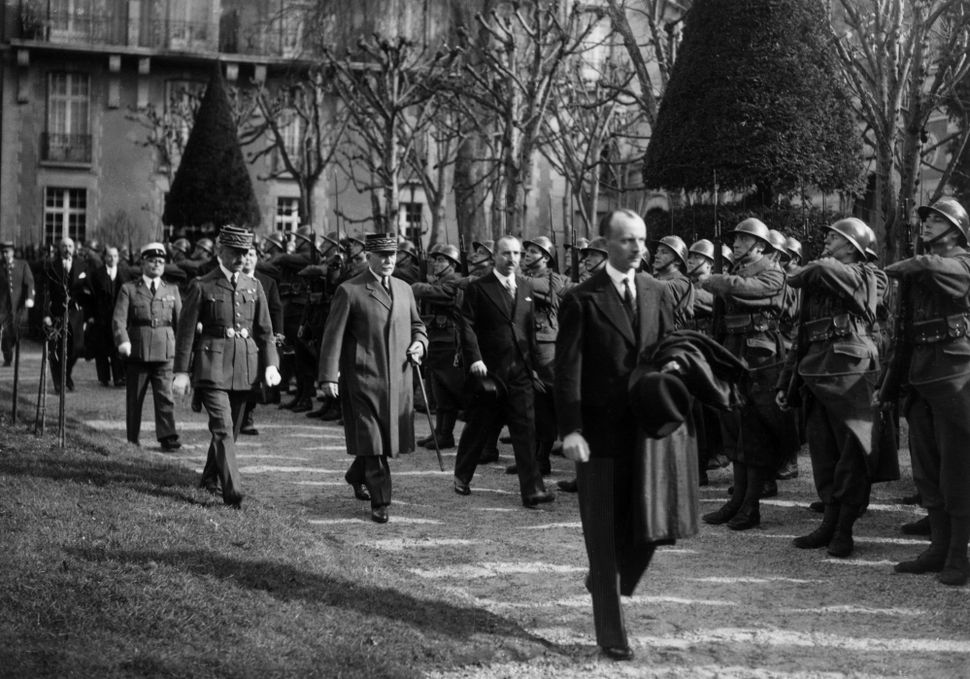 In 1994, the French historians Henry Rousso and Éric Conan published “Vichy, un Passé Qui ne Passe pas.” While titled “Vichy: The Ever-Present Past” in the excellent American translation, the phrase nevertheless has a slightly different resonance in the original French. The alliterative conjunction of un passé (a past) and passer (to pass) carries a visceral punch — namely, a past that doesn’t let go or cannot be digested.

In fact, when it comes to the role of Vichy in France’s collective memory, Ridley Scott has a step up on William Faulkner. Yes, the past is not only not past, it is also not even dead. Instead, like the creature in “Alien,” it has the knack, from time to time, of suddenly bursting out of a nation’s chest cavity.

Ever since World War II, Vichy has meant so much more than the graceful town nestled in central France, famed for its thermal spas and mineral water. Despite the efforts of local leaders to overcome the dark associations, the word has come to distil France’s bitter experience of occupation, collaboration and accommodation with Nazi Germany. Like the thermal waters of the town, it is a history that continues to bubble and belch, at times with enough force to upend French politics and culture.

This is particularly the case with the regime’s responsibility for the appalling fate of French and foreign Jews. A quarter century has passed not just since the publication of Rousso and Conan’s book, but also since then-President Jacques Chirac’s public recognition of France’s role in the deportation and death of more than 70,000 French and foreign Jews. Recalling the 1942 roundup of Jews by French police, he declared that France, “the homeland of the Enlightenment and rights of man, a land of welcome and asylum, on that day committed the irreparable.”

Yet even the irreparable is not exempt from the irresponsible, who, for personal or ideological reasons, slap the label “fake news” on historical truths. Over the past few years, this has been most notably the case with Éric Zemmour. A columnist for the conservative newspaper Le Figaro and a controversial media celebrity, Zemmour styles himself as politically incorrect, while his legion of critics instead slam him as a political arsonist.

A few years ago, Zemmour burnished this reputation with “Le Suicide Français,” a thick and tendentious book that claimed, among other oddities, that Vichy actually saved the lives of thousands of French Jews. He argued that the regime managed to save 75% of French Jewish lives by sacrificing to the Germans those foreign Jews who had fled to France. In response, leading Vichy scholars, including Robert Paxton, assailed Zemmour’s amoral and ahistorical reasoning, noting that Vichy’s anti-Semitic policies and legislation — undertaken on their own volition — effectively painted bullseyes on the backs of all Jews in France, whether French or foreign.

Given the dramatic uptick in anti-Semitic attacks in France, and the rise of ethno-nationalist movements like Marine Le Pen’s Rassemblement National — the one-time Front National created by her father, Jean-Marie Le Pen, the now octogenarian anti-Semite and Vichy apologist — Zemmour’s hacking of the historical record is all the more worrisome. For this reason, there is much reason to welcome the recent publication of Laurent Joly’s new book, “L’État Contre les Juifs.” Joly belongs to a new generation of historians who, while shaped by the pioneering work of Paxton, Michael Marrus and Serge Klarsfeld, are adding crucial insights into the nature of the Vichy regime.

These insights, at times, push gently against the Paxtonian paradigm. For example, Paxton and Marrus have argued that Vichy’s anti-Semitic policies were, in effect, the translation into bureaucratic planning of the long and lethal traditions of ideological and theological anti-Semitism. While Joly does not dispute the persistence of these toxic strains at Vichy, he suggests that political opportunism also played a crucial role. He notes that the principal architect of anti-Semitic legislation in 1940, Marcel Peyrouton, was a professional politician whose technocratic outlook and Radical background — the misleading moniker for the political party committed to secular and republican ideals — were hardly the stuff of wild-eyed anti-Semitism.

Yet Joly does not suggest that Peyrouton’s lack of ideological or religious fervor makes his role less damning. (One could argue, à la Hannah Arendt, that in fact it makes his actions more damnable.) Instead, he rightly suggests that his account is truer to a complex past. In the context of a Nazi-dominated Europe, Joly insists that it makes little sense to make a claim for an “autonomous” variety of anti-Semitism, one unique to French soil. At the end of the day — and at the end of the rail line to Auschwitz from Drancy — the racial character to Vichy’s anti-Semitic legislation owes far more to the racial laws written by German jurists than to the ideological ravings written by Charles Maurras.

In his book, as well as in a recently released documentary film, “La Police de Vichy,” Joly holds a special place in the historian’s hell for the French police. He reminds his readers that the Paris gendarmerie was, during the 1942 roundups, responsible for the arrest and deportation of more than 13,000 Jews, including some 4,000 children. “From the very first day of the occupation,” the film’s narrator observes matter-of-factly, “the Germans are taken aback by the astonishing spirit of collaboration shown by the French police.” To add insult to the irreparable, many of the same gendarmes who participated in these arrests joined the Resistance at the 11th hour, thus whitewashing their actions from 1940 to 1944.

The dazzling commercial success of Zemmour’s books, Joly remarked in an interview, is “rather disturbing.” It is all the more disturbing, he noted elsewhere, that in the confusion of our current political and cultural scenes, the “words of the historian have become less audible.” To his great credit, this diagnosis has led Joly to speak louder. Whether the searing images of his film and the severe style of his book can dampen the fires set by the likes of Zemmour nevertheless remains to be seen.

Robert Zaretsky teaches in the Honors College, University of Houston. His latest book is ‘Catherine and Diderot: The Empress, The Philosopher and the Fate of the Enlightenment.’