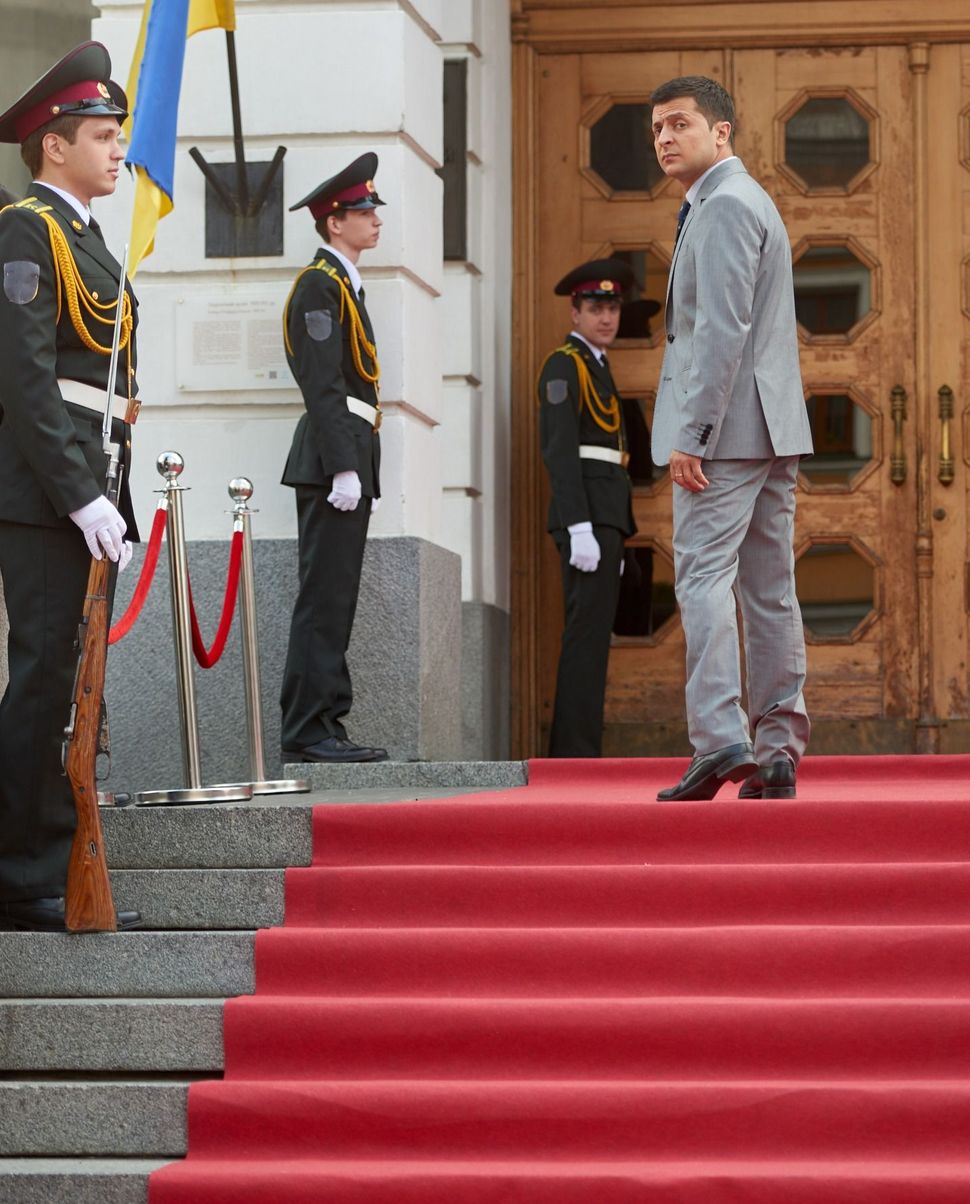 It’s become a cliché in the United States to say we have a Reality TV President, but Ukraine may well get a sitcom Head of State. 40-year-old Jewish comedian Volodymyr Zelenskiy formally announced his plans to run for the Ukrainian presidency shortly before midnight on New Year’s Eve

If he wins, Ukranians may not be too shocked to see him in office, since Zelenskiy already plays the fictional president of Ukraine on the television show “Servant of the People” — which shares the name of the political party with which he’s running. That party is led by Ivan Bakanov, legal counsel for the TV studio Kvartel 95, which produces Zelenskiy’s show.

Zelenskiy’s comedy consistently tops Ukranian TV ratings and has a large viewership in Russia and Israel . The comedian is also performing well in early stats for the presidential race. Bloomberg reports that a poll conducted by the Ilko Kucheriv Democratic Initiatives Foundation recently ranked Zelenskiy third among potential candidates for the March 2019 election, behind Ukraine’s former prime minister, Yulia Tymoshenko, and current president, Petro Poroshenko. Israel’s Ynet News that a more recent poll put Zelenskiy second in the running behind Tymoshenko. Per Ynet, Zelenskiy was drawing the support of some 15% of the populace and a building a strong base with Ukraine’s youth. In that polling Tymoshenko just edged Zelenskiy out with 18% of the votes; the incumbent Poroshenko came in fifth with a paltry 8.6%

Zelenskiy, who was born to Jewish parents in the Ukrainian city of Krivoy Rog, is an equal-opportunity political critic. Details of his platform are hard to come by in English, but it’s possible to discern a preliminary message from his work in entertainment. “Servant of the People” is about a schoolteacher who becomes president after a clip of his “Network”-style tirade about government corruption goes viral, and he has been outspoken in blaming Ukraine’s economic crisis on the current administration. Israeli-Ukranian billionaire Ihor Kolomoyski, a vocal detractor of President Poroshenko, owns the 1+1 channel, on which Zelenskiy’s show airs and where the televised announcement of his candidacy was made. It’s possible Zelenskiy will be a gentler politician, too, as he provides the voice for lovable bear Paddington Brown in the Ukrainian dubs of the “Paddington” films.

If the current polling holds all presidential contenders will fall short of the absolute majority needed to be elected outright in a first round of voting, but Zelenskiy will maintain his position as one of the two top polling candidates. From here he will face the other highest polling candidate, projected to be Tymoshenko, in a runoff — no laughing matter.