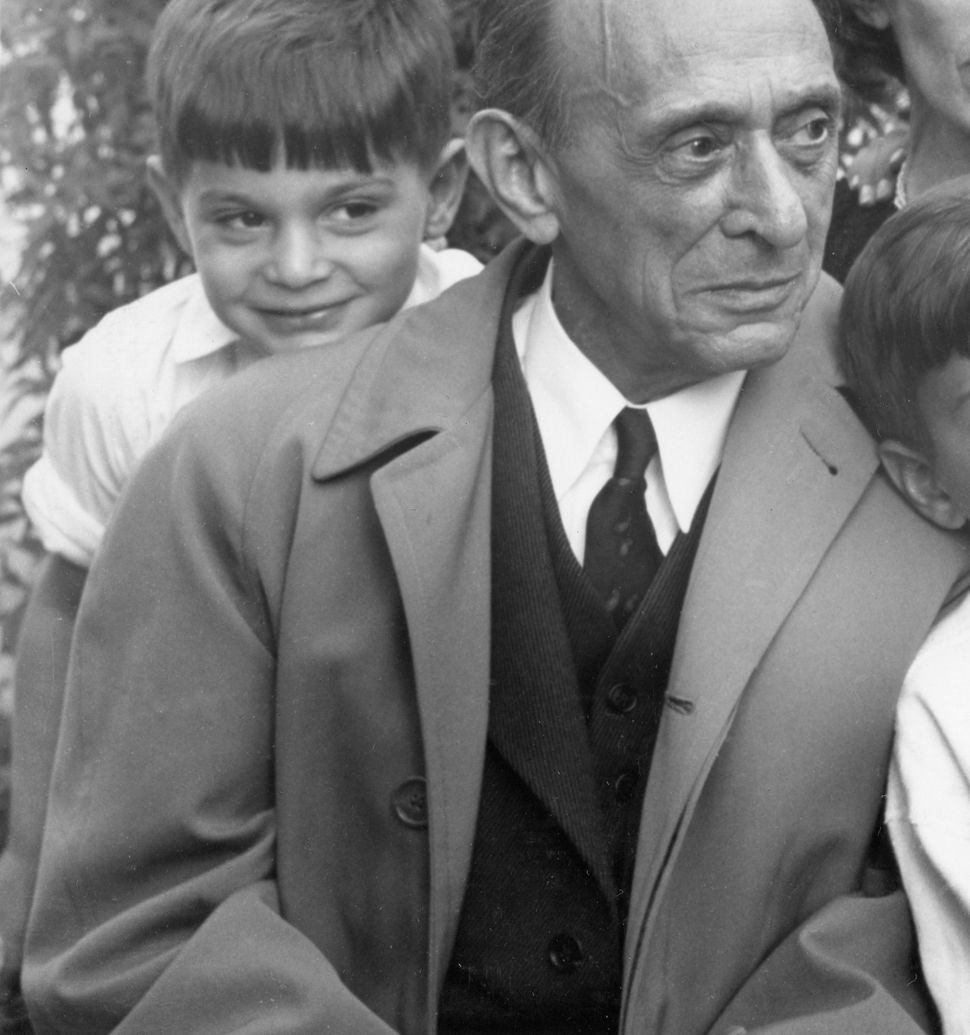 What happens in the mind of a genius?

Mozart’s mind was puerile; if his extraordinary sophistication with music extended to other aspects of his psyche, he didn’t show it. Van Gogh was subject to psychotic episodes, a struggle that may have impacted his work, although we can only speculate. Bits of Einstein’s brain are preserved in Philadelphia for scientific research. But the brain and mind are linked in profound and complex ways, and science may only be able to look so far.

So history, in trying to understand the world’s best minds, has often turned to those minds’ most unfiltered expressions: Their letters.

Arnold Schoenberg was certainly a genius. The Austrian Jewish composer, born in 1874, invented the twelve-tone method, a musical structure that underpinned many of the 20th century’s most significant classical music achievements — and many of that era’s most contentious musical debates. He inspired the work of generations of musicians, artists and thinkers, including the pianists Artur Schnabel and Glenn Gould, the painter Wassily Kandinsky, the novelist Thomas Mann and the philosopher Theodor Adorno. Writing in The New Yorker in 2002, Alex Ross called Schoenberg, succinctly, “the man who invented what is still known, after almost a hundred years, as ‘modern music.’”

But, with notable exceptions, Schoenberg’s letters could largely have been the work of just about anyone. In “Schoenberg’s Correspondence with American Composers,” translated and edited by the Arizona State University musicologist Sabine Feisst, Schoenberg schedules and reschedules music lessons, scolds producers for making improper plans for the performance of his work and delivers season’s greetings. The mind of a genius is sometimes foreign — if you can make sense of the sentence “‘Darstellung’ means to show an object to a spectator in such a manner that he can perceive its components in functional motion at once,” please let me know — but also familiarly preoccupied with logistics. That mind could also be extremely (if unintentionally) funny. In one scathing missive to the composer Edgard Varèse, who had planned a performance of Schoenberg’s “Pierrot lunaire” without sufficiently — at least in Schoenberg’s eyes — consulting its composer, Schoenberg signed off with the terse sentiment “Hopefully some other time I will have reason to be more cordial.”

“He was a very critical mind,” said Feisst. “He had very, very high standards, and some of that comes through in his letters. It was a driving force for him to strive for the highest level of accomplishment.”

But, she said, “there’s also a lot of warmth that comes through.” (And more: Feisst described Schoenberg’s writing as “entertaining, educational, spicy.” Spicy!)

Particularly compelling, and most at odds with the composer’s reputation for sternness, is the correspondence in which Schoenberg attempted to engineer his family’s rescue from Nazi Europe. After spending much of his career in Germany, Schoenberg moved to France in 1933 and the United States in 1934. In 1939, he wrote to Hugh Hodgson, an acquaintance at the University of Georgia, to request help securing an academic position for his son-in-law, Felix Greissle, who with Schoenberg’s daughter and their two sons, faced the prospect of being forced out of the U.S. after their visitor visas expired. “No matter how small his position might be, not matter how low the salary is (if there is one at all, because I will support him), if he only has an appointment and can prove that he is asked for a teaching position, he will get a preferred visa, and this painful struggle would end,” Schoenberg wrote.

After much effort, Schoenberg was able to secure safety for the Greissles; during the pre-war years, he strove to achieve similar results for friends and, according to Feisst, “even people he didn’t know.” His relationship with Judaism had always been complicated; the Nazi threat clarified it. Schoenberg spent close to 35 years as a professed Lutheran after converting in 1898, finally converting back to Judaism in 1933. (“I was always a Jew at heart,” he told the Jewish Telegraphic Agency at the time.) As the Nazi influence in Europe grew, so did Schoenberg’s commitment to the faith into which he was born. Starting in 1941 he sought a home for his take on “Kol nidre,” originally composed for the Los Angeles Reform rabbi Jacob Sonderling. The piece struggled to find a home. Sonderling, according to Feisst, assisted Schoenberg with the text for the piece, which, she said, “took liberties and catered specifically to exiled Jews.” “It didn’t resonate very well with a lot of synagogues in the U.S.,” she said.

“Schoenberg’s Correspondence with American Composers” is a dense text, one of nine volumes of Schoenberg’s writings included in the Oxford University Press series “Schoenberg in Words,” of which Feisst is general editor, along with Severine Neff of the University of North Carolina. (Confusingly, “Correspondence with American Composers” is numerically the final book in the series, but the fourth to appear in print.) Of that series, which includes several volumes of Schoenberg’s correspondence as well as his writings on music and composition, Feisst, who was born in Germany, said the American project highlights certain cultural experiences central to understanding Schoenberg’s life.

“Moving to the United States you lose some of your mother tongue,” she said. “Schoenberg wasn’t very good in English when he arrived, and then you see in his letters how his English gradually improved, [but] it’s just filled with Germanisms. And then you read some of his letters in German, and these letters are filled with Anglicisms. In the end I guess you are richer in that you can express yourself in two different languages. But there’s something you lose too.”

For all that may lost in expression, Feisst said, Schoenberg’s letters provide a unique insight into his character.

“He had some interesting hobbies, like book-binding, that come through in letters in this volume,” she said. “The private is mixed with the professional, and you get an impression of a very creative and interdisciplinary mind.” And the letters’ publication can provide a needed corrective to flawed narratives about Schoenberg’s legacy. The American composers who circulated around Schoenberg, Feisst said, including Milton Babbitt (“Correspondences”) and George Perle (“Quintet for Strings”), acted like an “old boy’s club.” But Schoenberg’s most intellectually meaningful relationship with a student, in the end, was with the female composer Dika Newlin, who edited his seminal text “Style and Idea.” While musical circles have tended to avoid acknowledging the strength of that bond, Feisst said, the letters speak for themselves. Over the course of years, Schoenberg and Newlin exchanged “over 150” of them.

In that correspondence it is possible to see much of the working of Schoenberg’s mind, as he fretted over mistaken dates in the first edition of Newlin’s book “Bruckner, Mahler and Schoenberg” — he guessed, viciously and correctly, that she had “collected [them] from unprecise minds like Paul Stefan” — and the duo went back and forth on plans for “Style and Idea.” But it’s also possible to see something of the composer’s heart. Newlin wrote him lengthy, jovial letters, to which he often responded in a few unsentimental paragraphs. But at the moments when his professional façade broke, the wealth of care he had for his favored student is clear. After a two-month silence in the summer of 1947, he wrote her with some questions about her publisher, only veering into the personal at the letter’s end. “How are you?” he wrote. “What are you doing at present?” His questions were brief and restrained, yet he closed with a plea: “Let me hear sometimes again from you and give my most cordial greetings to your parents.”

It’s one example of what Feisst, who has been working on “Schoenberg in Words” for almost 10 years, sees as the value of Schoenberg’s letters, for all that they can appear to document too much of the minutiae of his life. “You get stories by reading through these correspondences that you would never be able to pack into a biography,” she said. “You look at the network. Schoenberg was a brilliant mind, an amazing composer. [But] these composers don’t just drop from the sky; it’s all the interactions that really lead certain people to produce amazing work.”

Correction, February 15, 5:30 pm: A previous version of this article stated that Schoenberg was able to save his son Georg during WWII; Georg survived the war in hiding, but Schoenberg was unable to bring him to the United States. A previous version of this article also stated that Milton Babbitt and George Perle studied with Schoenberg, when in fact they interacted with him professionally but did not study with him.