In Finland, A Yiddish Resurgence 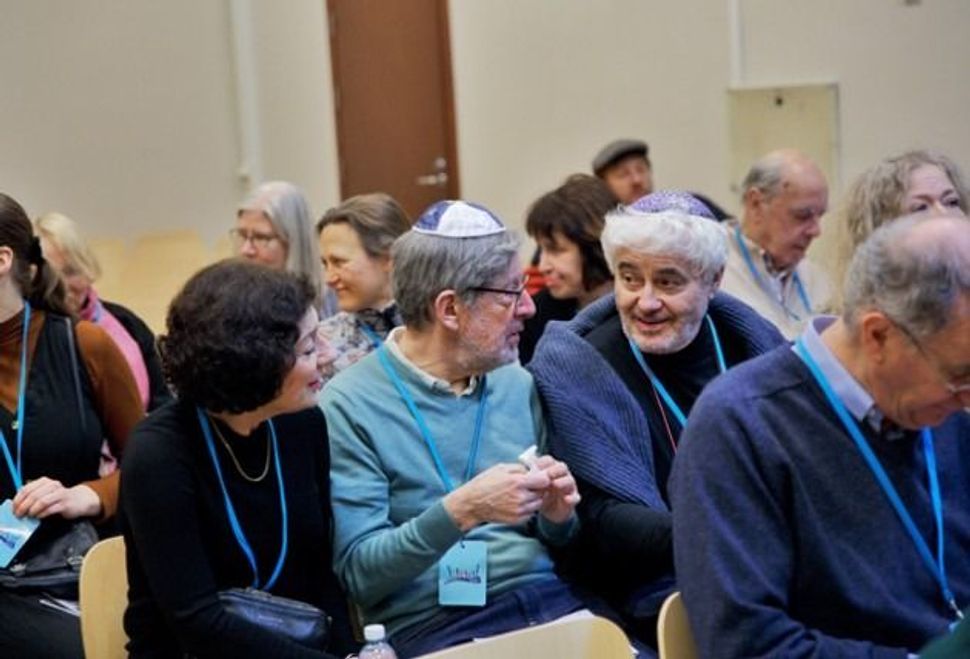 The audience at Limud Helsinki Image by Laura Ben David

Part of my work as Forverts editor is to speak at Jewish conferences, community centers and synagogues about the Forverts and Yiddish culture, which is what brought me to the Finnish capital of Helsinki in early February.

I had been invited to this year’s Limud Conference Helsinki to give three talks about Yiddish. (In Finnish Limud is spelled with one “m” instead of the double “m” spelling used for Limmud in English.) Co-organizer Ariel Nadbornik told me that although most Finnish Jews don’t speak Yiddish they feel a definite connection to the language. “Every time we offer a talk about Yiddish, the room is packed,” he said.

The Jewish community of Finland numbers about 1,500, of whom 1,200 live in Helsinki. The history of the Jews in Finland is fascinating. It begins with the sad story of the Cantonists, Jewish boys who were snatched off the streets of Czarist Russia between the 17th and 19th centuries and conscripted to military institutions for 25 years, with the intention that they adopt Christianity. After being discharged, the Russian authorities permitted them to settle in Finland, where a number of them eventually re-embraced their Jewish roots and built a community.

In the 1920s and 30s, the National Library of Finland became a repository for Yiddish books published in the last decades of the Russian Empire and in the Soviet Union. The Jewish community also had an active Yiddish theater. 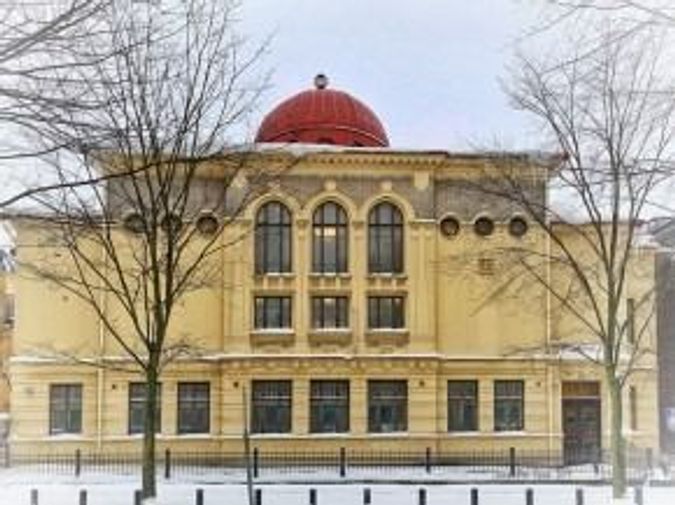 The main synagogue in Helsinki Image by Laura Ben David

At sundown on Friday, February 1, a day before the conference began, my husband and I walked to the Helsinki Jewish Congregation, a large, beautiful synagogue several blocks from the Hotel Helka, where we were staying. The Friday night service took place in a modest space on the second floor called the Club Room. 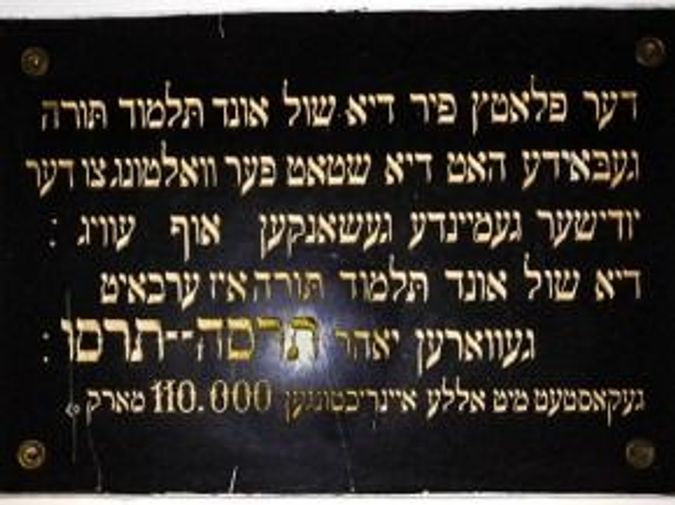 This was the first time I had ever seen a plaque for a building that included the price of constructing it. An adjacent plaque with the same information in Finnish interestingly omitted the last line. Apparently, the detail about the cost of building the shul was meant just for the Jews, likely in order to encourage them to make a donation. Synagogue leaders were probably not keen on having gentiles see that they were asking for money.

The Friday night service had about 25 worshippers, men and women informally separated by a mobile room divider that was removed towards the end of the service when the young shul president, Yaron Nadbornik — Ariel’s Nadbornik twin brother — listed the community announcements. Some of the worshippers that night, I later discovered, had come to Helsinki to lead or attend sessions at Limud.

Although the number of worshippers was modest, the singing of kaboles shabes, the welcoming of the Sabbath, was spirited, and accompanied by skillful harmonizing. Many sang with an Israeli accent, either because they were Israeli-born or because they had studied Jewish subjects from Israelis. Finland is geographically close to Israel — they’re even in the same time zone — so Israelis and Finnish Jews travel back and forth frequently.

After the evening prayers, a vegetarian shabbos meal was served. Most Finnish Jews today, I was informed, are vegetarian or vegan. The dinner attracted about 50 people and many came over to greet me, knowing that I was the editor of the Forverts. Several even spoke Yiddish to me. Joona Hasan, a young tech entrepreneur, married with children, said he read the Forverts online and watched our videos.

The conference, which began immediately after sundown on Saturday night, took place at the Deutsche Schule, a German- and Finnish-speaking elementary and high school. Walking into the classroom of my first presentation, I immediately noticed placards with the grammatical articles die, der and das hanging on the wall. Their linguistic similarity to the Yiddish articles di, der and dos made me feel right at home. 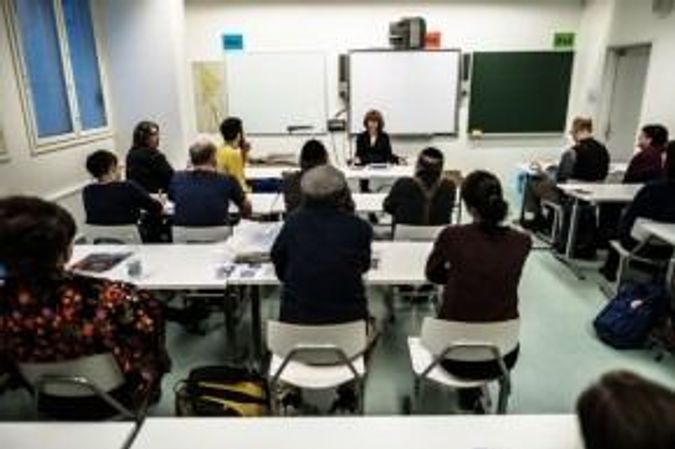 The next morning I had an opportunity to attend sessions led by others. Tamás (Tomi) Buchler, a leader of Hungary’s Jewish community, led a very informative lecture about Territorialism; he described the various attempts by Jews to build settlements, usually with Yiddish as the lingua franca, not only in Uganda — a fairly well-known attempt — but also in Angola, Australia, on Russia’s border with China (called Birobidzhan) and even in the United States. He analyzed the pros and cons of each location and why the experiments ultimately failed. Buchler said it was a shame that the only Jewish settlement people know about today is the one that succeeded, Israel, and know nothing about the heroes of Jewish history who did everything they could to try to save the Jews from Europe’s pogroms and persecution. 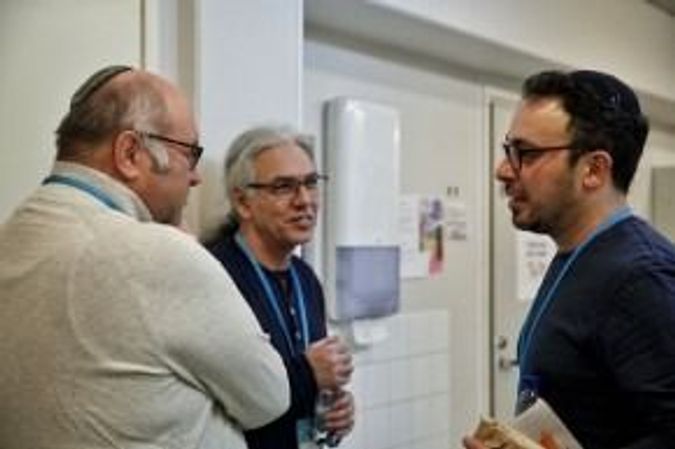 A second session I found fascinating was led by a young man from Kuwait, Mark Halawa, whose father was Palestinian and whose mother was a Jewish convert to Islam. He described the frightening things he had heard about the Jews all his life until he decided to travel to Israel on his own to explore the roots of his maternal side. He ended up learning in a yeshiva, married a Jewish woman and now lives in Jerusalem. I chatted with him afterwards and found him to be surprisingly relaxed considering the emotionally tumultuous journey this must have been for him. And he had a wonderfully dry sense of humor, to boot.

On Sunday afternoon I talked to Limud participants about the transition of the Forverts into a digital-only publication. They listened to the history of the Forverts but directed most of their questions to the paper of today. They were curious as to who the visitors to our website are; what was our political leaning these days, especially concerning the paper’s socialist background; and what was our coverage of Israel like? A lively discussion ensued, heightened by the participants’s wide range of opinions on Israel.

The conference ended with a cabaret-like performance by Ma-s-Ka, a band of two young singers from Estonia, Marika Guralnik and Ekaterina Erlich. Their repertoire includes a number of well-known Yiddish hits like “Bay Mir Bistu Sheyn” and “Sheyn Vi Di Levone.” Their sweet, harmonious voices gave them an unmistakable resemblance to the Barry Sisters, an American Jewish klezmer-Jazz duo of the last century. 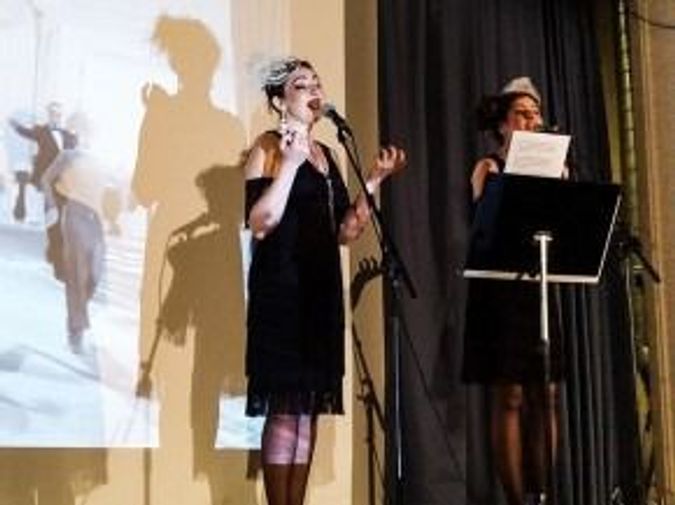 Throughout Limud Conference Helsinki I was struck by the heartfelt interest in and respect for the Yiddish language and culture. This may be a particularly European phenomenon since Yiddish has in the past several decades become a source of pride for many Europeans, Jews as well as non-Jews, who see it as a home-grown treasure.

In Finland, A Yiddish Resurgence