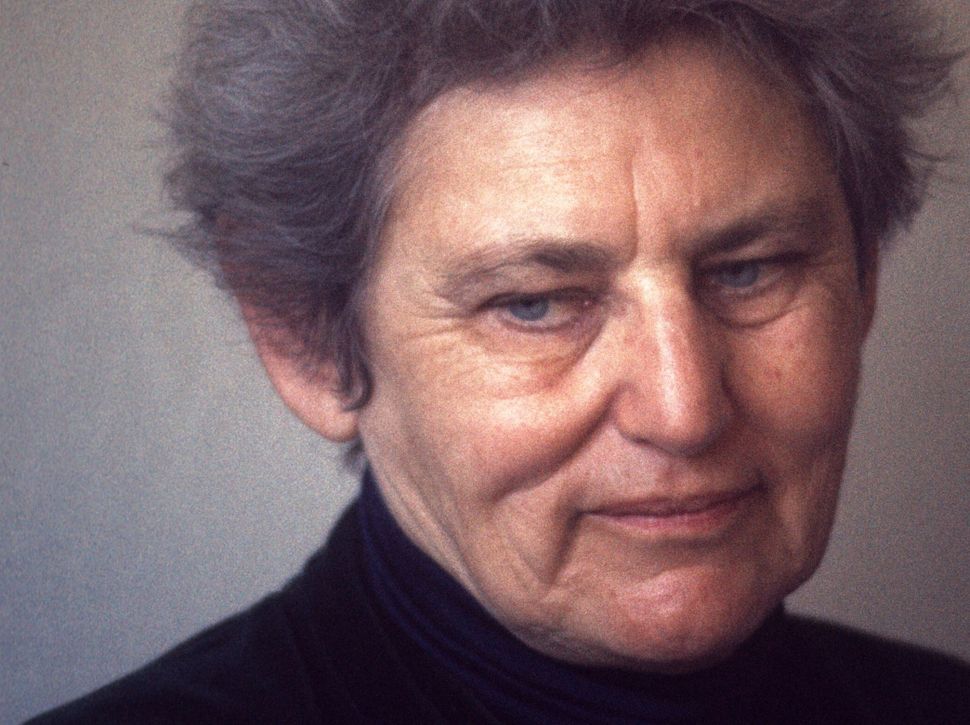 Tillie Olsen can be difficult to read. The content of what she wrote isn’t the issue; her subjects could be grim, yes, but in a way that demands rather than repels attention. But Olsen’s visceral prose — her willingness to adopt a character’s perspective so fully as to surrender lucidity — can be a barrier. The Nebraskan daughter of immigrant Russian Jews, she presented warped and struggling characters just as they are. For readers, the ensuing tangle of language in her writing — most importantly her short story collection “Tell Me a Riddle,” literary treatise “Silences” and novel “Yonnondio” — as an exercise in patience, even as it rewards.

Take the moment in “I Stand Here Ironing,” the first story in “Tell Me a Riddle,” in which a woman describes her early days as an adolescent mother, when she would quickly return from work to see her infant daughter: “I would start running as soon as I got off the streetcar, running up the stairs, the place smelling sour, and awake or asleep to startle awake, when she saw me she would break into a clogged weeping that could not be comforted, a weeping I can hear yet.”

Or the sensory overwhelm that opens the following story, “Hey Sailor, What Ship?”: “The grimy light; the congealing smell of cigarettes that had been smoked long ago and of liquor that had been drunk long ago; the boasting, cursing, wheedling, cringing voices, and the greasy feel of the bar as he gropes for his glass.”

These sentences intimidate. They insist on being heard. But they’re honest about reality, an integrity that was essential to Olsen. Her parents were socialists, and Olsen joined the Young Communists League in 1930, when she was 18. Her affiliation was a matter not of filial obedience but of deeply-held values. In Nebraska and then San Francisco, Olsen was twice jailed for her work as a labor organizer. The occasion for the latter arrest was the San Francisco general strike of 1934; in an essay for The Partisan Review titled “The Strike,” she revived the scene with characteristically dense imagery. “The port dead but for the rat stirring of a few scabs at night,” she wrote, “the port paralyzed, gummed on one side by the thickening scum of prostrate ships, islanded on the other by the river of pickets streaming ceaselessly up and down, a river that sometimes raged into a flood, surging over the wavering shoreline of police, battering into the piers and sucking under the scabs in its angry tides. HELL CAN’T STOP US.”

This was the 30s. History makes predictable the personally devastating result of Olsen’s rage. Olsen was as active in attempting to improve San Francisco’s schools as she was in the fight for worker’s rights, and during the years of Senator Joseph McCarthy’s persecution of alleged communists, one McCarthyite sympathizer accused her of being an “agent of Stalin working to infiltrate the city’s schools through the PTA.” The House Un-American Affairs Committee was aware of Olsen but never charged her with an official offense; it did subpoena her husband, Jack Olsen, who lost his job as a result. As two of her four daughters, Laurie Olsen and Julie Olsen Edwards, would later write in a biographical sketch of their mother, that loss “ushered in years of renewed financial difficulty for the family.”

It was around this time that Olsen began to publish her writing, starting with “I Stand Here Ironing,” which initially appeared in 1956. Olsen carried the lush, sometimes delirious style introduced in that story through all her future work. She remained just as consistent in the unstinting egalitarianism that appeared in both her prose and her politics. But while Olsen saw the world around her to be aswirl in complexity, she also had a remarkable talent for distilling an idea or image to its most essential elements. Her obituary in the Washington Post noted that in her later years, as she walked the streets of San Francisco habitually giving spare dollars to the homeless, she would respond to their grateful “Bless you” by saying “Don’t bless me; curse the system!”

That same clarity of vision, when it comes through in her writing, is bracing. In “Tell me A Riddle,” Olsen transitions from the painful drunken meanderings of “Hey Sailor, What Ship?” to the blissfully well-titled “O Yes.” 12-year-old Carol, who is white, attends her friend Parialee’s baptism at a black church. The space is beautiful and filled with energy. “At the clear window, the crucified Christ embroidered on the starched white curtain leaps in the wind of the sudden singing.” You read and feel the music in your own body. It registers with nearly the same vigor it might in person. The story isn’t as simple as a snatch of grace. With Olsen, it never is. But still, in the moment, you think: oh, yes.