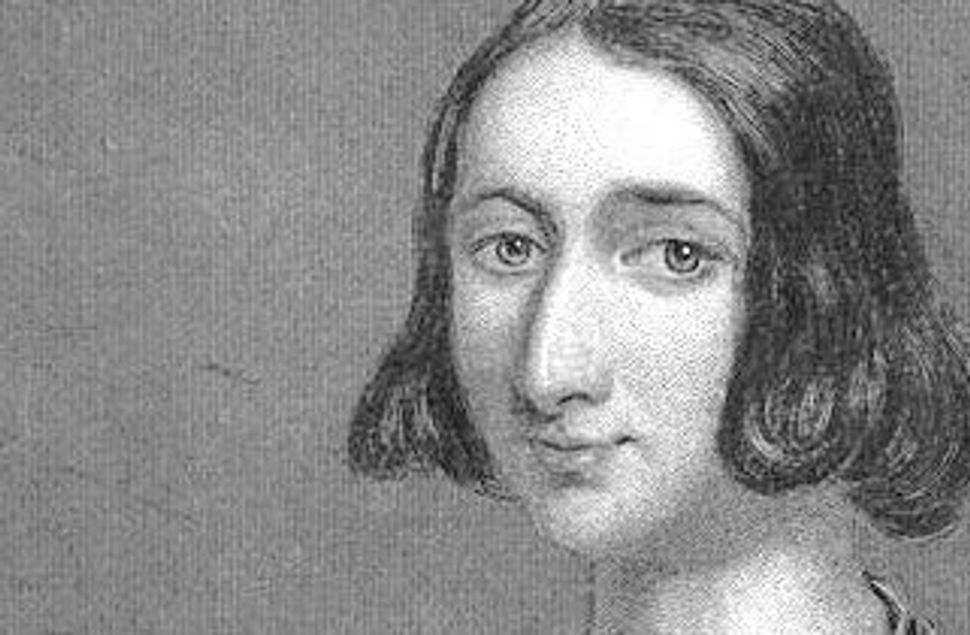 During her short life in 19th-century Britain, around the same time the Brontë sisters found they could only publish their masterly novels under male pseudonyms, Grace Aguilar wrote books with unabashedly feminine titles under her own name. And she gained real literary recognition for them.

There were novels, among them “Woman’s Friendship,” “Home Influence” and “A Mother’s Recompense.” There was “Home Scenes and Heart Studies,” a collection of short stories and, somewhat incongruously, midrashim. There was “Women of Israel,” a three-volume compilation of biographies of significant Jewish women that was considered to be Aguilar’s masterpiece, and appears to have been profitable enough to allow her to relocate her entire family. In 2019, it is still hard to be taken seriously in intellectual circles as a writer of what is dismissively labeled women’s literature. During the decade or so in which Aguilar published before her untimely death in 1847 — she was 31 years old — it was much, much harder.

That applied within the Jewish community, as well as outside of it. Aguilar, born to a Portuguese Jewish family in a suburb of London in 1816, was chronically ill, subject to a number of debilitating ailments from her earliest years. Her first publication of note was “The Spirit of Judaism” (1842), which argued for a remarkably progressive application of the spiritual and moral intent of Judaism: Away with the mehizah, equal religious education for girls and boys, prayers in English instead of Hebrew. Aguilar’s ideas flouted those of the religious establishment, so much so that the American rabbi who published the book, Isaac Leeser, laid out his primary theological arguments with its author in his introduction. (First among those arguments, Leeser wrote, had to do with Aguilar’s “seeming aversion to the tradition.”) But “The Spirit of Judaism” was remarkable not just for its progressivism, but also for its intended audience. Aguilar prefaced the book with the stipulation that “To the mothers and daughters in Israel its pages are more particularly addressed, for to them is more especially entrusted the regeneration of Israel.”

Yes, the role of women that Aguilar envisioned was often defined in relation to men. “The important influence of women,” she wrote, largely resulted from the fact that “to them, and them only, are the earliest years of man committed.” But even that framing didn’t detract from the radicalism of her mission. As Michael Galchinsky wrote in an introduction to “Grace Aguilar: Selected Writings” (2003), Aguilar “adapted the traditionally Jewish male genres of theology, prayer, sermon, and meditation to women’s spiritual experience.”

“Aguilar sought to give Jewish women a proud identity,” Galchinsky wrote. “Her accounts of biblical and historical Jewish women in ‘The Women of Israel,’ combined with her occasional lyrics and domestic fictions… argued for changes in what women and girls could learn and how they could learn it.”

Much of Aguilar’s work was published after her death by her mother, Sarah. Her rare popularity, in and out of the Jewish world, and her even more rare success writing under her own name, was in part a consequence of the particular religious and cultural environment into which she was born. The first half of the 19th century saw a surge of Christian interest in converting Jews, and Aguilar’s work struck a savvy balance between advocating for independent Jewish life and faith and suggesting that the two religions might have more common ground than had, historically, been assumed. In her fiction, heroines were regularly faced with the question of whether they ought to enter a desirable marriage that would require them to convert; they always decided against doing so. Aguilar, in showing women rejecting such marriages, wrote directly against the literary grain of her time. Authors from Walter Scott, in “Ivanhoe,” to M.G. Lewis, in “The Jewish Maiden,” had developed a fondness for plots in which alluring young Jewish women surrender their religion for love.

But in her theological and historical work, Aguilar was unusually open to discourse with Christianity. She credited her Christian contemporaries in Britain with creating an environment that was, in Europe, unusually accepting of Jews. In “The Spirit of Judaism,” she was frank about that appreciation: “The feelings I have had good reason to entertain towards the Christian,” she wrote, “are amongst the many blessings which I trace from the hand of my God.” While her position would later become somewhat less softhearted — in “Jewish Faith” and the essay “The History of the Jews in England,” she would take a strong stance against conversion and full assimilation — her perceived interest in connecting Jews and Christians appealed to a Christian populace for whom Jews were alternately subjects of exotic fascination and desired conversion.

One could imagine that such a stance might have alienated Aguilar from her own Jewish community. It didn’t. As Galchinsky wrote for the Jewish Women’s Archive, Aguilar’s early death was mourned “on the front pages of Jewish newspapers in England and the United States.” Her work had reached far, and in its expansive, compassionate view of what Judaism could be for its practitioners, touched hearts. At the end of “The Women of Israel,” the measured advocacy for her gender that had marked Aguilar’s preface to “The Spirit of Judaism” was replaced by a wild joy: “And if we are daughters and sisters, wives and mothers, of a people so beloved, oh! what does not devolve on us to forward and proclaim the glory, and the mercy, and the wisdom, and the love of Israel’s Almighty God!”