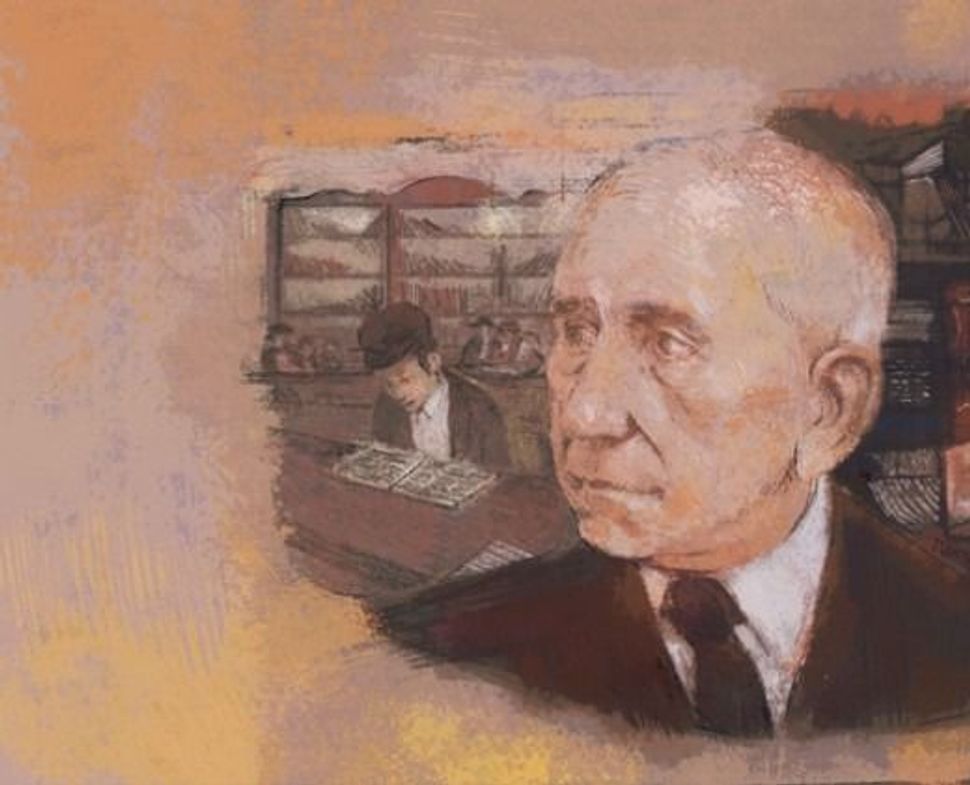 Harold Rabinowitz likes to say that when he pulled into the driveway at the Beacon Inn in Brookline, Massachusetts, his life became like “something from the movies.”

It was winter 1979. Rabinowitz, or Heshie, as he calls himself, was a pulpit rabbi in nearby Malden and a teacher at the modern orthodox Maimonides School in Brookline.

“Getting back to Malden — 45 minutes north of Brookline — to daven mincha was a challenge on a short winter’s day,” Rabinowitz, now 70, said in a phone conversation with the Forverts, referring to his daily appointment at Congregation Beth Israel for evening prayers. “One particular afternoon I didn’t think I could make it home in time. I pulled up to the Beacon Inn and used the lobby pay phone to call Mordechai, my shamus. I said, ‘Listen, if you have to daven mincha, daven mincha. Vart nisht awf mir.’ Don’t wait for me.”

As soon as Rabinowitz put the receiver back in its cradle, an elderly man beckoned to him.

“He said, ‘I’ve got a problem and maybe you can help me,’” Rabinowitz said.

The man did not identify himself, and Rabinowitz did not recognize him. “He told me he was giving a lecture on Chaim Nahman Bialik in Yiddish at Zionist House in Boston, but forgot to bring along an English translation,” Rabinowitz said. “He overheard my bit of Yiddish with Mordechai and asked if I could do a translation.”

It took Rabinowitz half an hour and seven pages of Beacon Inn stationery to write out a translation. The lecturer thanked Rabinowitz and offered to pay him.

“I said, ‘Nope, not a penny,’ but I was interested in knowing how the lecture went.”

The man took Rabinowitz’s phone number and promised to call. “All I could think was, ‘I’ll never make it back to Malden in time for mincha now,’” Rabinowitz said.

The next day he got a phone call: “Do redt Chaim Grade,” the voice said. Chaim Grade speaking.

Rabinowitz had unwittingly translated a lecture by the author of several acclaimed post-Holocaust novels, including “The Agunah” (“Di Agune,” 1961) and the two-volume “The Yeshiva” (“Tsemakh Atlas”), published in 1967 and 1968. Grade, speaking in Yiddish, told Rabinowitz that he was calling to tell him how the lecture went.

Rabinowitz ultimately learned that the English translation of Grade’s lecture on Bialik that the author claimed to have “forgotten” was actually upstairs in a Beacon Inn room, held hostage by Inna Hecker, Grade’s famously mercurial wife.

“Minutes before my first encounter with Grade, he and Inna had an argument, and she got back at him by withholding the translation,” Rabinowitz said. “As I became better acquainted with the Grades, I saw this dynamic repeated over and over again. It was standard operating procedure.”

A three-way partnership is born

Rabinowitz had already read much of Grade’s Yiddish oeuvre, and he had been disappointed by some of the translations. “The English version of ‘The Yeshiva’ more often evoked Brooklyn than Vilna,” he said. 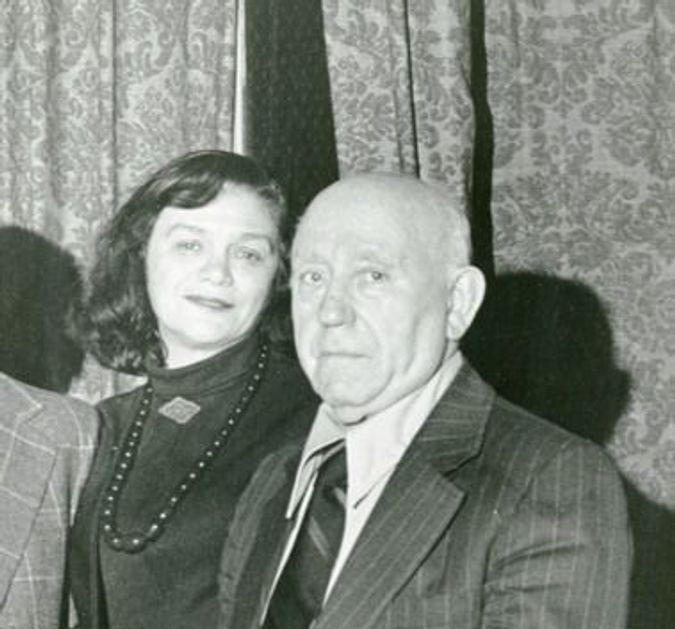 Chaim and Inna Grade Image by Courtesy of YIVO

Grade was of the same mind. He asked Rabinowitz to meet him in Manhattan at Knopf, Grade’s publisher, in the Random House building, at that time on 50th Street and Third Avenue. Together they would speak with Grade’s American editor.

Rabinowitz arrived just as Grade and Hecker came out of the lobby to greet him.

“I had never seen Inna before, and I have to say she was a very comely woman,” Rabinowitz recalled some forty years later. “She and Chaim struck me as an incongruous couple. He was a short, bald, squat chain-smoker, and she looked like a movie star.”

“Unbeknownst to me, Gordon was vetting me,” Rabinowitz said. “In due course, he nodded at Chaim and said, ‘Okay.’ I was now the official translator of Chaim Grade’s “Di Kloyz un di Gas.” It was a collection of three novellas, and it didn’t yet have an English title.”

“For me to walk into Knopf was the same as me walking into the White House,” Rabinowitz said. “Imagine my shock when I learned that Cynthia Ozick was reviewing my translation.”

Rabinowitz worked on that translation during a year of great personal turmoil. For one, he had to officiate at the funerals of numerous Beth Israel congregants. (In his ten years as the shul’s pulpit rabbi, some three hundred congregants died; thanks to a legal investigation, the residents of Malden and other Boston suburbs learned that a tannery had contaminated the local aquifer. “That helped explain why my congregants were getting cancers left and right,” Rabinowitz said.)

The deaths of friends and congregants took its toll on Rabinowitz. But this wasn’t the only distress he experienced. By 1981, when he had completed several chapters of “Di Kloyz un di Gas” — now “Rabbis and Wives” — Rabinowitz had left his pulpit, teaching job and marriage, and struck out for a career in publishing. “Not a popular move with my parents, who believed the life of a writer and editor was synonymous with poverty,” Rabinowitz said. He moved to New York and spent four days a week working on the manuscript with Grade.

“Inna understood Yiddish but couldn’t read it,” Rabinowitz said. “Nonetheless, she would sit with us and discuss the translation. Her command of English was better than Chaim’s.”

The process was slow, largely because of difficulties associated with finding appropriate words for Yiddish colloquialisms.

“For example, I remember the three of us sitting in the Grades’ Bronx apartment, arguing over my use of the phrase ‘a Robin Hood,’” Rabinowitz said. “Because Robin Hood is not a character in European Jewish folklore, Chaim was not comfortable with letting me use it. I don’t remember the Yiddish phrase or the English that we finally ended up using, but the overall result, sadly, was an overly formal English without the resonance of colloquial speech.’

Toward the end of the review process, Grade asked Rabinowitz if he would name Hecker his co-translator. Rabinowitz consented to share credit.

Christmas with the Grades

Rabinowitz’s most challenging interaction with the Grades came when Hecker put up a Christmas tree to honor her Christian father’s heritage. One day after the tree was up and trimmed, Hecker complimented Rabinowitz, attired in his habitual shirt, tie and jacket, for dressing nicely on the day a reporter from The Yiddish Daily Forward was coming to interview her husband.

As if on cue, the front door buzzer rang. Rabinowitz shot out of the Grades’ second-floor apartment and ran down the stairs. He got to street level in time to intercept the reporter. “‘I’m sorry,’” he said he told her, “‘but Mr. Grade is not feeling well.’”

Rabinowitz maintains that Hecker intentionally scheduled the Forverts interview at Christmastime. “The wife of one of the world’s greatest Yiddish writers had an outright hostility to the Yiddish-speaking world,” he said. “I could hear her yelling through the intercom, ‘Rabinowitz, ikh’l dir derlangen a messer in kop!’ [Rabinowitz, I’m going to stick a knife in your head!]”

He prevented the reporter from entering the building and waited until she drove away.

“Chaim Grade’s career would have been finished if the reporter wrote that Chaim, a former student of the Ḥazon Ish — a prominent talmudic authority — had a Christmas tree in his apartment,” Rabinowitz said. “All well and good that Inna insisted on a tree, but it was career suicide for Chaim if his core readership knew about it.”

Rabinowitz argues that Hecker had a perverse desire to undermine her husband’s reputation in the Yiddish-speaking world. “There’s no question about it,” he said. “She knew what she was doing.”

Yet Rabinowitz has only one word for the bond between Grade and Hecker.

“Love,” he said. “It sounds crazy, but they were very loving to each other. I’ve often admired them.”

Shortly before Grade died in 1982, “Rabbis and Wives” was nominated for the Pulitzer Prize for fiction. He and Rabinowitz were flattered that the book was named first runner-up.

“Inna, however, was livid,” Rabinowitz said. “‘First runner-up!’ she complained. ‘The nerve! What book won the prize?’”

It was “The Color Purple” by Alice Walker. Rabinowitz and Grade got hold of the book at the Barnes and Noble on 18th and Fifth. “After we leafed through it in the bookstore, Chaim said to me, ‘It is no shame to come in second to this book.’ Inna, however, was outside on the street, yelling into a pay phone at one of the Grades’ lawyers. She wanted Walker’s novel disqualified on grounds that it was copyrighted in the previous year.”

In Rabinowitz’s view, as well as that of many others, Hecker remained the greatest obstacle to a wider appreciation of Grade’s work. For years she put all her hopes into the film version of “My Quarrel with Hersh Rasseyner,” one of Grade’s first short stories. “It was a small movie and it had no impact,” Rabinowitz said.

Grade died in 1982 and Hecker in 2010. In her 28 years as Grade’s widow, Hecker kept in touch with Rabinowitz. And time and again she derided a philistine publishing industry that did not appreciate the literary genius of her husband.

Barbara Finkelstein is a regular contributor to the Forverts