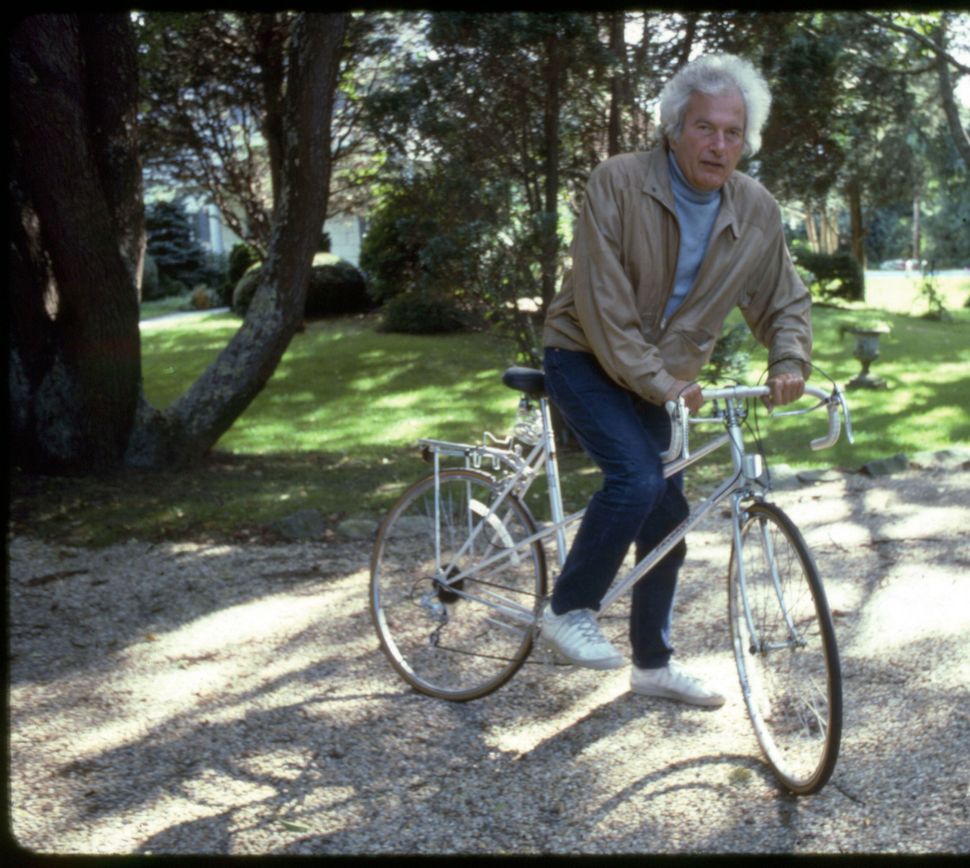 When Mike Nichols directed the 1970 film adaptation of the novel, he cast fellow Yid Alan Arkin as the lead character, Captain John Yossarian, a defiant air force officer who tries to end his flying days by convincing his superiors that he’s insane. In 1973, none other than Richard Dreyfuss was pegged for the part for an unreleased TV series. Now, there’s a new television adaptation of the novel, premiering on Hulu May 17, developed by the decidedly un-Jewish George Clooney and starring Christopher Abbott. But there’s no need to sit shiva for Yossarian’s Jew cred. Indeed, there is a growing mountain of evidence to suggest the real-life inspiration for Yossarian was a Jewish nosecone pilot from Brooklyn named Julius Fish.

The effort to claim Yossarian for the Jews is being led by Fish’s grandson Jonathan Fish, whose detective work writer Brian Birnbaum described in a May 16 piece for LitHub. Fish served in with Heller during World War II, when both were deployed with the 340th bombardment group in Corsica, an outfit and location that informed Heller’s novel. Fish, though apparently reticent to talk about the war in detail, would occasionally speak to family and friends about his connection with Heller.

And when Fish died in 2011, his old comrades informed Jonathan Fish that his grandfather’s wartime activities played a significant part in Heller’s creation of Yossarian.

Jonathan Fish found significant evidence to this effect in a box kept in Fish’s attic, which contained a journal in which Fish logged each day’s missions, targets, casualties and the weather during his deployment. Also inside were medals, correspondence and photographs of Heller and Fish together.

Using Daniel Setzer’s paper “Historical Sources for the Events in Joseph Heller’s Novel, ‘Catch-22,’” Fish’s war journal and Heller’s organizational chart for ”Catch-22,” recorded in an appendix to the novel, Fish was able to track consistent parallels between his grandfather’s flight record and that of Yossarian. At the Heller Archive at Brandeis University, Jonathan Fish found a copy of a photo showing Fish, Heller and Lt. Francis Yohannan (whom Heller insisted was only the inspiration for Yossarian’s name) together at a campsite. The box from the attic contained the original photo.

Fish also presented his work to Jonathan Eller, an English professor at Indiana University-Purdue University Indianapolis, who edited the appendix materials to the 50th anniversary edition of “Catch-22” and has written extensively on Heller’s process in piecing together the novel. Eller’s response was more than encouraging:

“I think your evidence is overwhelming; your grandfather was clearly the principal inspiration for Yossarian’s narrative adventure, and his reaction to the trauma of unrelieved aerial combat,” Eller wrote, as quoted by Birnbaum. “I’m grateful for your work to preserve these new treasures.”

Among the evidence Jonathan Fish cited is the fact that both Fish and the fictional Yossarian persistently targeted the Ferrara Bridge in Ferrara, Italy — a key crossing for Axis supplies. The Air Force presented both Fish and Yossarian with a Distinguished Flying Cross for their attacks on the bridge.

But perhaps the most compelling find in the younger Fish’s research is a letter from an army doctor named Benjamin Marino, whom Heller identified as the inspiration for the book’s Doc Daneeka. (It’s Daneeka who introduces the book’s trademark “catch,” which is that a crazy airman who requests not to fly additional missions could be grounded, but that in asking, that airman proves he’s in fact sane for wanting out of combat and must fly more missions.)

The letter, viewable on Fish’s blog, diagnoses Fish with “an aero-anxiety state as the result of internal conflicts between self-preservation and combat strain, as manifested by signs and symptoms such as irritability” and deems him “an unsuitable candidate for flights over enemy territory.” This hint at the state of Fish’s psychology might solve the mystery as to how Heller came to understand Yossarian’s psyche. Heller was careful to distance himself from that mindset, telling a crowd at the Young Men’s Hebrew Association in 1970 that “Yossarian’s emotions, Yossarian’s reaction to the war in the squadron were not those I experienced when I was overseas.”

But apart from establishing a strong case that Fish inspired Yossarian, Jonathan Fish’s research reveals that his grandfather and Heller shared a closeness due in no small part to a shared sense of culture.

“We were all friends,” Birnbaum reports that Fish told his family, “the Jews stuck together… You were either from Texas or from Brooklyn.”