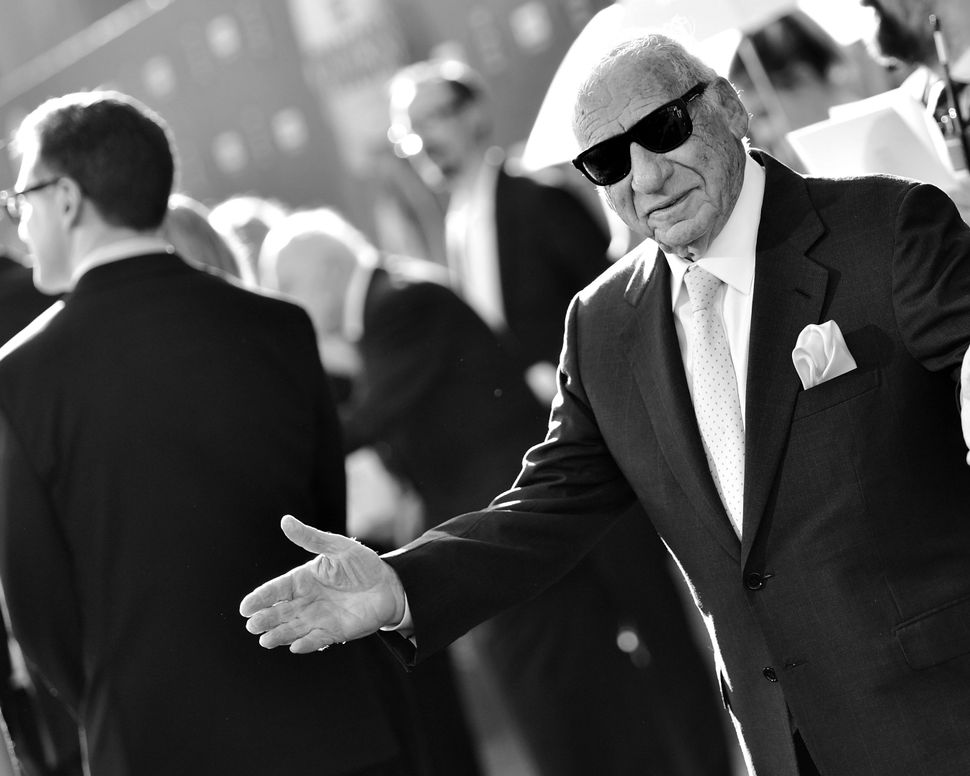 At 93, Mel Brooks is a lot of things: A Kennedy Center award recipient, a titan of both stage and screen even a vampire grandfather in t “Hotel Transylvania 3,” but for all these distinctions he reduces himself to one thing. “I’m just a Jew comic,” he told David Denby in a profile published in the Atlantic last year. As they say, there’s truth in comedy.

Brooks is still Melvin Kaminsky from Brooklyn, cracking wise to neighbors on the corner. It’s precisely his Jewish point of view, with its uncanny ability to infiltrate mainstream culture, that makes him the talent that he is. That, and a penchant for lampooning movies and musicals and making his co-religionists cringe with his lavishly choreographed takes on the darker spots of our history. See: Goosestepping kicklines in “The Producers” and Busby Berkeley-style auto da fés in “History of the World: Part 1.”

“His view of life is essentially pessimistic, though he has the startling and reviving habit of springing laughter out of calamity,” Denby wrote. Brooks is a master at mining humor that dances around the brink of disaster. Who can forget the hilarity of Gene Wilder’s Doctor Frankenstein plunging a sharp scalpel into his thigh? It holds true to Brooks’ formula “if I’ll cut my finger, that’s tragedy… Comedy is if you walk into an open sewer and die.”

This humor, gallows and otherwise, propels a worldview evident in even Brooks’s earliest work. Around the time Brooks began his career in the 1950s on Sid Caesar’s “Your Show of Shows,” American Jews entered a new age of assimilation. Yet older Jews were still around, providing a useful point of reference for what is perhaps Brooks’ greatest creation, “The 2,000 Year Old Man.”

“The 2,000-Year-Old Man, by means of his fabulous endurance, forever faces something new and dangerous, using desperation and wit to survive. He is Jewish survival, the immigrant experience repeated over and over,” Denby writes.

It makes sense that Brooks, who grew up in prewar Williamsburg around immigrants from the old country, lent the voice of the man who experienced all of modern human history a complaining Yiddish cadence. “Half the people in the neighborhood ONLY spoke Yiddish,” Brooks wrote to Denby. “It was called Mamaloshen, mother tongue, a connection to heritage and family. It’s a shame to lose those rhythms.”

Whether Brooks knows it or not, he was integral in keeping those rhythms going, to the point where any faux-Yiddish accent can now pass for a credible Mel Brooks impression. Many of the old mamaloshen speakers have disappeared, but Brooks continued to call on their memory, channeling the past through the voices of characters like Yogurt in “Space Balls,” who sagely reminds us all to “use the Schwartz.”

Brooks is still revisiting old material — his most recent endeavor was a revised version of his 2007 musical adaptation of his 1974 film “Young Frankenstein” for the West End — and he sticks to his routines. Denby reports that in the age of word processors, Brooks writes every day on unlined paper. As for kinship, he sees his old friend Carl Reiner, his collaborator on “The 2,000-Year-Old Man” almost every evening.

Perhaps the most interesting thing about Brooks in old age is how little he has changed from the outlook of his youth. It’s only natural that the young man who played an ancient one would seem youthful in his own old age. Mel Brooks is both an old and a young soul. May that soul stay with us for 2,093 more years. Happy Birthday, Melvin!