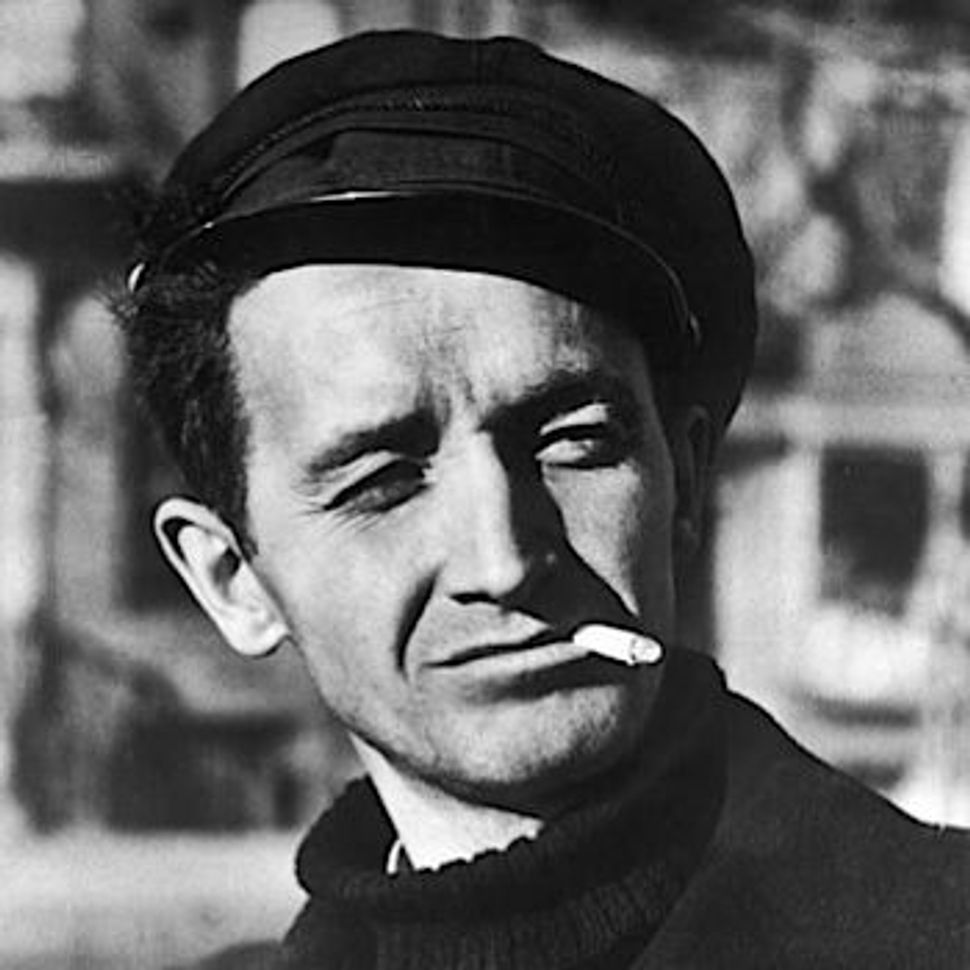 Roll on, Woody: Guthrie, circa 1960. Image by getty images

Editor’s Note: Woody Guthrie would have turned 110 today. To honor the legendary songwriter, we look back on his little-known history as a writer of Hanukkah songs.

For 20 years, I was a pop music critic. Every year as the calendar wound down, here came one of music journalism’s over-roasted chestnuts: the annual roundup of new Christmas albums. I never groaned. I’m one of those Christmas music people. As soon as the Thanksgiving turkey is down my gullet, I’m trotting out the tinseled tunes. And each year, somehow, the same old songs are rechristened, rearranged, repackaged anew. It’s the big catalog that could. It’s the lamp that you’d think should have burned out a long time ago.

Likewise, each year I make a holiday music mixtape (sigh, it’s a playlist now) for friends and family. Again, I keep worrying the well will run dry, that a new generation of young indie rockers couldn’t possibly have an interest in filling us up with more fa-la-la-la fluff, and each year I’m amazed at the sheer regenerative power of all that holiday hegemony.

Of course, I’ve tried to include the occasional Hanukkah song. All these years along and I’m still asking — any suggestions?

There are some handsome pop renditions of “Ma’oz Tzur” (Marc Cohn, Ben Kweller), and Beck’s funked-out “The Little Drum Machine Boy” is a wonderfully wacky celebration of being a “Hanukkah pimp.” (I’ve never been able to bring myself to include comedian Adam Sandler’s sophomoric ode to the eight days.) But countless Jewish songwriters have bedecked the halls with Christmas classics — “White Christmas,” “The Christmas Song,” “Let It Snow,” “Sleigh Ride,” on and on — meanwhile, no real Hanukkah hits? Not even in the ’60s from swingin’ Tikva Records?

An unlikely songwriter once tried to change that. A fellow Okie, no less. He wasn’t successful, either, but the rediscovered trove of his Hanukkah hootenannies — polished nicely by acclaimed klezmer band the Klezmatics for the album “Happy Joyous Hanukkah” — remains a bright light for the season’s celebration.

Woody Guthrie blew into New York City in February 1940 and literally knocked the dust off his shoes. Guthrie was not just a native of Oklahoma, he’d come to symbolize the plight of all “Okies,” an initially pejorative term that tagged Dust Bowl migrants from any state. Set adrift as his family fell apart, Guthrie set out alone from Okemah, Oklahoma, as a teen, got married in Pampa, Texas, and stayed put a short while in the early ’30s. He then succumbed to the allure of the road as he watched boxcar after boxcar of desperate, destitute farm families roll through town on their way out west to a different kind of promised land.

He spent the next few years hitching on highways and riding on rails. During these travels, at first passing time by idly strumming his guitar, Guthrie learned that music was more than an escape; it was a conduit of cultures. His first biographer, Joe Klein, wrote of the epiphany in “Woody Guthrie: A Life”:

“The whiny old ballads his mother had taught him were a bond that all country people shared; and now, for the migrants, the songs were all that was left of the land. Singing for these people was a totally different experience from playing a barn dance with the Corncob Trio. It wasn’t just entertainment; he was performing their past.”

Guthrie would channel these empathies from many cultures he encountered, but this first transformation was significant: Guthrie ceased being a mere Okie and became a citizen of the world.

He took that new insight to the airwaves in his first radio gig in Los Angeles — performing those folk songs on a daily show and honing what became a carefully crafted persona as a wise but feisty hillbilly — before taking off for New York. Guthrie would forever ramble about the country, but the man we know as the quintessential Okie boy was based in the five boroughs of New York for the majority of his life, and much of that was in Coney Island.

Guthrie took right away to the colorful culture of bustling Coney Island in the ’40s. As Vivien Goldman writes in the liner notes to “Wonder Wheel” — the other album of (non-Hanukkah) Guthrie lyrics by the Klezmatics — Woody would take his daughter on “morning walks down the boardwalk to have breakfast at Nathan’s… The affable fruit peddler tossed her a plum as she passed, and greetings were exchanged with the owner of the corner store, whose phone was used by the whole neighborhood. It was all enchanting to Woody — the old men playing chess and arguing in Yiddish, the Jewish meydeles splashing in the chilly waves.” 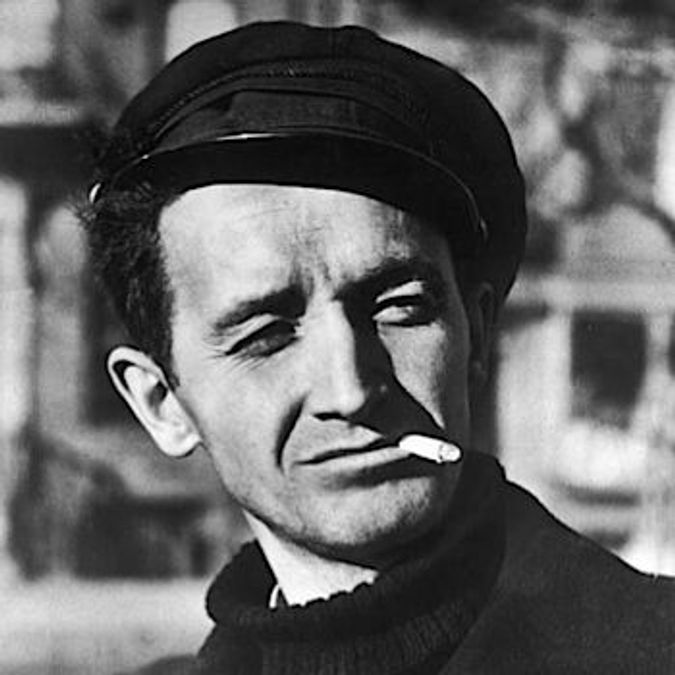 Roll on, Woody: Guthrie, circa 1960. Image by getty images

Settled here for a time (or as settled as a rambler like Guthrie could get) in the mid-’40s, Guthrie began doing what he could never stop himself from doing: writing songs about everything around him. With kids appearing at his feet, he began writing songs for them (“Take me riding in the car, car…”). Off the road, he turned to the newspapers for topical inspiration, producing a whole album of songs about Sacco and Vanzetti. He’d married into a Jewish family, so songs about Jewish culture began coming, too, such as “The Many and The Few” (a whopping 20 historical verses, ending with “Eight candles we’ll burn and a Ninth one too/ Every New Year that comes and goes/ We’ll think of the many in the hands of the few/ And thank God we are seeds of the Jews”) and an adaptation of the Carter Family’s “Little Moses.”

The Klezmatics’ Lorin Sklamberg, in preparation for recording the band’s renditions of Guthrie’s songs, recalls picking through “not just Hanukkah songs but songs about the cultural life in Coney Island, anti-fascism things, other stuff.” In an interview with me when “Wonder Wheel” was released, Sklamberg, himself a sound archivist at New York’s YIVO Institute for Jewish Research, said, “One song I was interested in was called ‘Headdy Down,’ a lullaby for Arlo and the other brother Joady. It has these Yiddishisms in the song that are really cool. You don’t expect to see Yiddishized words in a Woody Guthrie song, but there they were.”

Joady becomes, in the song, “Jodulah.” “Lay your head down,” the song goes, “Keppy down, Kepula.”

Guthrie knew the sounds and rhythms of Jewish life before reaching Coney Island. The man probably most responsible for activating Guthrie as a political person was Ed Robbin, a Jewish editor at The People’s World newspaper in L.A. Guthrie’s manager was Harold Leventhal, born to Orthodox immigrants. Moe Asch, who besides Alan Lomax was the chief folklorist to capture Guthrie on record, specialized in Jewish liturgical music before Guthrie bounded into his life.

Then there was his mother-in-law. Guthrie’s second wife was Marjorie Mazia, daughter of Yiddish poet Aliza Greenblatt. The matriarch of a learned family, Greenblatt must have been mystified by her daughter’s scruffy find, but Klein says the two poets “hit it off rather well.” As a folk songwriter, Guthrie rarely wrote his own tunes, preferring to knit his words into existing melodies people already knew. He allegedly bonded with Greenblatt over lunch, discovering that she, too, had applied her own words (“Du, Du”) to an older Palestinian tune.

“Most people think he’s the Dust Bowl balladeer, and his songs have this color associated with them — everything in sepia,” Sklamberg said. “It makes me think of how Jews have been represented in films. From ‘Yentl’ to ‘A Stranger Among Us’ and ‘The Chosen,’ Jews are always lit with this eerie, brownish, golden glow. A friend of mine talked about how every time she opens a book in ‘Yentl’ 10,000 watts of light comes out… These songs of Woody’s are more Technicolor.”

“Jewish to us meant eating!” Nora Guthrie, Woody’s daughter, told me in 2006. “Friday night Sabbath, home-cooked dinners at Bubbie’s, their nickname for grandma Greenblatt, with blintzes, latkes, sweet and sour meatballs, herring, matzoh… So we knew about the food, the holidays. We celebrated Hanukkah with the ‘Hanukkah fairy,’ which my parents made up. She went around with Santa delivering the presents. We would leave a large plate of cookies and milk for Santa, and a teeny-tiny little plate with a cookie for the Hanukkah fairy… and we had a Hanukkah Tree, aka, a Christmas tree.”

The Hanukkah songs came next. Lots of them: “Hanuka Bell,” “Hanuka Dance,” “Hanuka Gelt,” “Hanuka Tree,” “Hanuka’s Flame,” “Happy Joyous Hanuka,” “Honeyky Kanuka,” “(Do the) Latke Flip-Flip,” “Spin Dreydl Spin.” Guthrie wrote them naturally around the house but also with a mission in mind: to counter the Christmas glut.

Guthrie’s response was “The Ballad of Chanukah.” Asch comments, “he got the complete story of Chanukah — with the candles and the Maccabees and everything else — and he sang it in terms of an American legend.”