Remembering Else Ury, Famed Children’s Writer And Victim Of The Holocaust 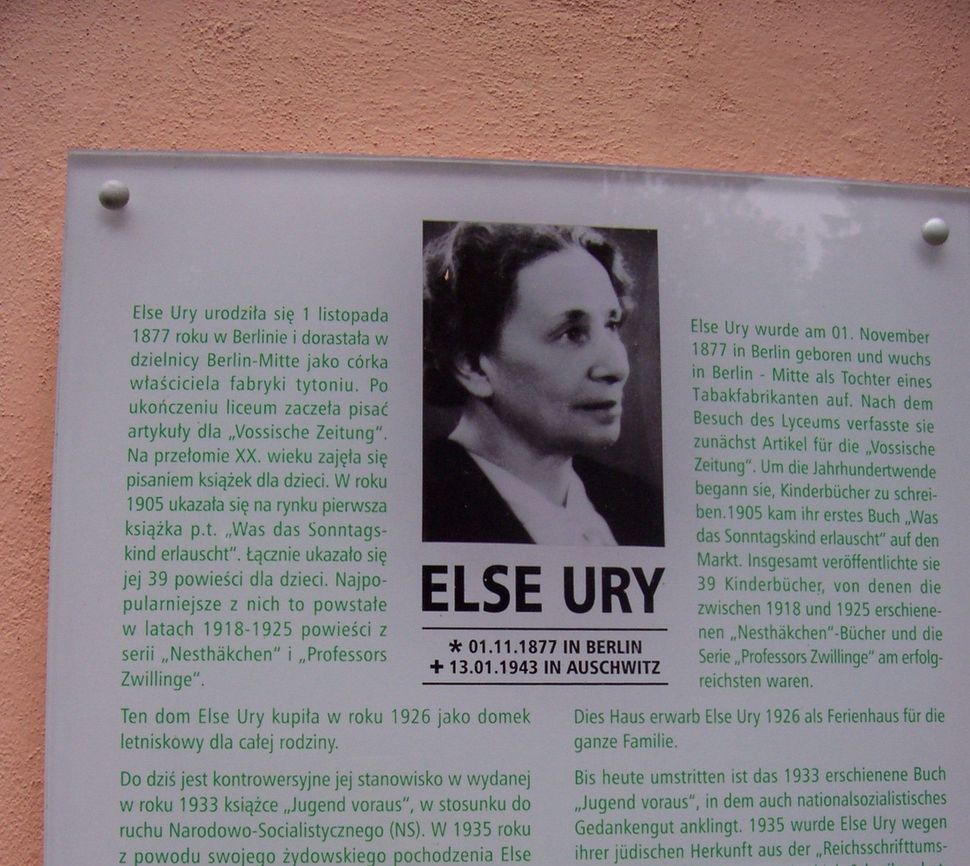 Among the books outlawed by the Nazis were the widely-read children’s books of Else Ury. The Third Reich ended Ury’s career as part of their purge of “degenerate” art, and within seven years of that censorship she was killed at Auschwitz. But Ury’s beloved character Annemarie Braun, known as “Nesthäkchen,” a blonde-haired, blue-eyed young woman who defies her doctor father to pursue an education, left an impression on generations of readers who held onto Ury’s books long after her death.

Ury was Jewish; under the Third Reich, she was ousted from literary society and barred from publishing in 1935. As a recent obituary from The New York Times’s “Overlooked” series notes, Ury’s fate was largely unknown until the end of the 20th century, even as her books were republished and made into a popular 1983 television series. In 1992, Marianne Brentze’s German-language biography of Ury, “Nesthäkchen Arrives in the Concentration Camp,” shed light on her history, but the exact nature and date of her death were unknown until three years after that book was published. Evidence materialized in 1995, when a group of German high school girls visiting Auschwitz noticed a brown leather suitcase painted with her name.

Showing a drive equal to that of Nesthäkchen, the young women checked the name and address on the suitcase against deportation lists and wrote a school report about their findings. Their work made national news when their teacher notified the press that Ury died at Auschwitz on January 13, 1943, at the age of 65, after being sent to the gas chamber immediately upon her arrival.

Ury’s story gained further attention in 1997, when the House of the Wannsee Conference – the building where Nazi officials planned the death camps – presented her valise as part of an exhibition on her life.

Ury was born Johana Else Ury on November 1, 1877 in Berlin. Her father, Emil Ury, the son of Levin Elias Ury, the director of the Synagogue in the Heidereutergasse in central Berlin, earned a comfortable living as a tobacco factory owner. Her mother, Franziska Ury, née Schlesinger, imparted a love of art and literature and an emphasis on education to Ury and her three siblings. The author remained single and lived in her family home until her deportation, even as she earned a fortune from the 10-volume “Nesthäkchen” series, which sold millions of copies between 1918 and 1933. She cared for her sick mother in that home until her death in 1940.

While The Times reports that the character of Nesthäkchen was notable at the time of her debut for her independent streak and her desire for an education and career, Ury’s books possessed an old-school sense of patriotism that would affect her legacy. They were so patriotic, in fact, that when the books were republished in West Germany in the 1950s, many had to be scrubbed of historical specifics and patriotic themes that hinted at the same nationalism that facilitated the rise of the Nazis. The series’s fourth volume, which concerned the home front effort of Ury’s characters during World War I, was banned for politics that appeared overzealous about war and the homeland.

Even more controversial than that book, however, was Ury’s last published work, “Youth to the Fore” (1933). In that book, according to historian and Ury translator Steven Lehrer’s book “Wansee House and the Holocaust” (2000), Ury depicted Adolf Hitler as a welcome force for change who might restore economic power to Germany.

1933 was not too early to understand Hitler’s brutal prejudice against Jews, and so Ury was castigated by some contemporaries, including the Jewish-German literary critic Alfred Kerr, who, according to The Times, called her a “pig” for appearing to cozy up to the Nazis. Lehrer notes that both Ury’s personal ideology and the question of whether the book’s politics were the result of an editor’s heavy pen remain unclear. Ury did not include Nazi symbols in the book.

Ury’s “Nesthäkchen” series has no clear Jewish influences or references, and its broad success in both Germany and in translation in France, Norway and the Netherlands shows how thoroughly assimilated she, like much of Berlin’s Jewry, was in the years before World War II. After the war, when Ury’s books, which span Nesthäkchen’s whole life, were re-released, the books, once smuggled out by many fleeing Nazi Germany, gained a second life. Their readers, while well-educated on the Holocaust, were unaware of the fact that Ury was one of its victims, transported to Auschwitz in a cramped cattle car with 1,190 other Berlin Jews and killed the day she arrived in Poland. While Ury remains obscure to American readers, her impact and fame was such that all of Germany felt the loss.

“Of all the millions of murders the Nazis committed, Else Ury’s stands out,” Lehrer wrote in “The Wansee House and the Holocaust.” “Could anyone imagine the British murdering A.A. Milne a few years after he had written ‘Winnie the Pooh?’”

Remembering Else Ury, Famed Children’s Writer And Victim Of The Holocaust