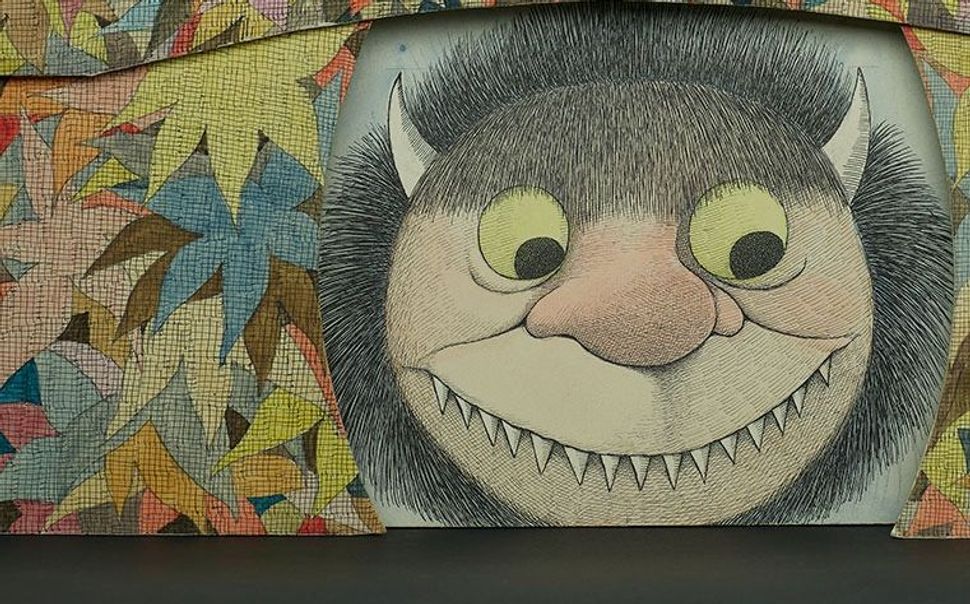 Maurice Sendak’s sketch for Moishe in the opera “Where The Wild Things Are.” Image by Graham Haber/The Morgan Library And Museum

Maurice Sendak had many reasons to be unhappy.

He was born to Polish Jewish immigrants in Brooklyn in 1928, and his childhood was defined by the deaths of his extended family in the Holocaust, a loss that scarred him early and deep. He was a gay man who, sure his parents wouldn’t accept him if they knew, never came out to them. He lived through the AIDS epidemic. He lived through the death of his partner of half a century, Eugene Glynn. If he had cared to be grim, he would have had many things to be grim about.

And horror and mystery were inarguable influences in Sendak’s work. But as a new exhibition of his designs for performance at New York’s Morgan Library and Museum makes clear, the writer and illustrator favored joy. He liked to include self-portraits in his designs, but they were a far cry from that artistic genre’s tradition of self-seriousness. Among his sketches for the Seattle Ballet’s re-envisioning of “The Nutcracker” is a stage curtain painted with a garish close-up of the nutcracker he imagined: A face stretched wide, its eyes — mostly whites — frozen open, and a horribly blank and regimented grin under a totemic nose. He titled it “Self-Portrait.” In a photograph included in the exhibit’s catalogue, Sendak holds the sketch under his own lively face, his eyes so filled with glee that the picture almost seems to quiver.

Sendak, best known for his 1963 children’s book “Where the Wild Things Are,” started designing for opera and ballet late in his career, beginning with a 1980 production of Wolfgang Amadeus Mozart’s “The Magic Flute” for Houston Grand Opera. Sendak adored Mozart, and he especially loved “The Magic Flute,” an opera with a dark dream logic similar to that which structured much of his own work. The world he designed for the production was rich and soft, full of fearsomely adorable beasts, oversize plants that recalled the alluring yet terrible forest landscape of “Where The Wild Things Are” and mammoth quasi-Egyptian monuments. It was a dense and mystical world created in close collaboration with the opera’s director, Frank Corsaro, who first approached Sendak about the project in 1978. 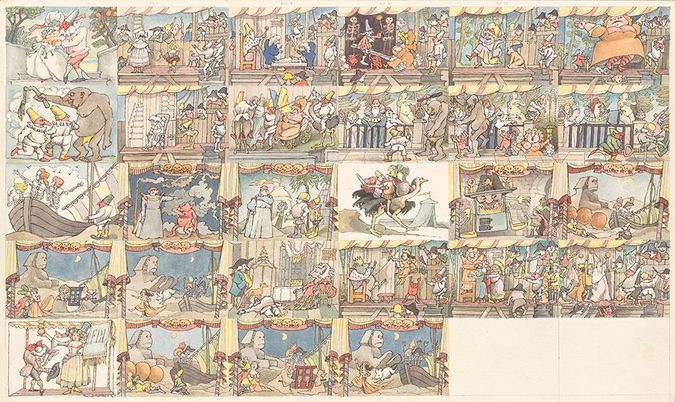 But Sendak had been playing with a visual interpretation of the opera for years. He had a habit of drawing so-called “fantasy sketches,” single-page visual storyboards for musical works that moved him. The Morgan exhibit includes such sketches for, among others, Mozart’s opera “Idomeneo,” Richard Strauss’s tone poem “Death and Transfiguration” and the first act of “The Magic Flute,” the last of which Sendak drew in 1975. The sketch is much less constructed and more freewheeling than the final design, but hints at why Sendak’s work would turn out to be so remarkably well-suited to the stage. Opera relies on the comedy of human foibles, a type of humor Sendak had an instinctual talent for depicting. At the end of his storyboard, the majestic Queen of the Night appears to deliver her introductory aria. Even as Sendak draws her as dignified and terrifying, he’s making fun of her. Something in the puffed-chest performance she delivers for the very small and meek man at her feet says, very clearly, that everything she’s doing is ridiculous — and that’s what makes her so persuasive.

Opera and ballet were ideal venues for Sendak, arenas in which he could freely indulge both his sense of play and his bafflement at the oddness of humanity. In his designs for a 1982 Glimmerglass production of Sergei Prokofiev’s opera “The Love for Three Oranges,” about a prince cursed to love three oranges, each of which contains a fairy princess — really! — Sendak, once more collaborating with Corsaro, imagined a cast of actors playing rigid stereotypes with exaggerated seriousness, to very amusing effect. Sketching a study of the character Celio, Sendak drew a crouched man in a red cape, black hook-nosed mask and pale stovepipe hat with an apparently live owl on it. The plot of “The Love for Three Oranges” makes almost no sense, so as long as the audience’s expectations of normalcy were already out the window, Sendak’s designs seemed to say, he might as well run truly wild with things. 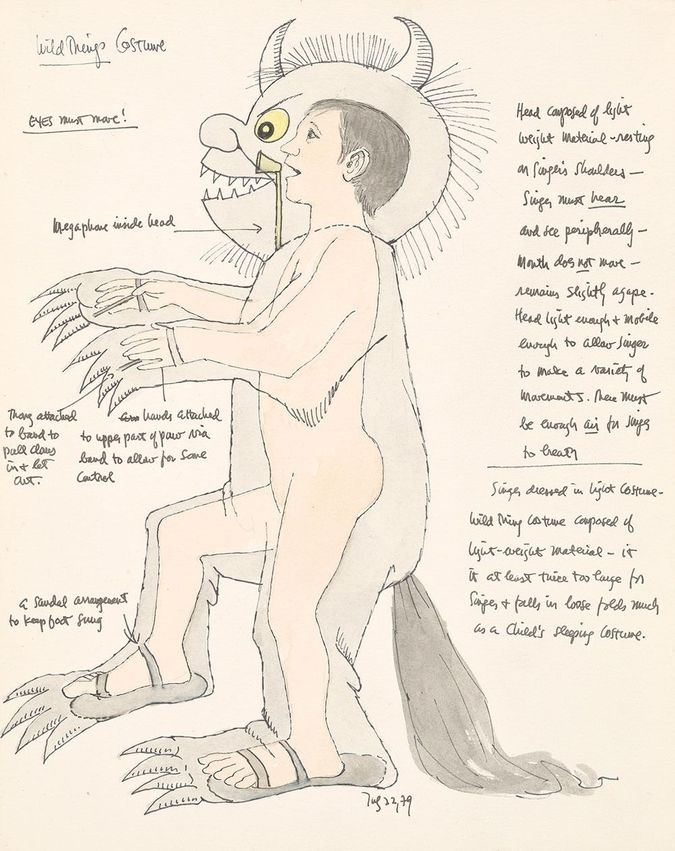 A Maurice Sendak sketch for the puppets used in the opera “Where the Wild Things.” Image by Janny Chiu/The Morgan Library and Museum

Wildest of all Sendak’s designs was the one he created for the 1984 opera adaptation of “Where the Wild Things Are,” an incomplete version of which was first produced in 1980. “Where the Wild Things Are,” for the sadly uninitiated, concerns a young boy named Max who floats off to an island where he becomes king of the Wild Things, larger-than-life monsters with glowing yellow eyes and insatiable appetites for entertainment. On page, the Wild Things are comfortably large, designed to make children shudder just a little. On stage, the Wild Things were so large as to be nearly unmovable; Sendak designed them to be between eight and 10 feet tall, and weigh as much as 150 pounds. Each was operated by three people: A singer, who voiced the Wild Thing from the wings, a puppeteer inside the Wild Thing suit who moved it around the stage, and an offstage operator with remote control over the eyes. (One of those Wild Things, named Moishe, was another Sendak self-portrait: Same enormous, innocent eyes and broad, shy grin.) In a sketch demonstrating how the Wild Things ought to work, Sendak drew an unembellished human body, smooth and mostly boring, strapped inside the rough and wonderful exterior of a Wild Thing. The Wild Thing’s mouth, he noted on the page, “does not move — remains slightly agape.” But, he wrote and underlined, “eyes must move!”

Sendak knew humans were at their best when they understood themselves to be part of a mysterious and unmanageable world. Their eyes should be open and active. They should be so awestruck that they would be left, just like Wild Things, with mouths slightly agape. Onstage, Sendak’s work was a testament to his bone-deep belief in storytelling’s ability to turn people into ideal versions of themselves, who were childlike and full of wonder. Designing “The Magic Flute,” he took particular care with the figures of three child spirits who appear to guide the hero on his quest. “I trust children too,” he said. In his world, we could all be so good. And, briefly, we were.