Philip Roth had style, but he liked utilitarian things. He owned many lamps, all easily adjustable and fairly unpretty. His chairs were mostly comfortable and lived-in. He furnished his house with library tables of varying charm, and two radios that could kindly be described as aged.

When he died at 85 on May 22, 2018, he left behind possessions with stories that seemed clear, and some that even those closest to him couldn’t make sense of. 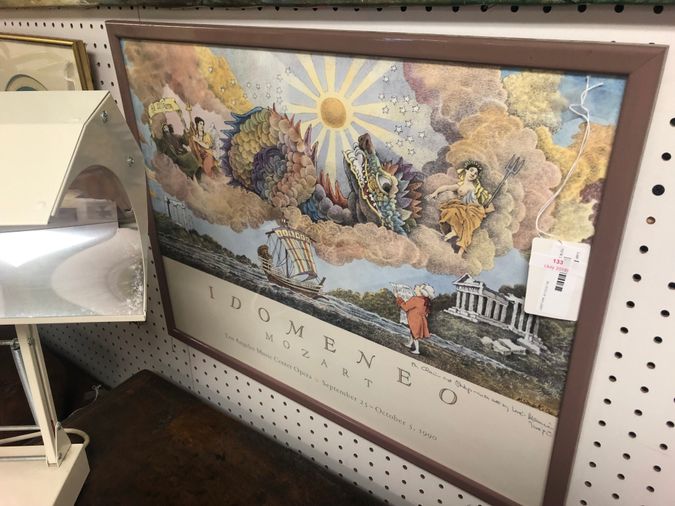 An “Idomeneo” poster signed by Maurice Sendak for Philip Roth and his ex-wife Claire Bloom. Image by Talya Zax

A framed Maurice Sendak poster for a 1990 production of Mozart’s opera “Idomeneo,” which Sendak signed “To Claire and Philip with all my love,” told at least two stories. One was about a friendship between two giants of the arts with a shared interest in Mozart; Sendak loved the composer, and the narrator of Roth’s “The Dying Animal” masturbated to him. And one was about a time when Roth and his former wife Claire Bloom were still seemingly happy together. (Their 1995 divorce, which Bloom chronicled in her 1996 memoir “Leaving a Doll’s House,” was notoriously brutal.)

Less communicative was the slender straw giraffe, found on the second story of Roth’s house, the origins of which no one could pinpoint.

The promise of a story, even one that would never be known, was enough to raise the eyebrows of the staff at Litchfield County Auctions as, on July 20, they sold off 130-odd lots from Roth’s Connecticut farmhouse. The auction house, a single-story building outside Litchfield’s town center, is a modest operation. Bids are placed with paper plates bearing numbers drawn in Sharpie. In the display window next to the announcement of the Roth auction were two statues of dogs arranged, perhaps inadvertently, such that they appeared to be having tea. 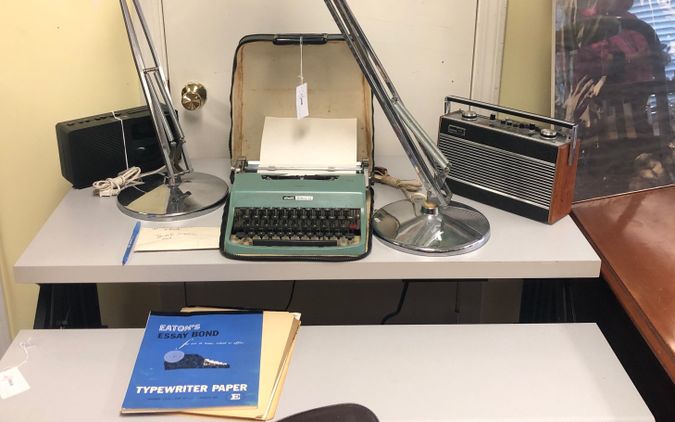 Philip Roth’s Olivetti typewriter, which sold for $17,500, between his two radios. Image by Talya Zax

Before the auction, the proceeds of which went to an undisclosed charity, would-be bidders milled through a small warren of rooms and examined the merchandise. “The Girl from Ipanema” played overhead. Jeff, visiting from London, had been dragged there by friends: “They said, why not come to an auction?” He did not know it would be Roth’s. Yes, he’d read some of Roth’s books; no, he could not remember their names. Two women evaluated some silver jewelry, and noted the planned date for its sale: September 15. “I’m just tagging along with my friend,” said one. “She comes all the time.” The crowd was mostly older locals. “My name’s a little too unique to be putting out there,” said a young man. He lifted the depressed cushion of a blockish leather armchair. “I’m a dealer, so I buy and resell,” he said. “But I’m also a literature nut, and a lot of this stuff is from Philip Roth’s estate.”

“If I have a chance to get one of his typewriters, I’m getting it,” he said. He left shortly after the first of two of Roth’s IBM Selectrics sold for $4,800. Its starting bid was $50. “Does start when turned on,” the auction house’s description promised. 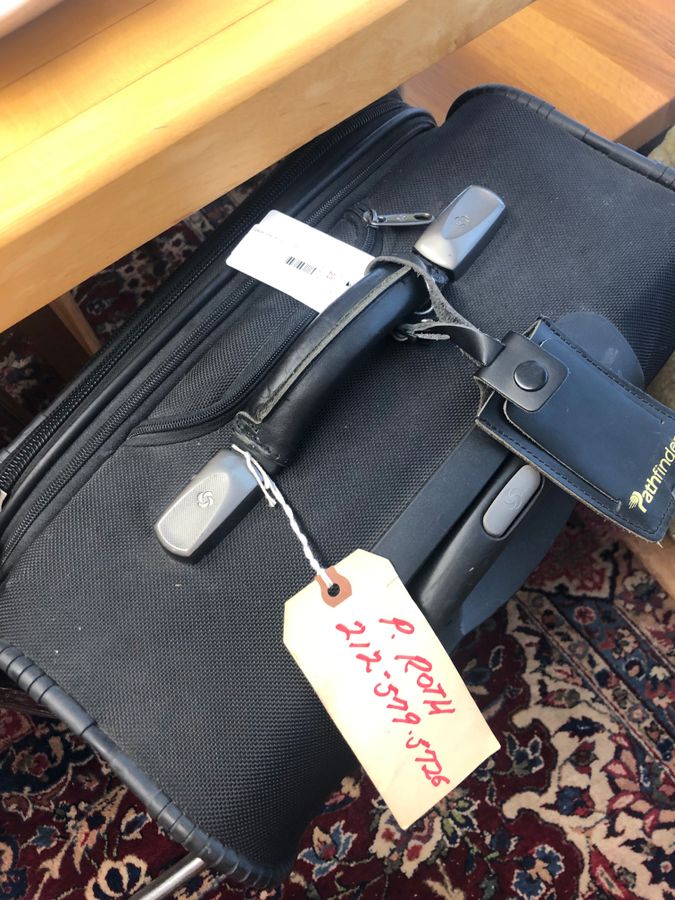 It wasn’t hard to guess what Roth, who rarely left a bourgeois pretension uncriticized, would have made of the scene. He might have liked that an employee taking online bids, who had longish gray hair and a goatee, was the guitarist in a Jimmy Buffet tribute band. And he may have been interested by the people in attendance, very few of whom placed even a single bid; they sat and gossiped as money poured in from strangers online. A pair of leather stools never removed from their boxes — if Roth ever sat on them, it was in the store where he bought them — sold for over triple their asking price. His suitcase, with a luggage tag written in his hand, went for $550. The giraffe took a neat $375. The “Idomeneo” poster, $1,900.

The day after the auction, one of Roth’s old friends showed me around Roth’s home. Still housing its late owner’s books, all eventually destined for the Newark Public Library, it was far from empty. The estate’s executors had left untouched, in the living room, an off-white couch with pink velvet throw cushions, and a matching armchair, both clearly well-used. They left a copy of “iPhone 5 for Dummies” in the kitchen. An electric fly swatter with a bright orange rim, blazoned with the name “The Exterminator,” on the counter above the dishwasher. Neat brown clogs and a black umbrella on the shoe rack by the door. 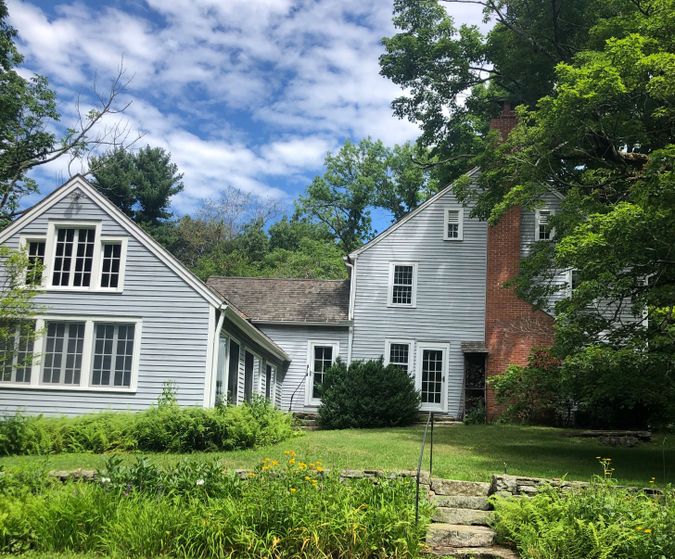 There were two Philip Roths in Litchfield last weekend. One, at the auction house, was a magnified presence, a persona so acclaimed that his copy of a cheap Sandy Koufax baseball card sold for $950. And one, in the long-inhabited and long-loved house, was a normal man with normal tastes. He left behind a half-finished bottle of Knob Creek bourbon, bottles of vitamins lined up in a cabinet, a butterfly magnet on the fridge, some cheerful and unfussy aprons. It can be chilling to watch a person’s touch make an object valuable, as if the person was assumed to, in some way, have become the object itself.

As we left we found a tree frog hopping down Roth’s gravel driveway. It was small enough that it could have rested comfortably on the tip of my little finger. My guide, very gently, used a leaf to shoo it off the road, and it shot gracefully into the grass and clover. It was a hot bright day in New England, and around us, everything was quiet.