How Rod Serling Fought Injustice – And Nazis – On ‘The Twilight Zone’ 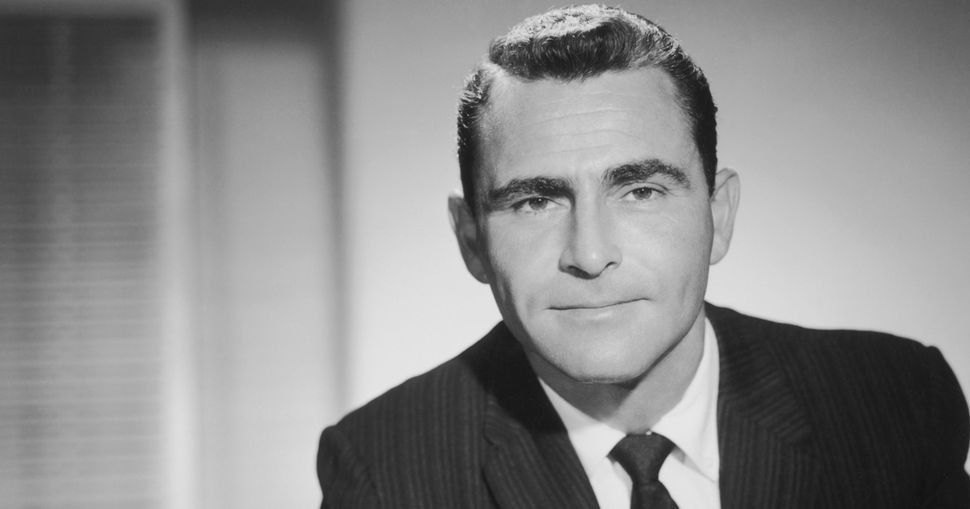 Rod Serling wanted to fight Nazis; he missed his chance, but later got another.

While he had hoped to enlist in the armed forces before his graduation from Binghamton Central High School in 1943, a teacher told him to wait. “He was sent to the Pacific; not where he had hoped,” his daughter Anne Serling recalled in an email to the Forward.

Serling became a paratrooper, serving near the island of Leyte in the Philippines around the same time as novelist Norman Mailer, who based “The Naked and the Dead” on his experiences there. It’s likely Serling first heard the phrase “The Twilight Zone,” an aeronautic term for when a plane loses sight of the horizon during landing, while in the service. 60 years after Serling debuted his anthology series of the same name, “The Twilight Zone” ascended from a term of art to the status of cliché.

Like fellow vet Joseph Heller’s “Catch-22,” the phrase is used to refer to an absurd situation, where logic is distorted and society slips into unreason. This was always Serling’s concern, and his anger at American prejudices, packaged as science fiction or fantasy, made the series more than the sum of its genre parts.

“The Twilight Zone” first aired on October 2, 1959. Serling was 34 and already a bruised and bitter TV writer, tired of compromising his vision. He took his responsibility as a social dramatist — or, in his words, “the menacer of the public’s conscience” — seriously, and chaffed at sponsor-driven censorship. As Anne Serling recalls in her 2014 memoir, “As I Knew Him: My Dad, Rod Serling,” CBS and sponsors like U.S. Steel interfered with two separate scripts commenting indirectly on the 1955 Mississippi murder of black teenager Emmett Till by two white men. Both the “United States Steel Hour” and “Playhouse 90” feared a boycott from the South, and the former went so far as to remove Coke bottles from the set, believing them to have a “Southern connotation.”

Soured by those experiences, Serling turned his attention to allegory couched in genre tropes and Kafkaesque scenarios. Though, the night before “The Twilight Zone” premiered, he told Mike Wallace on “The Mike Wallace Interview,” that the series “doesn’t use scripts as vehicles of social criticism,” the creator was surely being coy.

No amount of censorship and studio interference, it seems, could dampen Serling’s commitment to social justice. If there were themes that arced over the five original seasons of “The Twilight Zone,” the evils of totalitarianism (“The Obsolete Man,”) McCarthyite othering (“The Monsters are Due on Maple Street”) and bigotry (“He’s Alive”) are the most robust. The messages, punctuated by Serlings’s narration, flit in viewers’s heads as capably as the clocks, doorways and spirals of the Marius Constant-scored opening credits, or even the show’s iconic twists.

Serling’s ethics came in part from his father, Samuel, a first-generation American who told his sons, Rod and Robert, “I am not a good Jew, but I think I am a good person… my own philosophy is, I take people for what they are, not where they go pray.”

The Serlings were Reform and celebrated Christmas (which was also Rod’s birthday). While the Serling children went to Sunday school at the Binghamton Jewish Community Center, where Rod would play ping-pong, join a Boy Scout troop and learn from the center’s philosophical humanist director, Isidore Friedland, the family only attended services on the High Holidays.

”It is interesting that his first experience of intolerance came in high school from his own people when he was blackballed from a Jewish fraternity for dating non-Jewish girls,” Serling told the Forward. But Serling also faced prejudice from his Christian father-in-law, who, according to his daughter’s memoir, told his wife, Carol, “You are not to marry that black-eyed Jew.”

Serling would become Unitarian, and once described his faith by saying, “I believe in God. But I believe in man more,” according to Nicholas Parisi’s 2018 biography “Rod Serling: His Life, Work And Imagination.”

“I have to believe in man,” Serling said in 1972 in a recording for his spoken word album “Rod Serling Speaks,” “if we don’t do it, no one else shall. And we’ve got such a long way to go, the problems are so seemingly insurmountable.”

Parisi likens this philosophy to Deism, where God does not interfere in the course of human events, writing, “Serling believes humans have to work to solve the world’s problems.” This philosophy also resembles tikkun olam.

One problem that Serling had to resolve was that of the Nazis. Stationed in the Pacific, he did not get to fight them and their anti-Semitic doctrine. But in 1961, while Adolf Eichmann faced trial in Jerusalem, Serling had his chance at justice. And, as the heavy-browed, stentorian narrator, he was the face of it as well.

In “The Twilight Zone” episode “Deaths-Head Resisted,” an SS Captain, Gunther Lutze (Oscar Beregi Jr.) pays a fond, nostalgic journey to Dachau from his hiding place in South America. On entering the camp, he discovers former prisoner Alfred Becker (Joseph Schildkraut, who played Otto Frank in the Broadway premiere and film of “The Diary of Anne Frank”). Becker is still wearing his striped pajamas. Becker would also appear to be a ghost, having been killed by Lutze 16 years before.

Becker serves as Lutze’s judge and, in a blistering monologue, Serling’s mouthpiece. When Lutze tells his victim “It’s utterly ridiculous to dwell on these things. You did as you thought best, and I functioned as I was told,” howls break out in the courtyard, issuing from unseen mouths. Lutze asks what the noise is.

“They just heard you offer the apology for all the monsters of our times,” Becker answers. “‘We did as we were told.’ ‘We functioned as ordered.’ ‘We merely carried out directives from our superiors.’ Familiar, is it, captain? It was the Nazi theme music at Nuremberg, the new lyrics to the Götterdämmerung, the plaintive litany of the master race as it lay dying. ‘We did not do, others did.’ Or ‘someone else did it.’ ‘We never even knew that it was being done.’ Or ‘we did it, but others told us to.’”

Becker concludes by saying “Captain Lutze, ten million human beings were tortured to death in camps like this. Men, women, children, infants, tired old men — you burned them in furnaces. You shoveled them into the earth. You tore up their bodies in rage, and now you come back to your scenes of horror and you wonder that the misery that you planted has lived after you?”

Lutze is escorted to a barracks building, where a crowd of spectral prisoners in uniform glowers over him. They find him guilty, sentencing him to feel the torment he inflicted on others — the gunshots, the hangings, the human experiments.

“This is not hatred, this is retribution,” Becker tells him. “This is not revenge, this is justice. But this is only the beginning, Captain…. Your final judgment will come from God.”

Serling’s seething anger is palpable, but he doesn’t let Becker have the last word. As in every episode, he gives the closing narration himself, and this time, he changed his own formula.

“Almost all of my father’s closing narrations ended with the phrase ‘The Twilight Zone,’” Serling wrote in her memoir.

“The message of this episode, however, was clearly so important to him, so central to his passion, that he saw the need to go beyond the fantasy. As he said, ‘All the Dachaus must remain standing. The Dachaus, the Belsens, the Buchenwalds, the Auschwitzes – all of them. They must remain standing because they are a monument to a moment in time when some men decided to turn the Earth into a graveyard. Into it they shoveled all of their reason, their logic, their knowledge, but worst of all, their conscience. And the moment we forget this, the moment we cease to be haunted by its remembrance, then we become the gravediggers. Something to dwell on and to remember, not only in the Twilight Zone but wherever men walk God’s Earth.’”

While here his messaging smoldered with righteous judgment, Serling once received considerable flak for another script of his, the final episode of the CBS show “Playhouse 90.”

Set in the Warsaw Ghetto, the 1960 episode “In The Presence of Mine Enemies,” followed a Jewish family whose patriarch is a rabbi. The rabbi’s daughter falls in love with a young German lieutenant played by Robert Redford. Many in the Jewish community were outraged that Serling humanized Redford’s Nazi character.

In an open letter to CBS, “Exodus” author Leon Uris wrote “Joseph Goebbels himself could not have produced such a piece of Nazi apologetics.”

Still others, of a more hateful stripe, accused Serling of being too kind to the Jews.

“The show has engendered considerable comment both pro and con,” Serling wrote to his friend Julie Golden, in a letter quoted in Anne Serling’s memoir. “I now stand at the middle of two poles of accusation. Either I’m a great and vicious anti-Semite (according to Leon Uris) or I’m a dirty, Jew-loving bastard (from the Steuben Societies of the United States).”

Serling found himself in a hazy, twilight zone-field of accusations. Ironically, given these charges, Serling never took Nazi characterization lightly, forbidding his children to watch the comical P.O.W. camp officers on “Hogan’s Heroes.” He never found it funny. In a 1968 speech at the Library of Congress, he said of the show “what it does to history is to distort, and what it does to a recollection of horror that is an ugly manner of record is absolutely inexcusable.”

Anne Serling maintains that her father was “fiercely proud of his heritage,” and added that he “would be deeply saddened by the resurgence of white nationalists and by what is happening in the world today.”

PJ Grisar is the Forward’s culture fellow. He can be reached at Grisar@Forward.com,

How Rod Serling Fought Injustice – And Nazis – On ‘The Twilight Zone’