5 Months After His Selection, The Director Of The Polish Jewish Museum Waits To Be Reinstated – Here’s Why 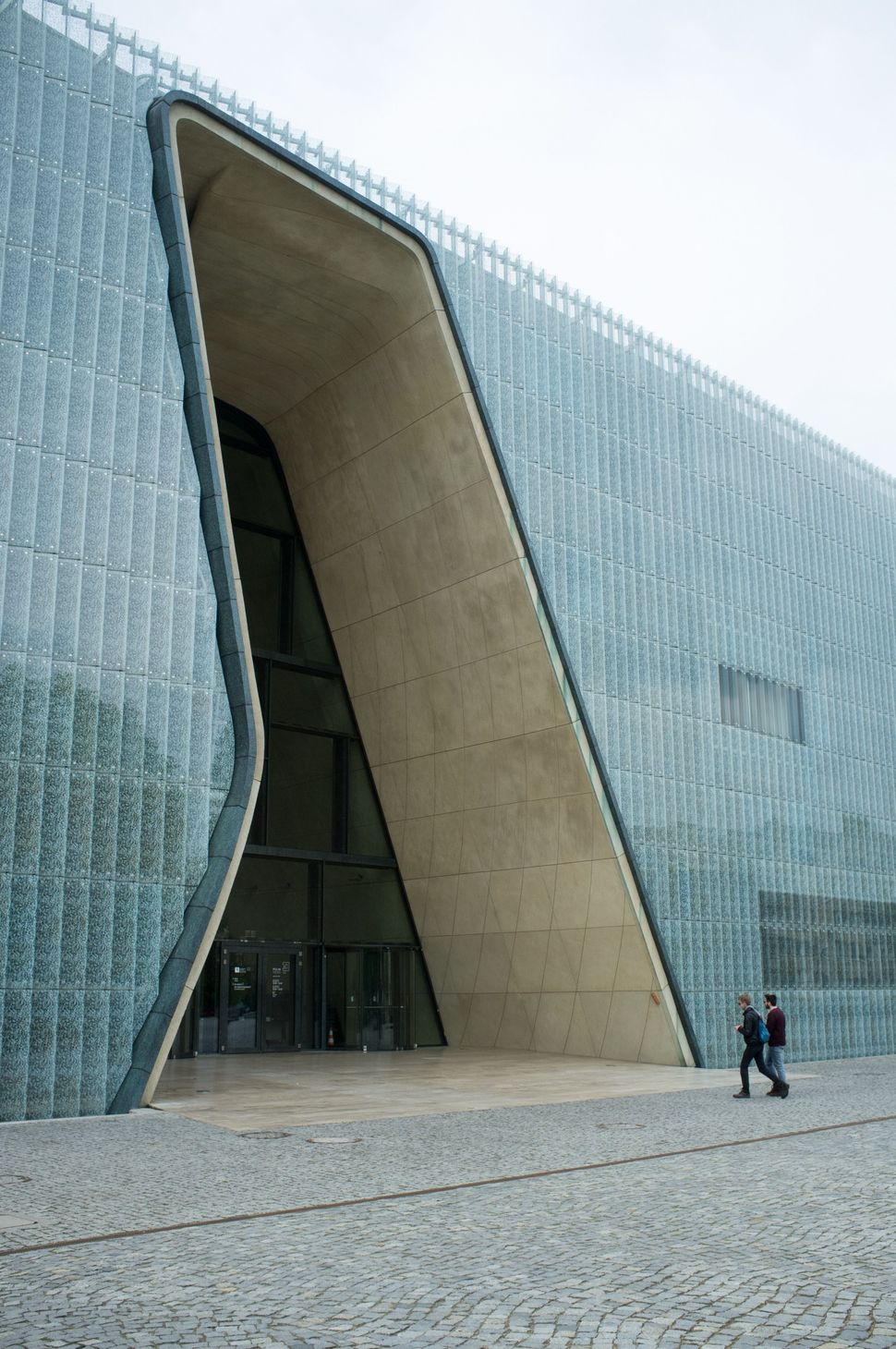 The entrance of POLIN, the Museum of the History of Jewish People on Warsaw, Poland Image by Getty/Chuck Fishman /Contributor

When it opened in 2014, POLIN: The Museum of the History of Polish Jews, in Warsaw, was a landmark achievement.

It took the participation of three separate bodies — the Polish national government, the city of Warsaw and the Association of the Jewish Historical Institute of Poland — and over 20 years of talks for the museum to become a reality. Arriving almost 70 years after the end of World War II, and almost half a decade after Poland lost the bulk of its remaining Jews to a 1968 anti-Semitic campaign, POLIN promised to highlight the nation’s 1,000-year history of Jewish of life and culture.

Dariusz Stola, a professor of history, who is not Jewish, but whose vision has been praised by Jewish colleagues, was chosen to direct the museum in January of 2014. Now, his future, and that of the museum’s, is uncertain.

A year after POLIN officially opened (it had a “soft opening” in 2013), Poland’s politics shifted. The moderate government was replaced by a nationalist-conservative party — the Law and Justice party — that sought to downplay Poland’s role in the Holocaust or, at the very least, end the policy of apologizing for the attrocities of the past. In 2018, a law was passed making it a criminal offense to blame Poles or Poland for Nazi crimes. While the Holocaust was never the focus of POLIN’s mission, the law, according to Stola, led to a rise in anti-Semitic hate speech and sentiment.

“We had excellent relations with the Ministry of Culture under the previous government in terms of extending financial support in addition to the regularly subsidy which the Ministry had promised,” Stola told the Forward over the phone. “It continued with the present government, surprisingly well, I would say. But the situation rapidly deteriorated in early 2018.”

The reasons for this falling appear to be two-fold. Stola was vocal in opposing the legislation that made invoking Poles as complicit in the Holocaust illegal in January of 2018. Two months after he criticized the law, POLIN opened a popular exhibition, “Estranged,” on the March 1968 anti-Semitic campaign, which saw the emigration of 13,000 Polish Jews, whose identities were exposed and livelihoods threatened following a wave of anti-Zionist and anti-Jewish prejudice, as Masha Gessen reported in a September 23 piece for the New Yorker. The campaign, as reportedin Cultures and History Forum, was linked to anti-Israel propaganda stemming from the Six-Day War — which alleged dual loyalty on the part of Poland’s Jewish minority — and ro protests pushing for a democratized Poland, said to be led by Jewish students.

“Estranged” was controversial because it drew parallels between the anti-Semitic actions of the past and contemporary Polish society — a parallel that was made explicit at the end of the exhibition, where a wall panel presented anonymous quotes from 1968 and 2018. Two of the individuals quoted, journalists Magdalena Ogórek and Rafal Ziemkiewicz, recognized their tweets in the display. Ogórek, whose tweet about a left-wing senator Marek Borowski allegedly changing his surname from “Berman” was juxtaposed with a 1968 article that revealed a Polish author’s original Jewish surname, sued Stola for defamation. The court dismissed the suit.

Stola was surprised at the anger of the response to “Estranged,” noting that the museum regularly added a contemporary element to temporary exhibitions to show that the past was still relevant. Though he recognized that there was an uptick in anti-Semitism in Poland, Stola thought the ruling party would welcome the exhibit’s narrative, which shows that a Communist government was behind the 1968 purge.

“Historically, anti-Semitism in Poland was the business of the Nationalist Right,” Stola said. “‘68 was a Communist campaign, so I supposed a party of the Right would welcome an exhibition which clearly shows the Communist organization of the campaign.”

But President Andrzej Duda’s Law and Justice party didn’t see it that way. Some even found the title of the exhibition, which translates from the original Polish as “Alien/Foreign in [one’s own] home” was accepting the Communist view that Jews were not Polish.

Prime Minister Mateusz Marawiecki, during a 50th anniversary speech marking the start of the March 1968 campaign, responded to the exhibition’s title, saying Jewish Poles were not alien but “were in their home, they were their own people, our citizens,” according to Jasper Tilbury’s translation in Cultures and History Forum.

Stola learned that his position was in trouble in early 2018, after Polish Minister of Culture Piotr Gliński wrote a letter to POLIN’s two other founding bodies, the City and the Association of the Jewish Historical Institute of Poland, claiming Stola’s activities were “anti-Polish.”

In March 2018, Gliński himself received an angry letter from two Law and Justice senators, Rafał Ślusarz and Artur Warzocha, who according to Tilbury’s translation, argued that the contemporary quotes used in “Estranged” had been “tendentiously interpreted as examples of anti-Semitic discourse whereas in fact they are not.” The senators asked Gliński what steps he planned to take to influence the museum’s direction.

“The claim was that this exhibition claims that there is no difference between Poland today and Poland in 1968, which is nonsense!” Stola said. “We devoted so much space to show how much the single party dictatorship of the Polish Communist Party was responsible for the campaign.”

Stola, citing the letter from Gliński, which he heard of after the fact, felt he was being pressured to resign. Instead, the founding members of POLIN initiated an open competition for Stola’s position, timed to the expiration of his term in February 2019.

The the contest, Stola said, was not, in itself, unusual. But in this instance, the late announcement of the contest by Gliński — made after he refused requests by the mayor of Warsaw and Association of the Jewish Historical Institute for Stola to keep his role — was atypical.

“It looked like a compromise,” Stola said of the contest. “It was fine for me, because I believe competition is good – this is what we fought for 30 years ago under the Communist regime.”

Because of the unique conditions of POLIN’s founding, none of the three entities that formed the institution it could unilaterally decide to replace the director, so the stakeholders formed a 15-person committee, made up of museum trustees, employees, trade union and Jewish community representatives and the deputy minister of culture. In a May 10 vote, 11 of the 15 members selected Stola, three cast their vote for Monika Krawczyk, then the chairperson of the Jewish Communities of Poland, and one abstained. But Gliński had to formally reappoint Stola and, five months later, he has yet to do so.

In a September 24 radio interview, Gliński claimed Stola “runs a very aggressive politics at the museum” and “did great harm to this institution by politicizing it.”

When accused of politicizing POLIN, Stola says he believes the accusation to be vague.

“I don’t know what it means,” Stola said. “I’ve never heard a single clear argument pointing to where and what I did wrong.”

Stola hasn’t taken another job; instead, he is waiting to be reinstated, ready to report for work. In the interim, Stola’s deputy runs POLIN’s daily operations. “Estranged” closed in September 2018, and the museum is expected to start a large-scale educational program funded by the Norwegian government in the near future. Stola fears that the museum’s stability is in trouble without a formal director to oversee its 160 employees.

But through his forced sabbatical, Stola has seen a wide show of support, both for him and for POLIN’s mission.

“I really appreciate this,” Stola said. “I wouldn’t say I’m grateful to Minister Gliński for contributing to it, but in the difficult moments, you realize who are your friends and I realize how many friends we have, both in Poland and abroad.”

5 Months After His Selection, The Director Of The Polish Jewish Museum Waits To Be Reinstated – Here’s Why