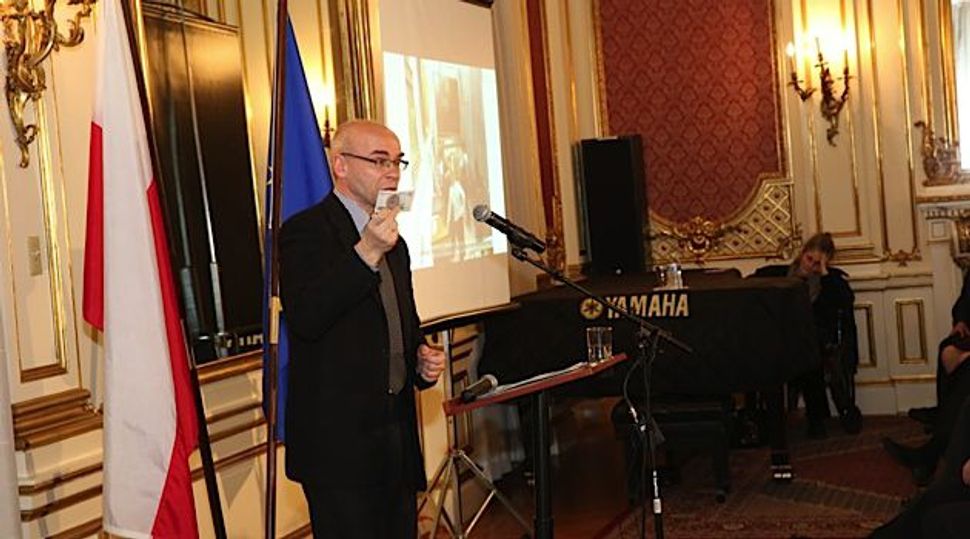 Dariusz Stola, the newly appointed director of the Museum of the History of Polish Jews, never seems to tire of discussing the groundbreaking institution’s most important mission.

The bespectacled history professor, who is not Jewish, says the museum aims to show off the richness of Polish Jewry’s 1,000-year history, not its devastation in the Holocaust.

“If you, God forbid, were killed in an accident tomorrow,” said Stola as he leaned forward and knocked slightly against the underside of a filigreed wooden coffee table. “would you want people to remember the day of your death, or your life?”

Stola, 50, in a grey jacket, with short, fair hair and rimless glasses, was visiting to introduce himself to American stakeholders. Since its “soft” opening last April, the museum has shown temporary exhibitions; its core exhibition is slated to open on October 28. Stola repeatedly emphasized the mantra: It’s a museum of life. That’s why only one out of eight galleries will be dedicated to the Holocaust, which eradicated 90% of the Polish Jewry.

Stola stuck closely to talking points during an interview with the Forward at the Polish Consulate General in New York, a lavish, century-old building near Grand Central Station, complete with gold stucco, ceiling frescos and original Tiffany windows. But Stola brimmed with gregarious charm later in the evening, at an event at the consulate for around 200 invited guests.

Equipped with a slideshow, he presented snippets of the core exhibition, such as the reconstruction of the wooden synagogue of Gwozdziec, in what is now Ukraine. The shul’s meticulously decorated, colorful ceiling, and numerous multimedia installations will render the museum the most technologically advanced in Eastern Europe, according to Stola.

Stola said the museum would attract a broad audience and that “anyone will be proud of this great civilization.” The core mission of the museum is to show that Polish and Jewish histories are inseparable and that Jews didn’t live in isolation. Stola notes that the museum’s exhibitions will explore the effect of anti-Semitism on Jewish life, but will not place undue emphasis on anti-Semitic figures.

“I’m not doing a museum of anti-Semites,” he says. “Someone else can do fundraising for that.”

The attendees chatted in Polish, Hebrew and English while sampling Polish delicacies. The audience included illustrious figures such as Ryszard Schnepf, Poland’s ambassador to the United States, and Polish-born Holocaust survivor and philanthropist Sigmund Rolat, who is the chairman of the North American Council of the Museum of the History of Polish Jews, a not-for-profit organization that supports the museum.

The museum was first conceived in 1995 and in 2005, the city of Warsaw and the Polish Ministry of Culture and National Heritage agreed to finance the building and the basic operating costs. These amounted to more than half of the museum’s budget, so far over $73 million. The Association of the Jewish Historical Institute of Poland and donors from around the world have come up with almost $50 million, making the museum a public-private partnership. The building, designed by Finnish architects Rainer Mahlamäki and Ilmari Lahdelma, stands on the site of the Warsaw Ghetto during the Nazi occupation.

Stola was appointed director by the Polish Ministry of Culture in January, and began working on March 1. He spent 25 years researching Polish-Jewish history as well as the Communist regime and migration, and served as a historical consultant for the core exhibition before his appointment. He took over from acting director Andrzej Cudak, who had been in the position since August 2012. In April 2011, the museum’s founding director, Jerzy Halbersztadt resigned amid struggles over financial decisions with the Polish Ministry of Culture.

With the preparations for the official opening well under way, and the operating budget for the next five years secured, Stola faces a busy but hopefully less tumultuous tenure. During his short visit to the United States, Stola’s schedule included a meeting with Abraham Foxman, the director of the Anti-Defamation League, lectures at Stanford and Berkeley universities, and visits to the Museum of Jewish Heritage in New York and the National Museum of American Jewish History in Philadelphia.