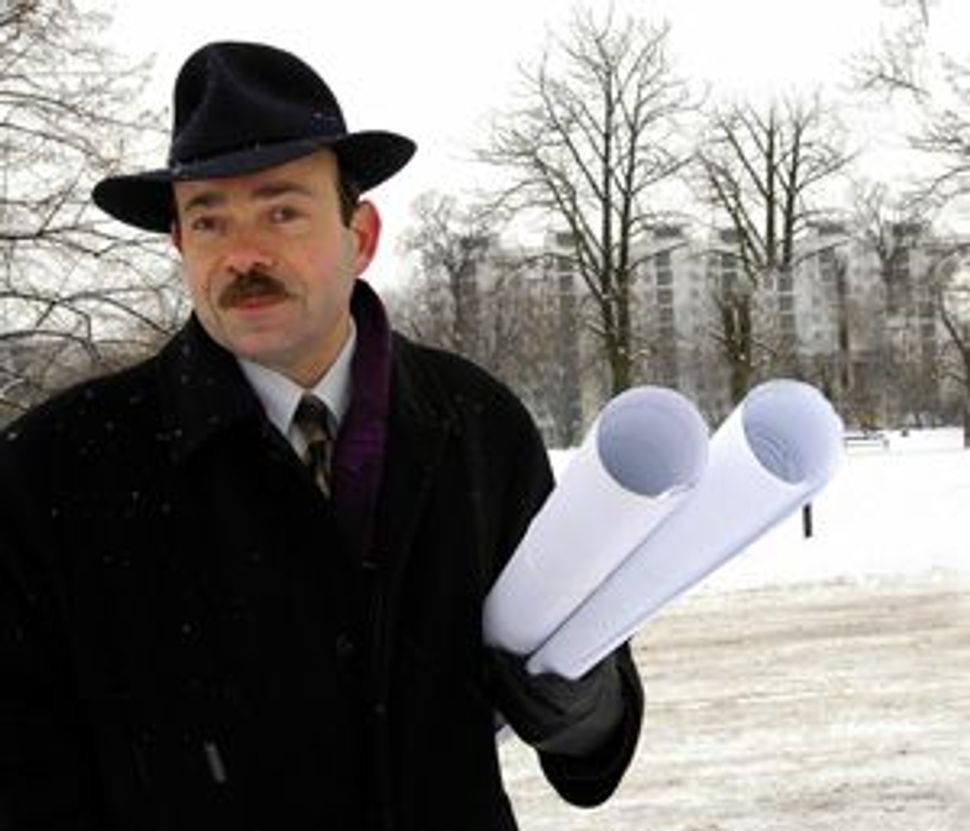 Resignation Under Fire: Project director Jerzy Halbersztadt clashed repeatedly with museum board members over his vision for the institution he envisioned. Image by Handhouse Studio

The recent departure under pressure of the creator and overseer of Warsaw’s Museum of the History of the Polish Jews is provoking concern about the future of the ambitious project, which aims to preserve a legacy of 1,000 years of Jewish life in Poland. 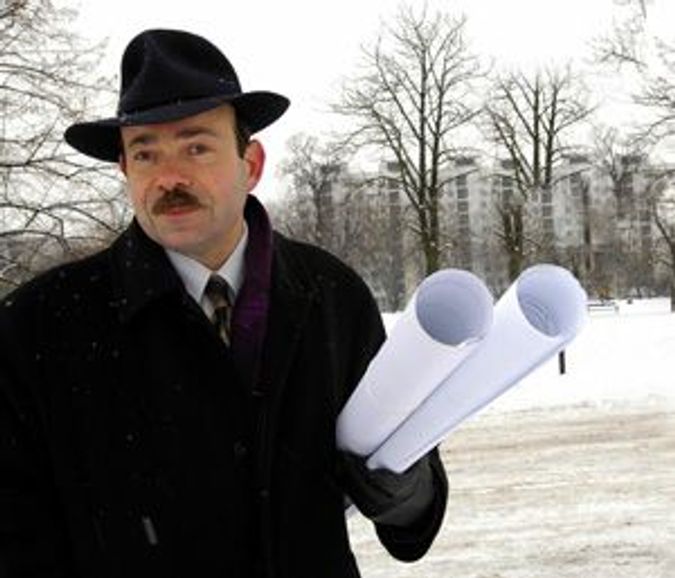 Resignation Under Fire: Project director Jerzy Halbersztadt clashed repeatedly with museum board members over his vision for the institution he envisioned. Image by Handhouse Studio

Jerzy Halbersztadt, who has been intimately involved with the museum since its conception in 1996 and its project director since 2005, announced his resignation at an April 22 press conference after months of indecision by Poland’s Ministry of Culture about renewing his five-year contract. Halbersztadt’s contract had lapsed five months earlier.

Since Halbersztadt’s announcement, the museum has been run by his former deputy, Agnieszka Rudzińska, while the institution’s trustees search for a successor.

Halbersztadt’s said his unexpected departure came about as a result of repeated clashes with the Ministry of Culture over what he regarded as inadequate funding for the museum’s day-to-day operations. But in a March statement to the press, Culture and National Heritage Minister Bogdan Zdrojewski said that Halbersztadt was unable to cooperate with others and that he believed it was time for the project to have a new director.

Halbersztadt told the Forward that after his most recent contract lapsed, “They reduced my authority as director. I was unable to make any strategic financial decisions and even [lost my] right to contract staff.”

The Culture Ministry, which is responsible for the building’s maintenance and daily operating costs, is one of the museum’s three sponsors. The others are the city of Warsaw, which provided the land, and the Association of the Jewish Historical Institute of Poland, a nongovernmental organization that is responsible for raising funds internationally to design and produce the museum’s core exhibition. To date, the Warsaw municipality and the Ministry of Culture have contributed about $65 million for the construction and operation of the museum’s building, according to fundraising manager Marta Wróbel. The Association of the Jewish Historical Institute of Poland has collected pledges totaling $43 million for the core exhibition, of which $20 million has been received.

Halbersztadt’s departure came despite an April 6 letter to the Ministry of Culture, signed by 52 Polish public figures, calling for the director’s contract to be renewed. “He is an expert on Polish-Jewish relations, has credibility not only in Poland but abroad, and is a renowned historian,” stated the letter, whose signers included former Polish prime minister Wlodzimierz Cimoszewicz, former Warsaw mayor Marcin Swiecicki, Oscar-winning filmmaker Andrzej Wajda and a top American donor to the museum, Tomek Ulatowski.

“The museum has its problems,” the letter stated, “but as the saying goes: Perfection is the enemy of the good.”

The ministry still did not make up its mind on Halbersztadt’s fate, however, leading the embattled director to make it up for the ministry.

Speaking on the Ministry of Culture’s behalf, Ewa Junczyk-Ziomecka, Poland’s New York consul general and a former deputy director of the museum, told the Forward, “The ministry wishes to underline the fact that there had been no conflicts between the ministry and the museum; however, taking into consideration the current stage in the museum’s development process, a need for creation of a new team of specialists has arisen.”

Junczyk-Ziomecka said that the ministry “does not exclude the possibility of further cooperation with Mr. Halbersztadt, especially as his 14-year-long experience in working on the project of the museum is very vital.”

Halbersztadt, 59, who was born and raised in Warsaw after the war, had previously worked for almost 15 years for the United States Holocaust Memorial Museum in Washington, D.C. He was its Polish representative. Halbersztadt’s supporters were dismayed to hear that his contract had not been renewed.

“For the last 15 years, Jerzy had achieved something that no one believed would be possible,” said Barbara Kirshenblatt-Gimblett, the academic who heads the exhibition’s international design team. “He created a very fine team that is highly skilled and motivated to bring [the project] to completion by April 2013. He’s been at the project longer than anybody, and I fully support his vision — to present the past thousand years of Jewish life in Poland and do so in the place where they lived.”

“We were very disappointed that Jerzy was not renominated. He really did a lot,” said Swiecicki, who now chairs the Polish committee supporting the museum. “It’s going to be very difficult finding someone else at this late stage.”

Halbersztadt said that one of his greatest frustrations as project director was his inability to convince the City of Warsaw to use a state-of-the-art fire-protection system that uses only 1% water, in order to protect artifacts from water damage. The system chosen is “not designed for a museum,” he said, since it uses water sprinklers that would flood endangered spaces in the event of a fire, “causing total destruction of the artifacts and computers.”

“This is unacceptable and unthinkable in contemporary systems,” Halbersztadt said. “They thought I would give up on this issue, but I wouldn’t, because I was afraid the standard sprinkler system could greatly harm the museum.”

Other sources, however, said the fire system issue was a symptom of the dispute, not its cause. “The parties had been in tension with each other for some time, and something had to give,” said a consultant who has been monitoring the situation closely.

The consultant, who requested that his name not be used because of his ongoing relationship with those involved in the project, cited other features Halbersztadt insisted upon that might be viewed as extravagances, such as a 450-seat auditorium. Washington’s Holocaust museum, he noted, seats 425 in its largest auditorium, and the auditorium for New York’s National Heritage Museum seats just 250.

Despite the funding disputes, Swiecicki said it was a big mistake to lose Halbersztadt. “Jerzy may be demanding and difficult, but they don’t have anyone better, and it will be very difficult to find another person with as much museum experience and who knows Polish-Jewish relations as well as he does,” he said.

Kirshenblatt-Gimblett called Halbersztadt “a visionary” whose mission was to create a museum that conveyed the message that “Jewish history in Poland did not begin or end with the Holocaust.”

“Before the Holocaust, Poland was a diverse society: multi-religious, multilingual and multiethnic,” Kirshenblatt-Gimblett said. “Few people know that for hundreds of years, Poland was much more tolerant of the Jews than Western Europe was. This is why such a large Jewish community was able to form and to create such a great civilization.” And though only a remnant survived the Holocaust, she said, the Jewish community has been experiencing a renaissance since the fall of communism in 1989.

“This museum has the potential to provide a bridge across time, space and between people. That is all part of Jerzy’s vision,” Kirshenblatt-Gimblett said.

Rukhl Schaechter is a staff writer and editor at the Forverts, from which this article was adapted. Contact her at schaechter@yiddish.forward.com