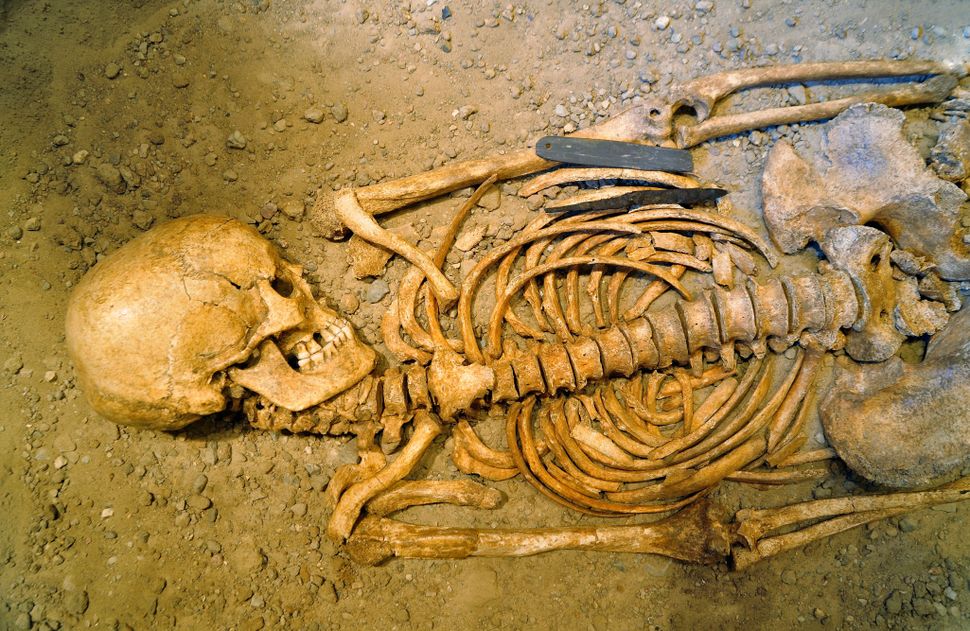 A skeleton from the Viking era Image by iStock

1,000 years after his death, his life became the subject of speculation in the emerging field of race science — with potential global consequences. Two great powers strained to link the skeleton to their respective versions of history. The Nazis insisted its heritage was Nordic; later, the Soviets claimed it for the Slavs.

But the truth likely lies between the two extremes.

Discovered in July of 1928 by the Ukrainian Ivan Borkovsky, the skeleton’s most unique accessory was its sword, part of the large arsenal with which it was buried and unlike any artifact found in surrounding graves. The blade, which was found to resemble those used by Vikings, made the skeleton an important flashpoint for the Nazis when they invaded Czechoslovakia in 1939.

The Nazis pushed Borkovsky, who had not yet published his findings on the skeleton, to identify it as a Viking’s remains, both as a way to boost their ideas of racial purity and to justify the Reich’s expansion beyond Germany. If this unknown warrior was of Viking stock, the Nazis reasoned, it pointed to Nordic Europeans — considered by the Nazis to be Aryans — having an established history in Czech land, and thus a Third Reich claim to the territory.

Borkovsky, facing the threat of deportation to a concentration camp, was forced in his writing — heavilly edited by Nazi officials — to agree.

But the archaeologist’s position shifted by the war’s end, when Czechoslovakia came under the control of the USSR. The Nazi-era theory of the skeleton wouldn’t do under the new regime, and so Borkovsky provided an older narrative favored by his old boss at Prague’s National Museum: That the skeleton was, in fact, a Slav, a member of the Premyslid dynasty that built Prague Castle in Bohemia. Once again, it was comply or face deportation — this time to a gulag.

The truth of the skeleton’s origins, and what those might suggest about the contested region in which it was found, is still unclear. But a paper recently published in the archaeology journal Antiquity supports the notion that the individual lived a life that did not fit neatly into either the Soviet or Nazi narratives.

Professor Jan Frolik, co-author of the paper and a medieval archaeologist at the Czech Academy of Sciences, told the BBC that the deceased was almost certainly not born in Bohemia. Dental analysis performed on the skeleton showed that he grew up in Northern Europe, likely on the south coast of the Baltic Sea or in Denmark. Harking back to mid-century battles over the skeleton, the Nazis would be more pleased with this interpretation than the Soviets.

But the findings do not, in fact, present such a clear-cut case.

“[J]ust because he was born in the Baltic doesn’t automatically mean he was a Viking,” Frolik said. “Back then the south coast of the Baltic was also home to Slavs, Baltic tribes and others.”

The skeleton may have been, Frolik’s paper argues, a Slavic-speaking Viking or a Slav who chatted in Old Norse. The only thing we can really know about the deceased, given his central place at a burial site at a castle court and his cache of weaponry, is that he was likely a warrior of some prominence and distinction.

The skeleton hints, according to researchers, at a less rigid idea of the past than that espoused by the Nazis and Soviets.

“Nazi ideology claimed a pseudo-scientific occult/archaeological [sic] Nordic supremacy argument to say the whole of Central Europe was German, Nordic, Viking in origin — and this plugged into their Aryan racist ideas,” Nicholaus Saunders, a professor at the University of Bristol and a co-author, with Frolik and Voker Heyd of the University of Helsinki on the paper, told IFL Science. “The Soviets in their own way claimed the opposite — that Slavonic peoples were key — and thus Russia or Soviet Union were paramount.”