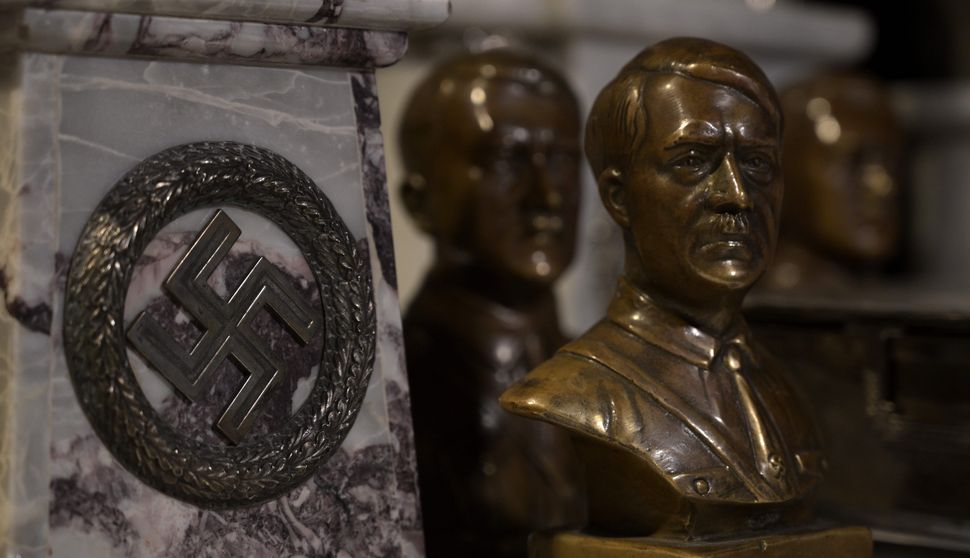 Objects set for display at the Buenos Aires Holocaust Museum – most of which were found to be forgeries. Image by Getty/JUAN MABROMATA/Contributor

Less than a month after 72 Nazi objects, seized by Argentine police, made their way to the Buenos Aires Holocaust Museum, a 32-person European delegation declared most of them to be phony.

The artifacts, dubbed “Hitler’s Silver Treasure” by the Argentinian media, included busts of Hitler, a Nazi-themed ouija board, medals and a set of calipers used for measuring the circumference of human skulls, Artnet reported.

The items were taken in a raid from the hidden stash of an antiques dealer, Carlos Olivares, in 2017. Holding on to artifacts of this nature with the intent to sell violates Argentina’s cultural heritage protection laws, Reuters reported, and Olivares, who is awaiting trial, may face up to three years of jail time.

The museum planned to unveil the collection in December, but the experts, among whom were representatives from the German History Museum and the National Police of the Netherlands, threw cold water on the idea in a report issued last week, which found that the bulk of the items were made after 1945.

The delegation determined, through observing various misspellings, dubious provenances and inscriptions of made-up companies, that only 10 of the objects were the real deal.

Stefan Klingen of the Central Institute for Art History in Munich, told Artnet news that, while many of the objects did come from the 1930s, the markings on most were applied after the war. One inscription, for the Amt für Rassenpolitik, the Department of Race Politics, Klingen noted, was just plain wrong. “The correct spelling must be ‘Rassenpolitisches Amt der NSDAP.’”

“The historical significance of these objects is low,” Klingen told Artnet, adding that, “Overall, one must assume that the objects were created for a thriving market in South America.”

Argentina, which has the largest Jewish population in South America, was also a favorite hiding spot for former Nazis, including Josef Schwammberger, Josef Mengele and Adolf Eichmann, thanks to a de facto policy of clemency from the regime of President Juan Peron.

Interestingly, despite the determination that most of the items were fake, the report suggests that museums in Germany, including the Military History Museum in Dresden and the Zeppelin Museum in Friedrichshafen, may be interested in taking some of the objects for their own collections.

The Buenos Aires Holocaust Museum told Artnet that the fake objects would not be on view come December.