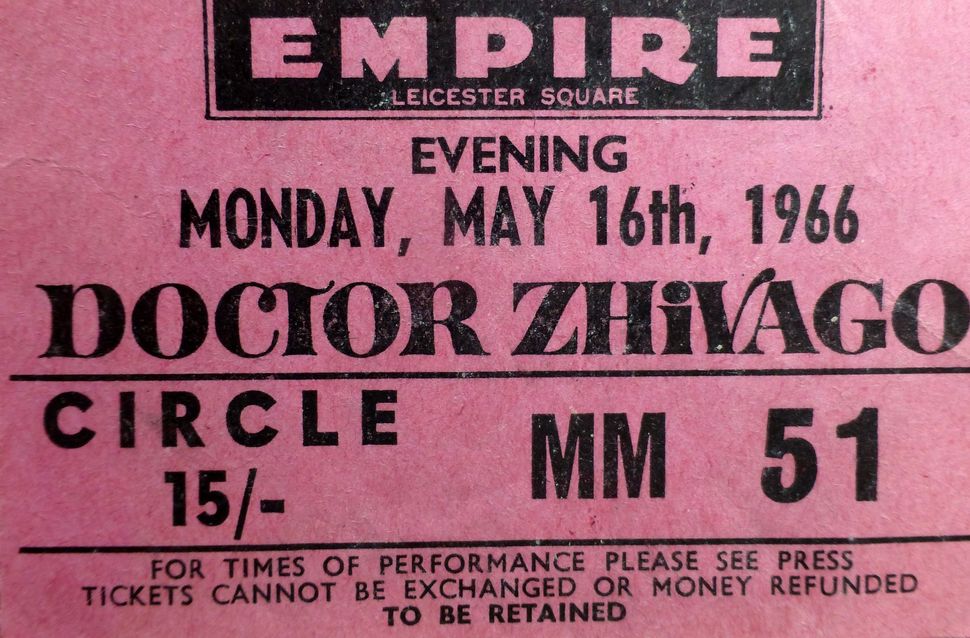 A ticket for the film “Doctor Zhivago,” based off the book by Boris Pasternak. Image by Wikimedia Commons

Over the past decade, the remarkable story of the international late 1950s effort to defy Soviet censors and secure publication of “Doctor Zhivago” has focused on the role played by western spies and spooks.

But while the CIA secretly worked to smuggle bootleg copies of Boris Pasternak’s masterpiece back into the Soviet Union — a story relayed in Lara Prescott’s buzzed-about September novel “The Secrets We Kept” — it was a Russian-Jewish émigré who played a key role in bringing it to the English-speaking world.

In 1958, the same year Soviet censors made Pasternak turn down the Nobel Prize, Manya Harari (1905-1969), who died 50 years ago this past September, published the first English language edition of the book that had earned their ire; she had translated the book alongside Max Hayward. As Pasternak’s niece, the literary scholar and translator Ann Pasternak Slater wrote in the Guardian in 2010, the pair worked at great speed. Hayward, she recalled, said he would read a page in Russian, then write it out in English, without looking back. Harari and Hayward then cross-checked and agreed on their combined version against the original. 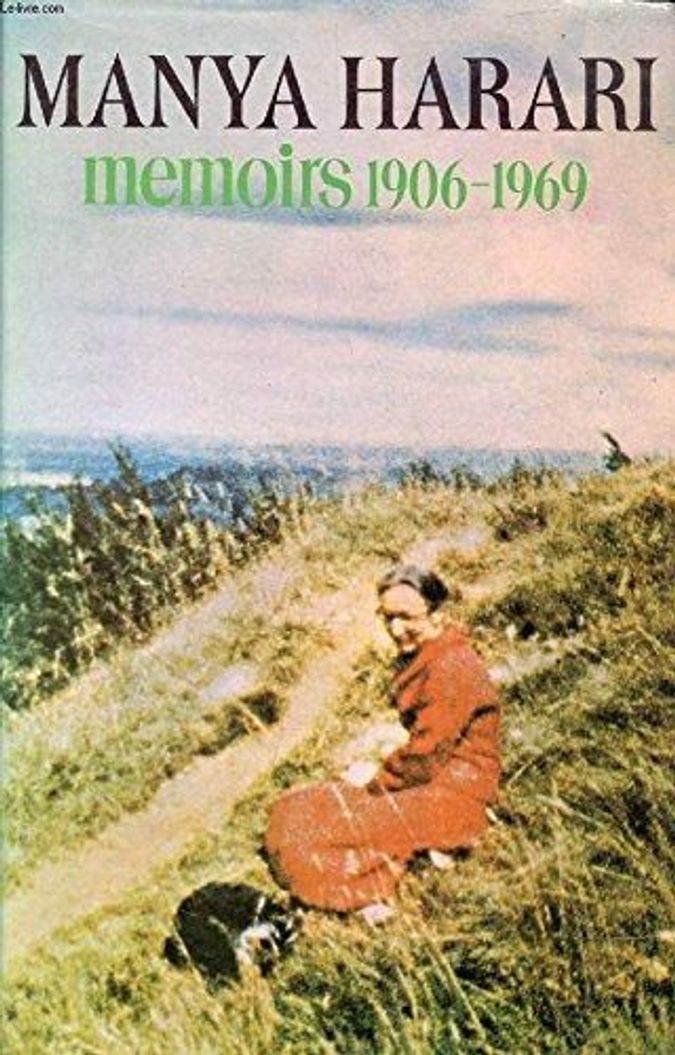 English was the second language in which ”Doctor Zhivago” appeared. After the manuscript was rejected for publication in the Soviet Union, it was smuggled out of the country, and an Italian version was published in 1957; its communist publisher was swiftly expelled from the party in response. Harari and Hayward, in contrast, were richly rewarded. Between 1958 and 1959, their translation of the book spent 26 weeks on the top of The New York Times bestseller list. Its sales quickly topped 850,000 in the United States alone.

But Pasternak was only one of a number of dissident Russian authors silenced by the Soviet authorities to whom Harari gave a global voice. As her friend and fellow translator Michael Glenny wrote in a 1972 Times of London review of her posthumously published memoirs, Harari was “the patron of modern Russian literature.”

But even beyond her role of literary doyenne, Harari’s life was dramatic enough to have belonged to a character in one of the books she ushered to English-language publication.

Her childhood in pre-revolutionary St. Petersburg was seemingly charmed. Her father, Grigory Benenson, was a wealthy Russian-Jewish financier. The Volkonsky house in which the family had an apartment had once been home to Peter the Great’s secretary, Baron Ivan Cherkassov; Princess Sofia Volkonskaya, sister of one of the Decemberists who revolted against Nicholas I; and the poet Alexander Pushkin.

Her childhood world was one of maids, governesses, cooks and coachmen, but, as she wrote in her memoirs, “as far back as I can remember, revolutionary fervour was in the air.” Harari’s cousins often brought radical young comrades back to the apartment, which sat on the banks of the Moika River. At the end of that river, Harari delighted in recalling, the Tsar resided in the Winter Palace.

Revolutionary sentiment wasn’t the only thing in the air; there was anti-Semitism, too. Harari’s mother, Sophie, told her stories about the brutal Kishinev Pogrom of 1903. In her memoirs, Harari also recalled asking her governess and maids about newspaper reports on the notorious Beilis affair, in which a Russian Jew was falsely accused of ritually murdering a Ukrainian teenage boy. (The accused was eventually found not guilty.) And, as the family marked Passover during a year in which it coincided with the Orthodox Good Friday, a small crowd threw a stone that shattered one of the apartment’s windows.

The family spent summers on a sprawling country estate at Redkino, some 80 miles north-west of Moscow, which they purchased in the name of a friend so as to evade laws preventing Jews owning land. As Harari recalled in her memoirs, local peasants viewed her father as both “a stranger and a Jew.” The threat of violence that had lingered in St. Petersburg never entirely lifted. Even so, Harari noted that the hatred had merely “brushed us.” Her lifelong fearlessness had early roots.

In May 1914, the family travelled to Jena, in Germany, in order for Harari’s adulterous father to receive treatment for an acid attack carried out by a disgruntled mistress. Initially trapped in Germany by the outbreak of World War I, Benenson, an Anglophile, eventually managed to get the family to London, where they settled — so to speak. As he was averse to domesticity, their homes consisted of a succession of luxury hotels.

Harari had a similarly restless spirit. After completing university in England, she travelled to British-mandate Palestine for the first time in 1925. There she met Ralph Harari, a wealthy member of Egypt’s Anglo-Jewish community then working for Sir Herbert Samuel, Britain’s Mandate High Commissioner. The couple married within six months and moved to Cairo. There, Harari intended to launch a campaign against the appalling conditions in the city’s factories, but, given that she was Jewish and had long lived in England, she was advised that such a plan was unwise. She instead devoted herself to charity work with Cairo’s Jewish poor, and her nascent interest in Zionism led her in 1926 to another spell in mandatory Palestine spent working on Kibbutz Geva in the Jezreel Valley.

By her third visit to mandatory Palestine in 1934, Harari had become a Catholic. Her interest in Christianity had been sparked by childhood visits to Russian Orthodox services, to which she had persuaded her reluctant governess to take her. But Harari never regarded her entry into the Catholic Church as an abandonment of her Jewishness. “I felt that to be a Christian Jew in Palestine was most fitting,” she later wrote. “I thought the link between the Jews and Palestine sacramental.”

Harari returned again in 1948 as a reporter covering the bloody conflict that saw the establishment of the state of Israel. She might have made for a surprising war correspondent, but she was intrepid in the role. As Hayward and the Anglo-Polish journalist Leopold Labedz wrote in The Times of London after her death, Harari’s “frail physical appearance [hid]… an uncommonly strong will and firmness of purpose.” Those attributes were on display as she journeyed along the treacherous road from Tel Aviv to Jerusalem, braved crossroads exposed to sniper fire and escaped without injury after a bomb hit the top floor of a restaurant in which she was enjoying borscht and stuffed fish.

But Harari’s war reporting days were a brief diversion from her work in publishing. She had co-founded Harvill Press in 1946 after spending the Second World War working as translator in London for the Political Warfare Executive, a clandestine British government body charged with spreading propaganda to enemy and occupied countries. The small publishing house, which she established alongside Marjorie Villiers, specialised in religion, the arts and psychology. It would later become an imprint of William Collins, but continue to be run by the two women.

An anonymous afterword in her memoirs argued that Harari was “above all else… a bridge builder.” Harvill’s output, it continued, was her great accomplishment, making a major impact by “introducing contemporary Russian writers to English readers.”

While Pasternak was the most influential of those writers, the works of other Soviet dissidents, including Konstantin Paustovsky, Andrei Sinyavsky, Andrei Amalrik, Yevgenia Ginzburg and Yevgeny Yevtushenko, also rolled off the Harvill presses. As Harari’s nephew, the historian Paul Rolo, wrote in Harari’s entry in the Oxford Dictionary of National Biography, the press became a home “for what might be regarded as the free voice of Russia.”

Aside from “Doctor Zhivago,” Harari is perhaps best remembered for her work on Alexander Solzhenitsyn’s “First Circle,” on which she once more collaborated with Hayward. In translating and publishing those two books, Harari helped shape the cultural narrative of the second half of the 20th century. “It is doubtful,” Glenny wrote in a review of Harari’s memoirs in 1972, “whether any two postwar novels can have made a deeper, more widespread and more lasting impact than ‘Doctor Zhivago’ and ‘The First Circle.’”

Although Harari wrote in her memoirs that her “nostalgia for Russia was intense” — she returned to the country for the first time since 1914 in 1955 and also travelled there in 1956 and 1961 — Harvill, under her leadership, didn’t confine itself to works by authors from its co-founder’s homeland. Perhaps its most significant publication beyond its Russian offerings was the English translation of Giuseppe di Lampedusa’s “The Leopard.” “What a manuscript required to qualify for Harvill’s imprint was literary quality and a humane outlook,” noted the afterword to Harari’s memoirs.

Harari pored over manuscripts in the attic of her home in Catherine Place in London’s Victoria, where she also received a steady stream of visitors. As a friend wrote in The Times of London a week after her death, Harari could be found “guarded by a devoted, ineffectually pugnacious and unattractive dog, at her side a package of at least 100 cigarettes and a box of the best possible chocolates.”

By the time that Harari found out she was dying of cancer in early 1968, her husband was already seriously ill. She chose not to worry him and kept her diagnosis secret; when she died four months after him in 1969, the memoirs on which she had been working were incomplete. The draft she left behind ends with her stay at the kibbutz; her diaries from her 1948 reporting on Israel’s war of independence and her visits to the Soviet Union only partially fill the gaps.

As The Times of London noted in an obituary the day after her death, Harari was “very much more than a translator.” “She was… an intermediary between two literary cultures in both of which she felt equally at home,” the unnamed obituarist wrote. “Her exceptional literary flair made her one of the few translators who by their example set the highest standards in the difficult work of bringing about greater understanding of another culture.”