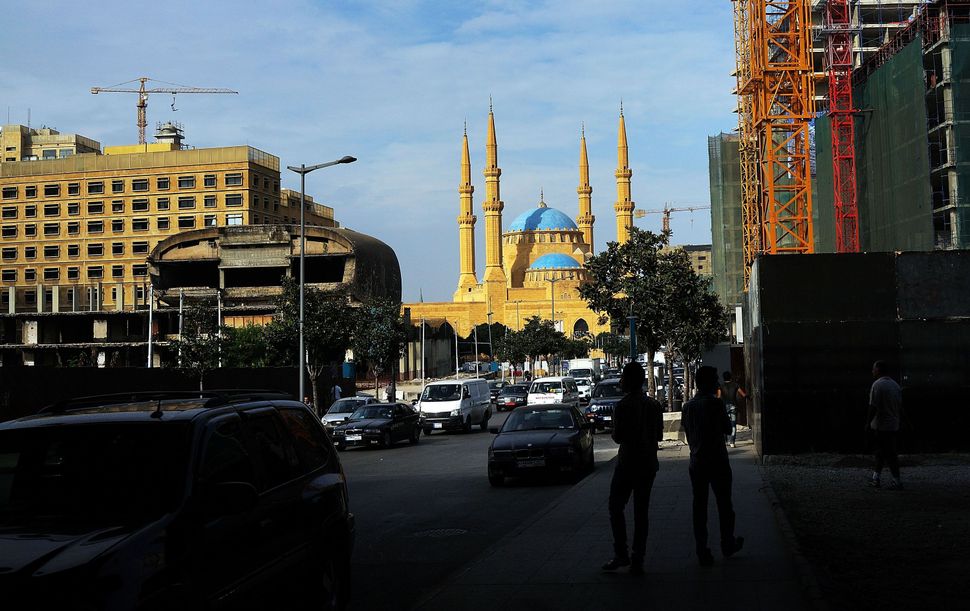 After a spate of online outrage, Lebanese authorities have removed a sculpture from Beirut’s Martyr Square. The reason? If viewed from above, the geometric artwork appears looks like a Star of David.

According to Hyperallergic, the sculpture, British artist Nathaniel Rackowe’s “LP46,” became the center of a controversy on December 15, when a photograph of the piece taken from a nearby balcony showed that viewed from above, the sculpture resembles a Magen David. The six-pointed star is a symbol of Judaism and appears prominently on the Israeli flag; Lebanon and Israel have been in conflict since the Jewish state’s founding in 1948.

“What is this star doing on top of these ancient rocks at the center of Beirut? Can somebody explain this to us?” the news site SouthLB captioned the image on its Twitter account, according to Hyperallergic’s translation. The post became the center of widespread fury, and even sparked rumors that the sculpture, which has been in the square since June of 2018, was planted by economic and political protesters — despite the fact that the protests mentioned only began in fall 2019. Those protests, which use the square as a meeting place, led to the resignation of Prime Minister Saad Hariri on October 29.

Beirut Governor Removes Statue in Heart of City Because It Remotely Resembles Star of David pic.twitter.com/XgbEW5V2Xy

Following Shabi’s decision, Rackowe issued a statement explaining the meaning of his work.

“The sculpture was inspired by the architecture and structures I saw around Beirut,” the statement said “The bones of new buildings being built, and old buildings coming down. I used light to transform the hard material of steel, as a means to reveal beauty in the city.”

Beirut’s Latitia Gallery, which commissioned the sculpture, said in an email to Hyperallergic that “the artwork is supposed to be seen from front and side and not from above.”

The gallery added that “the mentioned star is composed of two equal and opposite triangles and does not resemble the art piece at all.”

Some Lebanese Twitter users questioned the move on the part of the governor, noting that Beirut is still in the throes of protests against a stagnant economy and political corruption that began two months earlier.

“The governor of #Beirut requested that an art installation be taken down because it looks like the Star of David from a certain angle,” tweeted journalist Luna Safwan. “Do we even need to discuss or comment on the priorities in #Lebanon? #LebanonProtests.”

The night before the governor ordered the sculpture’s removal, Lebanese security forces fired tear gas and rubber bullets at protesters in Beirut. Over 130 were injured.