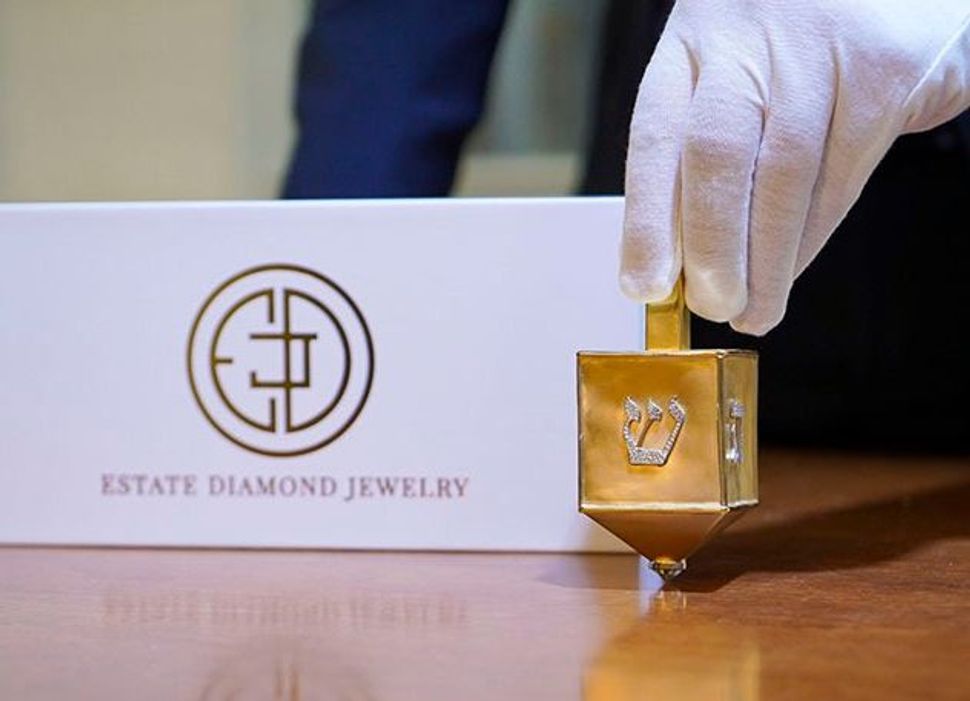 A New York diamond dealer has just set a Guinness World Record for the world’s most valuable dreidel, valued at $70,000. With a hand-made body composed of 18 karat gold, symbols inlaid with diamonds and a 4.20 carat diamond at the top’s point, Estate Diamond Jewelry’s sales manager Benjamin Khordipour says the idea for the pricey dreidel preceded the ambition to set a record.

“We’re always looking for something judaically beautiful,” Khordipour told the Forward over the phone. This year, Estate Diamond Jewelry wanted to make something fun for kids and tied to a festive holiday. The team settled on a dreidel, which a jeweler made over the course of four months. As they started working, the shop realized they might well make the Guinness books.

There isn’t much in the way of competition, Khordipour said. The more valuable pieces of Hanukkah Judaica are typically menorahs. However, there is a previous record-holder for a dreidel valued at $14,000.

That other record-holder, conceived of by the Chabad of South Palm Beach, Florida, was a bit busier design-wise than the Estate Diamond’s piece, which was crafted with minimalism in mind.

Drawing inspiration from the Art Deco design of the Chrysler Building, a few blocks from Estate Diamond’s showroom, the dreidel’s sleek Hebrew letters and clean-lined profile looks like a Jewish artifact from the Jazz Age.

But can you spin it?

“We gave it a few spins for Guinness,” Khordipour said, but added that the spins were performed on a soft surface. “We’d rather spin it as little as possible, but it is functional.”

If you’re interested in buying the dreidel this Hanukkah, we have some bad news.

“We’re getting some calls, but as of now it’s not for sale,” Khordipour said. “It was something we wanted to make for ourselves.”