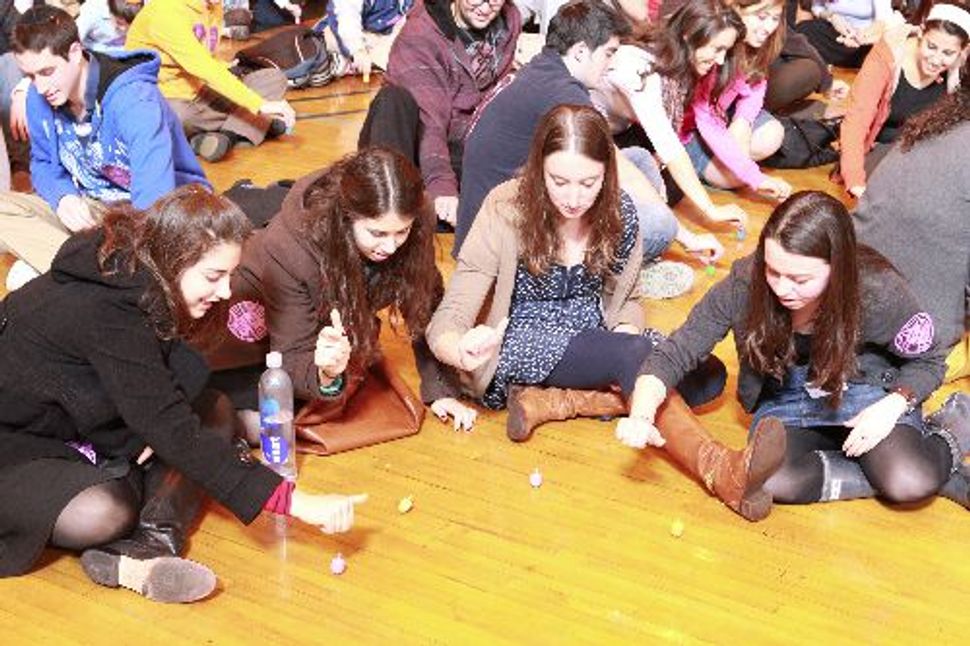 The dreidel will rock! Students at Yeshiva University crowded a gymnasium last night to break the world record for the largest number of people spinning dreidels at one time. An astounding 618 to be exact, easily top-pling the previous record of 541 set by Temple Emanuel at Cherry Hill, N.J., in 2005. The event was not leftist but 618 revolutionists were present and accounted for.

Tension was high as the microphone announced the countdown. Then, the whole dizzying feat lasted only 10 to 20 seconds, after which whoops of cheering filled the auditorium to its rafters. The crowd roared again when “Dreidel Palooza” co-organizer Jason Katz announced that they had the world record at 582 spinners. As if on cue, the song “We are the Champions” boomed over the speaker system. (Saying that one sheet had not been counted, Katz later announced that they in fact had 618 participants. As co-organizer Fiona Guedalia deftly spun it: “We beat our own record.”)

The total number of the spinning dreidels generated enough energy to light a menorah not for eight days but more like 80. Some dreidels spun from left to right, others from right to left, as though taking into account both reading styles, Hebrew and English. Some younger folks were playing “Spinagogue” a kind of dreidel game inside a small, toy Star-of-David shaped arena.

But the evening was much more than just fun. They were spinning for scholarships. Katz said with more than seven out of 10 students receiving tuition assistance, the evening “was a way to give back to the university that has given so much to us.” This marketing and international business major was speaking of real money, not tin-foil-wrapped Hanukkah gelt: proceeds from raffle tickets raised money for “Students Helping Students,” a group that helps undergraduate scholarships.

Guedalia, a Stern College for Women junior in psychology and minoring (“hopefully” she said) in photography, said the evening was a way to have fun and help others. “What better way than breaking a record?” Likewise, said a sophomore, Tzvi Solomon, “What this shows is the unity of the student body coming together.” At the after-party, a new campus a capella group called the Y-Studs sang songs such as the Hebrew version of the Beatles song “Let It Be.” During one song, they made a human menorah extending their arms with cigarette lighters to represent individual flames. Just why did a new a capella group form? “There was an excess of talent on campus,” modestly commented Nathaniel Jaret, one of the singers.

Appropriately named for the Festival of Lights, the campus has another a capella group, amusingly called “the Maccabeats.” (This is almost as funny as a Reconstructionist singing group that once named itself “ApiChorus”).

The dreidel triumph last night may not be the only world record that Yeshiva University shatters. This is, at least, according to Sam Weprin, a Ronald P. Stanton Presidential Fellow, who stepped outside holding a large megaphone. “Next year,” his voice blared, “the world’s largest latke.”